Professorship for astronautics will honor alumnus Ronald McNair, who died in the 1986 Challenger explosion 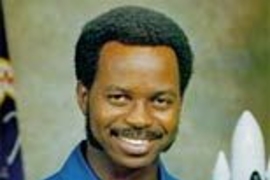 To honor the memory of MIT alumnus Ronald E. McNair (Ph.D. 1976), an astronaut who was killed in the tragic explosion of the Challenger space shuttle on Jan. 28, 1986, NASA and MIT have established a teaching and research position in his name. The Ronald E. McNair-NASA Visiting Professorship in Astronautics at MIT builds on a long tradition of cooperation between NASA and MIT.

"MIT has always been key to NASA's success. Our people, technology development and scientific investigations have been intertwined since the earliest days of the space program," said William Readdy, NASA associate administrator for space operations. "This professorship is a new opportunity for NASA and MIT to work together to educate a generation of students who will help us achieve the Vision for Space Exploration."

MIT's Department of Aeronautics and Astronautics has two former astronauts on its faculty--professors Laurence Young and Jeffrey Hoffman--and works closely with NASA on many research projects. The Institute has 33 alumni from many different departments who have become astronauts--more than any other non-military institution in the U.S. Those alumni have flown in more than one-third of the nation's space flights.

The professorship will be a rotating position for a NASA scientist or engineer to teach and conduct research for at least a year in the Department of Aeronautics and Astronautics. Funding for the professorship will come both from NASA and MIT, and the institutions will work together to select candidates for the position.

"Reggie, Joy and I are elated to hear about the creation of the Dr. Ronald E. McNair-NASA Visiting Professorship by two great institutions he was devoted to," said McNair's widow, Cheryl McNair, on behalf of the couple's two children. "We look forward to working together on future opportunities to honor Ron's legacy and commitment to youth."

MIT's Building 37, which houses the Center for Space Research and part of the aeronautics and astronautics department, was renamed the McNair Building following the Challenger's explosion. The space shuttle had just launched when it exploded in air, killing McNair and his six crewmates: Francis R. Scobee, Michael J. Smith, Judith A. Resnik, Ellison S. Onizuka, Gregory B. Jarvis and S. Christa McAuliffe.

McNair earned his doctorate in physics from MIT in 1976, doing early developmental work on high-pressure lasers. He first flew on the Challenger in 1984. He was the first person to operate the shuttle's robotic arm, using it to position a fellow crewmember during a spacewalk. His next mission aboard Challenger ended tragically.

"Dr. McNair was a champion for education and his life epitomized educational excellence. This cooperative agreement means not only inspiring the next generation of leaders and explorers but also provides students with learning experiences that support educational excellence in science, mathematics, engineering and technology while improving scientific literacy," said Adena Williams Loston, chief education officer for NASA. The Vision for Space Exploration calls for an affordable "stepping stone" strategy of human and robotic missions to achieve new exploration goals of returning humans to the Moon and journeying to Mars and beyond.