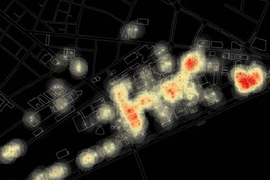 ↓ Download Image
Caption: A screenshot from an animation showing the changing patterns of wireless Internet activity during 24 hours on the MIT campus. Red indicates a large number of users per access point, black a small number.
Credits: Image / iSpots

Caption:
A screenshot from an animation showing the changing patterns of wireless Internet activity during 24 hours on the MIT campus. Red indicates a large number of users per access point, black a small number.
Credits:
Image / iSpots

Blanket wireless service is reason enough to celebrate on a campus where most of the 10,000 students own laptop computers and many work into the not-so-wee hours of the morning. IS&T and the MIT Museum are commemorating the achievement with an exhibition called "iSpots," which features three electronic real-time maps of campus wireless use projected onto large Plexiglas rectangles that appear to float in the room.

"Laptops and WiFi are creating a revolutionary change in the way that people work," said Carlo Ratti, architect and director of the SENSEable City Lab in MIT's Department of Urban Studies and Planning. "iSpots aims to visualize these changes by monitoring the traffic on the wireless network and showing how people move around campus.

"The maps provide quantitative evidence that people on the campus really are using WiFi nearly 24 hours a day. I suspect that MIT today represents the world of the future in this regard," said Ratti.

"Having a fully wireless campus means people can be assured of using their computers anywhere they go," said Jerrold Grochow, MIT's vice president for information services and technology. "As more IP-based devices come into being, I think we'll see a major change in the way members of the community interact. And as wireless goes even further, perhaps throughout Cambridge, the concepts of campus and community will blend even further. With iSpots, we'll be able to focus improvements to the wireless grid and begin to anticipate these changes." Grochow said even the campus playing fields will have wireless service in the next year.

The iSpots maps show that wireless use in the dormitories increases after 5:30 p.m., peaks around 10 p.m., then drops until it plateaus from 2 to 8 a.m. Even at its lowest point, wireless access holds at about one-third of the peak usage. Business hours (9 a.m. to 5 p.m.) are the peak time for total wireless use on campus, with administrative and classroom buildings starting to increase at about 8 a.m.

The Sidney-Pacific graduate residence hall (NW86) and MIT Sloan (E51) frequently tie for most wireless use, according to urban studies and planning graduate student Sonya Huang, a member of Ratti's research group. "Planning is inherently ahistorical," said Huang. "What's interesting about this project is it gives real-time information that planners can later use to make decisions."

Campus denizens can access iSpots from their laptops on the SENSEable City Lab web site and can choose to identify their own red spots of wirelessness as they move from dorm to classroom. While most of the maps use anonymous data, a few people have already chosen to identify themselves on one of the maps, e.g. Joe and Dan were logged on at noon on Nov. 1 in Building W61.

They have logged many hours on MIT's WiFi network at all hours to create iSpots, a project that proves the campus never sleeps.

A version of this article appeared in MIT Tech Talk on November 2, 2005 (download PDF).