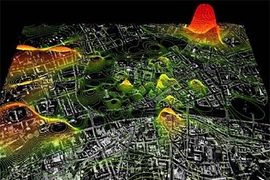 Can you see me now?

Researchers at MIT may not be able to hear your cellphone call, but they have found a way to see it. They mapped a city in real time by monitoring the usage of tens of thousands of cellphones.

The researchers used three types of data -- density of cellphone calls, origins and destinations of the calls, and position of users tracked at regular intervals (the latter need to register and voluntarily give their consent via text message) -- to create computer-generated images that can be overlayed with one another and with geographic and street maps of a city to show the peaks and valleys of the landscape as well as peaks in cellphone use.

"For the first time ever we are able to visualize the full dynamics of a city in real time," said project leader Carlo Ratti, an architect/engineer and head of the SENSEable City Laboratory at the Massachusetts Institute of Technology. "This opens up new possibilities for urban studies and planning. The real-time city is now real: a system that is able to continuously sense its condition and can quickly react to its criticalities," he added.

In recent years, techniques to locate and track mobile devices have become increasingly available; such techniques were crucial to law enforcement officials in their investigation of the Madrid and London terrorist bombings. MIT's Mobile Landscapes project takes advantage of these techniques at an unprecedented scale by mapping an entire urban region continually at regular intervals.

The continuously changing electronic maps, which have a surprising aesthetic appeal, will be displayed at the M-City Exhibition at the Kunsthaus Graz from Oct. 1 to Jan. 8. Visitors to the show will be invited to participate in the electronic tracking by sending text messages to a server. "This participatory act aims to engage them in the issues of social networks and distributed interaction, but also on the possible drawbacks of limited privacy and geographical surveillance," Ratti said.

The research could also have implications for use in large-scale emergencies and for transportation engineers seeking ways to better manage freeway traffic.