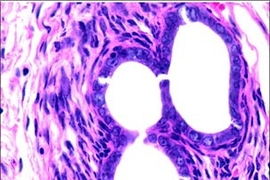 ↓ Download Image
Caption: In these endometriosis lesions from the mouse model of endometriosis, both endometriotic glands (arrow) and stroma (arrowhead) are shown.
Credits: Images / MIT Center for Cancer Research 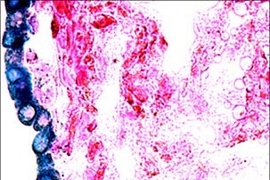 ↓ Download Image
Caption: Section of a mouse ovary shows that the cells on the surface (blue) contain the mutant version of the Kras oncogene. 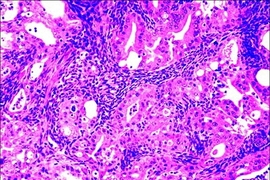 ↓ Download Image
Caption: Ovarian cancer cells can be seen infiltrating the outer layer of the ovary in the mouse model of ovarian cancer.

Caption:
In these endometriosis lesions from the mouse model of endometriosis, both endometriotic glands (arrow) and stroma (arrowhead) are shown.
Credits:
Images / MIT Center for Cancer Research

Caption:
Section of a mouse ovary shows that the cells on the surface (blue) contain the mutant version of the Kras oncogene.

Caption:
Ovarian cancer cells can be seen infiltrating the outer layer of the ovary in the mouse model of ovarian cancer.

A new study from the MIT Center for Cancer Research (CCR) provides the first mouse models of endometriosis and endometrioid ovarian cancer, two major gynecologic diseases that are frequently associated with each other in women.

The work was reported in an advance online publication in Nature Medicine on December 26.

Endometriosis is a benign gynecologic disease characterized by the presence of functional uterine tissue outside the uterus. This disease is extremely prevalent in the general population and it is a major cause of infertility; moreover, women with a long history of endometriosis are also at an increased risk for developing endometrioid ovarian cancer, a subtype of epithelial ovarian cancer. Ovarian cancer is the leading cause of death among gynecological cancers, due in part to the difficulty of early detection and lack of effective therapies.

"This is a key breakthrough in our efforts to understand the development of two important diseases of women," said Tyler Jacks, leader of the MIT team and CCR Director.

Daniela Dinulescu, a postdoctoral fellow in the Jacks lab and first author of the study, found that mutation in the K-ras oncogene or the Pten tumor suppressor gene in the mouse ovary resulted in the development of ovarian endometriosis-like lesions. Furthermore, she went on to show that peritoneal endometriosis could also be induced in mouse models through activation of oncogenic K-ras mutations.

"Not only is this the first model of spontaneous endometriosis in mice, but it is also the first evidence that genetic factors contribute directly to the induction of this disease," said Dinulescu.

But the researchers did not stop there. "My goal when I began this research was to develop an animal model of ovarian cancer," explains Dinulescu. "It was thought to be extremely difficult to model ovarian cancer in mice, but the absence of detection methods and limited treatment options for this disease in humans motivated me to pursue this project further."

The key discovery was made when Dinulescu showed that the combined mutation of K-ras and Pten in the ovarian surface epithelium gave rise to endometrioid ovarian tumors. Of note, both Kras and Pten genes are commonly mutated in human ovarian cancer.

"The combined mutation of K-ras and Pten in the ovaries gives rise to an ovarian cancer that is extremely aggressive and widely metastatic, and is highly reminiscent of the human disease," said Jacks, who is also the David H. Koch Professor of Biology and an Investigator for the Howard Hughes Medical Institute.

Jacks continued, "Not only did we create new mouse models for two important gynecological diseases, but also this research provided evidence for a genetic link between endometriosis and ovarian cancer and may explain why some women who have endometriosis also develop ovarian cancer."

Importantly, these mouse models will be invaluable for studying the genetics and pathophysiology of the two diseases and for developing novel therapeutic strategies.

This work was supported by grants from the National Cancer Institute and the Howard Hughes Medical Institute. Support for Dinulescu comes from the American Cancer Society, the Shoreline Circle of Hope, and the Anna Fuller Fellowship Fund.