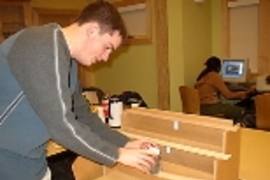 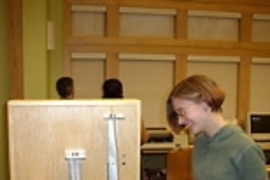 ↓ Download Image
Caption: Ellen Cappo shows the column-buckling demonstration. The white bucket on the right transmits identical loads to the three wooden columns. As the bucket's load is increased, the columns buckle, starting with the longest one.
Credits: Photo / Lorna Gibson

Caption:
Ellen Cappo shows the column-buckling demonstration. The white bucket on the right transmits identical loads to the three wooden columns. As the bucket's load is increased, the columns buckle, starting with the longest one.
Credits:
Photo / Lorna Gibson

Thanks to an MIT class on the engineering principles behind trees, visitors to the Boston Nature Center and the Museum of Science can now explore for themselves such things as why a tree can only grow so tall.

Last fall, six freshmen led by Professor Lorna Gibson studied the structure and properties of wood and how trees work mechanically. Along the way they created posters explaining what they'd learned about three different phenomena and proposed simple demonstrations for a hands-on understanding of each. One of Gibson's graduate students, Abel Hastings (S.M. 2004), then built the demos with the assistance of the freshmen.

Separate sets were recently installed at the two museums; a third will go into MIT's new undergraduate laboratory for the Department of Materials Science and Engineering. They are complemented by a web site at http://web.mit.edu/naturalmaterials.

"The Engineering of Trees" was one of 70 freshman advising seminars offered last semester (FAS). An alternative to traditional freshman advising, an FAS allows small groups of freshmen to explore sometimes offbeat topics with the professor who is also each student's academic advisor for the year. The trees course was a service-learning FAS designed to teach students through community service.

The students first tackled tree height, showing that it is controlled by "column buckling." In other words, as the tree gets taller, its weight increases, and at some point the trunk buckles under its own weight. That process can be described mathematically by the Euler equation.

In a column-buckling demo, ball bearings are added to a small bucket to transfer increasing amounts of load to three different "trunks," or dowels of different diameters. "Then you can weigh the ball bearings to see how much load it takes for each column to buckle," said Gibson, the Matoula S. Salapatas Professor of Materials Science and Engineering. The demo also works with dowels made of different materials or of different lengths. Ultimately, by punching the numbers associated with a given demo into the Euler equation, budding scientists can test its veracity.

A second demonstration on the microstructure of wood shows why the material is so much stiffer when load is applied along the grain rather than across it. Large rubber honeycombs representing the microstructure are used to show what happens to the "cell walls" when compressed in the two different orientations.

In a third demonstration, the team explores glue-laminated wood, or thin strips of wood that are glued together in layers. "Glulam" wood is an important engineering material, Gibson said, because, among other things, larger sections can be built up than can be obtained from a single tree (glulam pieces have been made up to 140 feet long). Curved shapes, like the wooden arches supporting a bridge, also can be made by bending each layer around a mold before gluing them together.

The demonstration adds the same weight to the center of three beams of the same thickness. One of these beams is made of five glulam layers of wood, another is solid wood, and the third is composed of five layers of wood that are not glued. The demo shows that glulam beams are just as stiff as solid beams, and that unglued layers are much more flexible.

The freshmen who were in Gibson's FAS are Ellen Cappo, Will Etheridge, Yushan Kim, Brian Manley, Sean Torrez and Hanhan Wang. Gibson has joint appointments in the civil and environmental engineering department and the mechanical engineering department. Funding for the "tree" projects was provided by the Alumni Excellence in Education Fund.

A version of this article appeared in MIT Tech Talk on February 25, 2004.