A dab relieves pain of the jab 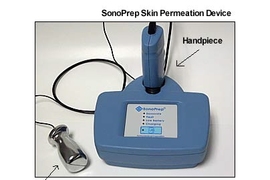 Fear of needles could become a thing of the past.

A painkilling device approved Aug. 17 by the FDA could offer relief to children and adults who hate the sharp stab of pain that comes with needles and IVs.

The medical device, called SonoPrep, uses an ultrasonic method created by MIT researchers to make skin temporarily more permeable. A painless 15-second treatment by the new device, followed by an application of lidocaine cream, will anesthetize the skin in five minutes. By itself, lidocaine takes one hour to work.

Because the method is simple and painless, and speeds up the action of lidocaine--a topical anesthetic commonly used in pediatrics and on critically ill adults and children who must endure repeated needle sticks--it could become standard procedure in doctor's offices and hospitals. Another use would be before painful procedures such as angiography, balloon angioplasty, and the insertion of venous catheters.

"Its wonderful to see the research we did at MIT get to the point where it can help people and relieve pain," said Robert Langer, the Germeshausen Professor of Chemical and Biomedical Engineering at MIT, who developed the device along with colleagues Joseph Kost and Professor Daniel Blankschtein of MIT's Department of Chemical Engineering, and MIT alumnus Samir Mitragotri (MIT Ph.D. 1996), who is now on the faculty of the University of California at Santa Barbara.

The scientists founded Sontra Medical Corp. of Franklin, Mass., which manufactures the SonoPrep device and will begin marketing it in September, at an expected price of $2,000 each. Langer, who is well known in the scientific and medical communities for his work developing new principles and materials for controlled drug delivery and tissue engineering, is a director and chairman of the scientific advisory board of the company.

The small, battery-powered device applies a low-frequency, ultrasonic energy to the skin for 15 seconds. The sound waves open small cavities in the skin by disorganizing the lipid bi-layer, creating tiny, reversible channels through which fluids can be extracted and delivered. The skin goes back to its normal state within 24 hours.

"The best thing is that approval of this device opens the door to many new uses such as glucose-sensing or insulin delivery for diabetics," said Langer, who explained that the microscopic openings created in the skin are much too small to see, but large enough for molecules relevant to medicine to pass through.

Ultimately, the SonoPrep device could be coupled with other devices that sense the level of sugar in a diabetic's blood and/or deliver insulin or other medication to the blood. The scientists believe that the same mechanism can be used to deliver routine vaccinations painlessly within the next five years.

Original work at MIT on this technique was funded by the American Diabetes Association, the Juvenile Diabetes Foundation, the United States-Israel Binational Science Foundation and the U.S. Centers for Disease Control.