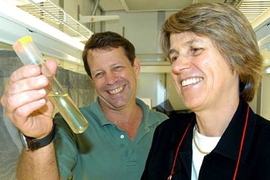 Marine microbes shape the chemical composition of the Earth's oceans and atmosphere, yet we know essentially nothing about them. Now, thanks to major grants from the Gordon and Betty Moore Foundation, MIT researchers aim to learn dramatically more about some of the most important organisms on the globe.

Professors Penny Chisholm and Ed DeLong are among the four Moore Foundation Investigators in Marine Science selected nationally. Each inaugural investigator will receive almost $5.5 million over the next five years through the foundation's new marine microbiology initiative, which was established to "generate new knowledge regarding the composition, function and ecological role of microbial communities in the world's oceans," according to foundation literature.

President Charles M. Vest applauded the Moore Foundation for its decision to make this major commitment to understanding the genetic inventory of microbial ecosystems in the ocean and the role they play in critical planetary processes.

"The marine microbiology initiative will generate important new knowledge for the future of our planet and will establish the Gordon and Betty Moore Foundation as a leader in funding scientific research in this emerging field," said Vest.

Dean of Engineering Thomas L. Magnanti said the work of Chisholm and DeLong exemplifies MIT's strong commitment to environmental sciences and engineering, and to research and education that crosses conventional disciplinary boundaries to address complex problems of great importance.

"It is very gratifying that the foundation has chosen Penny and Ed as Moore Investigators," said Magnanti.

Chisholm's research over the past decade has focused on the ecology of Prochlorococcus, the smallest known photosynthetic cell and the most abundant microbe in the sea. A biological oceanographer, she was a part of the team that first discovered the organism in 1985.

"I am thrilled about the Moore funding because it allows us to take more risks in our research and relieves us of the annual grant-writing pressure. But I am even more excited about the visibility the Moore marine microbiology initiative will give our field. The introduction of genomic analyses to marine microbial systems has triggered an exciting paradigm shift in biological oceanography, and the Moore initiative will play a key role in this," said Chisholm, the Lee and Geraldine Martin Professor of Environmental Studies, who holds appointments in the Department of Civil and Environmental Engineering (CEE) and the Department of Biology.

DeLong, who joined the MIT faculty in July after seven years at the Monterey Bay Aquarium Research Institute, is well known for inventing new approaches for studying microbes.

"The broad activities of my lab are all centered about the use of new technologies, especially genomic technologies, to learn more about the natural microbial world. The Moore support represents an incredible, enabling boost to our efforts, and that of the field as a whole. This is a voyage of discovery, and is contributing to both knowledge creation as well as applied tools and technologies for biomedicine, biotechnology and bioengineering," said DeLong, who holds appointments in CEE and the Biological Engineering Division.

"One great thing about being here at MIT is that a lot of new technologies needing further development for environmental/ecological applications are all front and center on the research and development agenda here. These include genomics, computational biology, systems biology, sensor technology, and ocean engineering."

MIT has a history of research in the environmental sciences through programs like the Earth System Initiative (ESI), which Chisholm co-directs with Professor Kip Hodges of the Department of Earth, Atmospheric and Planetary Sciences. ESI was launched in 2002 to better understand how the Earth functions from the molecular to the global scale or, in the case of marine microbes, from the genomic to the ecosystem level.

To that end Chisholm, DeLong and CEE Associate Professor Martin Polz, who also specializes in marine microbiology, are forging alliances with researchers from across MIT to plumb the secrets of the ocean's tiniest denizens. (Polz is an investigator with the Woods Hole Center for Oceans and Human Health, which was formed in May with funding from the National Science Foundation and the National Institute of Environmental Health Sciences, one of the National Institutes of Health.)

"It is the foundation's goal not only to support the top scientists in marine microbiology, but to stimulate close collaborations between these scientists to accelerate even further progress in this key area of ocean research," said David Kingsbury, director of marine science for the foundation.

The foundation was established in November 2000 by Intel co-founder Gordon Moore and his wife Betty to create positive outcomes for future generations. Its principal areas of concern are environmental conservation, science, higher education, and the San Francisco Bay Area.

A version of this article appeared in MIT Tech Talk on September 22, 2004 (download PDF).