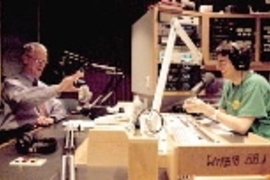 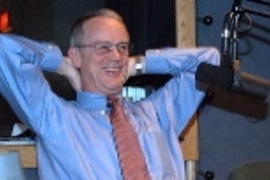 Maria Zuber listened to "Slide" by the Goo-Goo Dolls during the many plane trips she took while serving on a government review panel. Alan Oppenheim loves the percussion of stomping Irish dancers. And President Charles M. Vest gets "thrills up his spine" when he listens to a certain song from "Cats."

These tidbits provide just a taste of the fare on junior Eric Chemi's radio show on WMBR (88.1 FM), "Dinnertime Sampler," which offers a peek under the academic veneer of MIT professors and administrators on Wednesday evenings from 6:30 to 8 p.m. Guests bring their favorite CDs to play, and between songs, they chat with Chemi, a junior in electrical engineering and computer science.

"I love the show because it provides a window into the culture of MIT and the surrounding community," said Zuber, head of the Department of Earth, Atmospheric and Planetary Sciences. "The shows are all over the map in terms of genre, and from one week to the next you have no idea what kind of music you'll hear. It provides a wonderful cross-section of the diverse personalities that make up MIT."

During his appearance with Chemi earlier this month, Oppenheim, who joined the electrical engineering faculty in 1964, called himself "an MIT lifer" and described how he came to MIT "by accident" as an undergrad.

But his first semester wasn't easy. He described a letter he wrote to his mother in New York--"I'm getting out of here and going somewhere else that's a lot more fun," he wrote.

"But somewhere along the way I got captured by it ... Maybe someday I'll leave," he said.

Zuber talked about planning for the 2004 Mars rover missions when she appeared on Chemi's show last November. She brought along the Indigo Girls' "Galileo" as "a statement for academic freedom." She also brought a recording of Joey Ramone singing "What a Wonderful World," the song made popular by Louis Armstrong, and one of Tom Jones and Chrissie Hynde (yes, Tom Jones and Chrissie Hynde together) singing Iggy Pop's "Lust for Life."

The show's conversation and music format started two years ago on a whim. Chemi had jokingly invited his physics professor, Walter Lewin, to join him on his radio show, which in those days aired at six o'clock in the morning.

"He arrived at 5:45 with this tape recording of Tibetan monks singing, and one of frogs," said Eric about his first guest. "The phones just started lighting up. So I decided to make it recurring."

And recur it has, on WMBR most Wednesdays since October 2002. Guests have included professors Alex Slocum of mechanical engineering, Evan Ziporyn of music and Steven Pinker of psychology (now at Harvard), and MIT treasurer Allan Bufferd.

Tonight's guest is Vest, who will share some of his favorite tunes and tell a few stories about his childhood in West Virginia.

So listen in. And keep this in mind--caller three wins a giveaway from the prez.