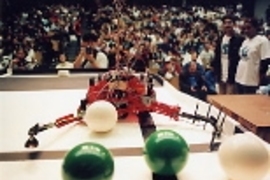 ↓ Download Image
Caption: MIT's annual autonomous robot-building course, 6.270, consumes mountains of LEGOs and round-the-clock adrenalin from its eager participants. Teams work throughout IAP to create the snappish little rovers, each with its unique plot for victory. The course culminated in a frenzied contest, held in Room 26-100, on Jan. 30.
Credits: Photo / Donna Coveney 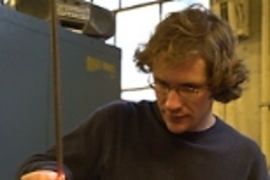 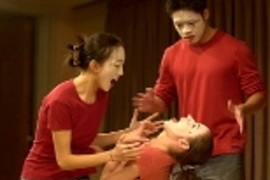 Caption:
MIT's annual autonomous robot-building course, 6.270, consumes mountains of LEGOs and round-the-clock adrenalin from its eager participants. Teams work throughout IAP to create the snappish little rovers, each with its unique plot for victory. The course culminated in a frenzied contest, held in Room 26-100, on Jan. 30.
Credits:
Photo / Donna Coveney

Two teams of MIT students presented practical first steps for the City of Cambridge to take on its journey towards drastic reductions in greenhouse gas (GHG) emissions at a lively and optimistic event on Jan. 30 in Room 6-120.

Adopted in December by the City Council, the City's progressive Climate Protection Plan calls for a 20 percent reduction in the city's 1990 GHG emissions level by 2010.

Students, faculty and members of the MIT administration and City of Cambridge officials participated in the event, the culmination of an IAP course, "Implementing the Cambridge Climate Protection Plan."

Paul Parravano, co-director of MIT's Office of Government and Community Relations, provided opening remarks. Amanda Graham, education program manager for the Laboratory for Energy and the Environment at MIT and the lead instructor in the IAP class, served as moderator.

Henrietta Davis, vice mayor of Cambridge and chair of the City Council's Health and Environment Committee, commented with enthusiasm for the project.

"We need your help to reach our goal. We want to make the university-city collaboration the powerhouse behind climate protection. MIT has taken an environmental leadership role with the Cogen plant. And we challenge you to do more," said Davis.

One student team focused on innovative strategies to get Cambridge residents to purchase "green power"-such as solar or wind power-instead of "brown power," which consumes fossil fuels. The other presented ideas for increasing sales of hybrid and high fuel-efficiency cars in Cambridge.

Both teams utilized a marketing strategy known as Community-Based Social Marketing, a method that uses social context to promote change.

The Laboratory for Energy and the Environment, the Department of Political Science, and the Public Service Center sponsored the collaborative teams.

Stronger than the Kyoto treaty, the Climate Protection Plan calls for incremental reductions in seven energy areas including electricity use; natural gas and oil consumption; vehicle miles traveled in the city, and solid waste creation.

"MIT is very interested and committed to taking action," said Daniel H. Winograd, MIT's environmental counsel. "We're trying very hard to look at recycled papers, recycled toner cartridges to stimulate the market and help do some good by buying those products that are going to place less demand on [the environment]."

Four top science journalists representing media from Nova to Newsweek shared tips for breaking into the field at a Jan. 28 IAP session. Their own histories indicate that there's really no straight career path.

Regardless of how they established themselves, the four stressed the importance of clips (samples of published articles). It also helps to have mentors and to be humble.

How do you go about getting yourself published? Stories in student papers count. In addition, "there are 1,000 magazines out there, maybe more, and they're all hungry for copy," said Adam Rogers, a science, technology and medicine reporter for Newsweek.

Trisha Gura is a freelance science writer whose work has appeared in publications from Nature to Good Housekeeping. Although she has a Ph.D. in molecular biology, she decided to write about science rather than practice it. A few science journalism classes and a science-writing fellowship helped pave the way for an eventual position at the Chicago Tribune.

Is an advanced degree necessary to become a science writer? Gura noted that her Ph.D. "does help me with writing for magazines like Science and Nature, because I know the scientists' language," but "if you're getting a Ph.D. just to be a really good science journalist, I don't think I'd advise it."

The 2003 session of Charm School was a roaring, well-mannered success.

More than 600 members of the MIT community convened at the Student Center on Friday, the final day of IAP, to learn how to better mind their P's and Q's. Thirty-four classes were offered under such provocative titles as "Getting your own sweet way" and "How to accessorize!"

About 300 diplomas were awarded in Lobdell Court during commencement ceremonies , which were preceded by a fashion show.

Tips gleaned from the curriculum include: