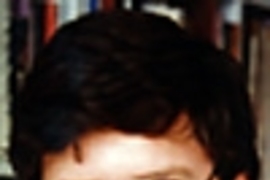 Scott Ritter, a former chief of the United Nations inspection team (UNSCOM), urged an enthusiastic MIT audience to keep both the United Nations charter and the U.S. Constitution in mind, as he does, when considering military action against Iraq.

Describing himself as a "simple marine," and a "beat cop enforcing the law," Ritter summarized results from more than 50 trips made to Iraq for the purpose of locating and destroying weapons of mass destruction between 1991 and 1998.

Ritter's Sept. 26 talk, "Cause for War? Assessing the Bush Administration's Case Against Iraq," was sponsored by the Technology and Culture Forum at MIT and the Episcopal Diocese.

Ritter has gained international notice for his vigorous stance against the Bush administration's demonization of Saddam Hussein and its eagerness to invade Iraq as a feature of the war on terror.

He resigned from the U.N. inspection team in 1998 in protest over U.S. policies that he felt subverted the weapons inspection process. Since then he has written and published a book, "Endgame: Solving the Iraq Problem Once and For All," and a documentary about Iraq.

Speaking of his experiences in Iraq, Ritter said, "determination, intelligence, science and good police work" had paid off. But not as he had hoped.

"Our mission revolved around disarmament, around economic sanctions and their link with compliance by the Iraqis. We were there because the U.N. passed a law to send us," said Ritter.

He outlined particular areas of concern. "Be concerned," he said, about biological and chemical weapons re-buildup as well as the possibility of Iraq's obtaining a non-fissile core for a nuclear device.

But the U.S. government, he said, misused the U.N. inspections, obstructs further inspections and now fixates on regime change. "Iraq must have internal changes. It needs a middle class. Provide the Iraqis with reasons to collaborate. If we shut the door on inspections and say we're coming after them with everything we have, the situation becomes a self-fulfilling prophecy."

Noting that "regime change" - that is, one nation picking the leadership of a sovereign state - was outside the U.N. charter and outside the U.S. Constitution, Ritter declared, "We are a nation of laws. We can't sit by when the government operates outside the framework of the law."

Ritter challenged the students especially to look beyond desire and concentrate on will. "Start challenging yourselves. What must you do when you get out of this room tonight to change this situation?" he asked, to resounding applause.

A second talk by Stephen Walt, a professor of international affairs at Harvard University, was followed by general discussion.

The two speakers were introduced by Amy McCreath, Episcopal chaplain at MIT and coordinator of the Technology and Culture Forum. Kenneth Oye, associate professor of political science at MIT, served as moderator.