Living the history of Cairo 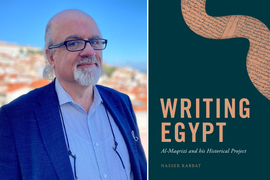 A bit of turbulence in the job market can affect people in different ways. Consider the Egyptian scholar Taqiyy al-Din Ahmad ibn 'Ali al-Maqrizi (1364-1442). In the early 1400s, after about a quarter-century of frustration in seeking short-lived administrative jobs and wealthy patrons in Cairo, al-Maqrizi became fed up for good. He retreated to his house, started writing, and more or less did not stop for 30 years.

What resulted is the most expansive corpus of historical writing of its time, over 30 distinct works, including several histories of Egypt, biographical dictionaries, works of religious scholarship, and his “Khitat,” an architectural and political history of Cairo. Al-Maqrizi is Egypt’s best-known historian and a primary source unlike any other for medieval Egypt. That includes Mamluk Egypt, an imperial period starting in 1250, though his work covers the time since 640, when the city known today as Cairo was founded by the conquering Arabs.

Al-Maqrizi was also a critic of the world around him — and not just because his own administrative career foundered, or because a key patron was executed around 1412, at which point he became a full-time historian. Al-Maqrizi felt he was witnessing a larger period of imperial decline, which colored his work.

“His critique of the rule of Egypt left al-Maqrizi to fear for the future of the country, so he devoted the last 30 years of his life to writing the history of Egypt,” says MIT Professor Nasser Rabbat, author of a new biography of al-Maqrizi.

In the book, “Writing Egypt: Al-Maqrizi and His Historical Project,” just published by Edinburgh University Press, Rabbat examines al-Maqrizi’s personal life, scholarship, and politics, characterizing him as an intellectual with a strong moral sensibility.

“No one, really no one at the time, dared be as critical as al-Maqrizi,” says Rabbat, who is the Aga Khan Professor and the director of the Aga Khan Program for Islamic Architecture in MIT’s School of Architecture and Planning. “This is not only a chronicler reporting to us the information of the time, which is what most historians of the medieval Islamic period would do. This is someone who had the mission to show us what the ruling class [was] doing to ruin the economy and the urbanism of the country — their venality, their corruption, their bad politics.”

When your mentor is Ibn Khaldun

Rabbat, an architect and architectural historian, first encountered the work of al-Maqrizi as a graduate student a few decades ago, when he realized the “Khitat” was a work of incomparable detail about Cairo’s past, including its buildings. Over time, Rabbat also began to understand that al-Maqrizi had dissident impulses evident in many of his works.

“I’m attracted to him as a rebel,” says Rabbat, a public proponent of the Arab Spring movement of 2011 and beyond. And there are additional idiosyncracies in al-Maqrizi’s work; he was, Rabbat writes in the book, “one of only a few scholars of his time to express in writing distinct tender feelings toward the women in his life, most especially his mother.”

Al-Maqrizi came from a well-off scholarly family. In Cairo he knew and studied with the Tunisian-born scholar Ibn Khaldun, the most renowned Arab intellectual of the entire Middle Ages, whose work encompasses what we now regard as history, sociology, and economics. Among other things, Ibn Khaldun interpreted the history of empires and kingdoms as a series of rise-and-fall episodes. In Rabbat’s interpretation, al-Maqrizi’s work bears the influence of Ibn Khaldun.

In the “Khitat,” for instance, al-Maqrizi regards Cairo as having gone through five distinct periods of history since 640, and interprets the physical environment around him as being tied to these epochs.

“Ibn Khaldun told him that civilization goes through cycles, it rises and falls, and rises again and falls,” Rabbat says. “I think al-Maqrizi arranged the ‘Khitat’ according to that.” He continues: “Al-Maqrizi theorizes ‘kharab,’ the Arabic word for ‘ruin,’ so instead of writing about the fall of the dynasty or the disintegration of the political order, his frame of reference is the ‘ruination of the city,’ standing for the ruination of the political system. What he’s seeing as the rise and fall or the fate of the dynasty is instilled in the rise and fall of the city. This I think he learned from Ibn Khaldun.”

The “Khitat” largely reflects its author’s encyclopediac knowledge of, and intense feelings for, his home city. In the book, Rabbat calls him “a pioneer in the study of urban history,” whose texts predated many European works in this area.

“It’s a book that’s really aimed at telling you, this is the story of this city, and it’s also the story of its buildings, its waterworks, its streets, the whole thing is bringing all of that together to give us an idea of the city that he loves,” Rabbat says. “And he’s lamenting its disintegration.”

To be sure, Al-Maqrizi wrote volume after volume about Egyptian history generally, not just about Cairo — as well as his biographical dictionaries and a series of works about the Prophet Mohammed. He was a pious person who made five pilgrimmages to Mecca after age 50, which would have meant weeks riding camels on each trip.

Still, across his works, Rabbat finds many signs of al-Maqrizi’s disenchantment with the political order, such as his description of one medieval Egyptian dissident as a “saint.”

“He is not a fighting man,” Rabbat says. “But he’s saying, we need rebels to remove the corrupt Mamluk rulers. Writing was one way for al-Maqziri to express not just his disenchantment, but his political critique.”

That interpretation of Egyptian history was both personal and political, mixing thwarted ambitions and an intellectual’s understanding of history’s ebbs and flows.

“It had something to do with his disappointment and his broken pride,” Rabbat says. “Because he thought of himself as a great person, and he did not receive the kind of respect from the ruling class that he was expecting.”

Over time, al-Maqrizi’s work was translated into Turkish, and by the 19th century Europeans had started reading him. More recently, as Rabbat chronicles, al-Maqrizi has become a touchstone figure for poets and writers. Al-Maqrizi deeply influenced the acclaimed writer Gamal al-Ghitani, whose 1980 novel “Khitat al-Ghitani” is partly an homage to the original “Khitat.” Al-Maqrizi is even a character in the 2016 novel “The Time-Travels of the Man who Sold Pickles and Sweet,” by Khayri Shalabi.

“The [contemporary] Egyptians also discovered in him a proto-citizen, someone who is concerned about the country,” Rabbat says. “What caught my attention is how novelists and poets use al-Maqrizi — as an alter ego, a doppelganger.”

“Writing Egypt” has been well received by other scholars. Walid Saleh, a professor in the University of Toronto’s Department for the Study of Religion, has called the book a “masterpiece,” and “one of the best assessments of an Arab intellectual to appear this decade.” Li Guo, a professor in the Arabic Studies Program at the University of Notre Dame, has written that the book’s “carefully charted trajectory of al-Maqrizi’s monumental project and its impact on Ottoman historiography, Orientalism, and modern Egyptian historical writing is informative and inspirational.”

To study al-Maqrizi is not to be hagiographic about him; scholars have found that al-Maqrizi lifted passages from other writers, as Rabbat also details in the book. Overall, though, Rabbat says he wants to place more attention on the distinctive aspects of al-Maqrizi: his moral bearings, and willingness to write frankly in troubled times.

“This is what al-Maqrizi means to us today,” Rabbat says. “I am hoping this book will make people discover him as something other than merely the primary source that everyone uses for this period of Egypt.”

The cap will help researchers gain new insight into how the brain functions.