The excitement of making discoveries on the global stage is “so much bigger than the pressure,” says the particle physicist.
Jennifer Chu | MIT News Office
Publication Date:
Press Inquiries 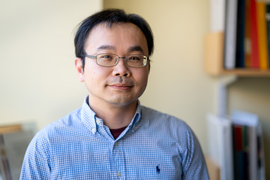 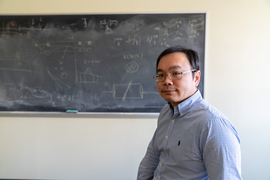 ↓ Download Image
Caption: “Every time we collect a small piece of information, we understand a little bit more about the early universe,” Lee says. “That makes me want to know even more.”
Credits: Photo: Bryce Vickmark

Caption:
“Every time we collect a small piece of information, we understand a little bit more about the early universe,” Lee says. “That makes me want to know even more.”
Credits:
Photo: Bryce Vickmark

When Yen-Jie Lee came to MIT as a graduate student in 2006, it was a bit of a culture shock. The aspiring particle physicist had studied physics at National Taiwan University before his career took a hiatus in the forested mountains of Taiwan. There, he worked as a marine corps lieutenant to fulfill the nation’s required military service. He still remembers the deafening crackle of artillery drills and the unyielding pressure of daily military life.

“That experience made me into a person who is much less affected by pressure,” Lee recalls. “But after two years living in a forest of monkeys, my English was quite bad, and I felt like I had forgotten all of the physics I learned.”

Nevertheless, toward the end of his service, Lee applied to PhD programs, including several in the United States. When he visited MIT, he felt an immediate kinship with physics professor Wit Busza.

“Even though he couldn’t understand me because of my accent, we thought we were each wonderful people, and at the end of the day I decided to give myself a try,” Lee says. “Coming to MIT changed my life completely.”

As a graduate student in Busza’s group, Lee had a career-shaping opportunity to go to Geneva during a pivotal moment in particle physics. There, scientists were preparing to turn on the Large Hadron Collider, the largest, most powerful particle accelerator in the world. The collisions of particles produced by the LHC were anticipated to produce conditions similar to the early universe, and possibly entirely new, unpredictable phenomena.

Lee found himself at the core of the analysis team, where he quickly learned to communicate with other scientists, in the language of English and the equations of physics. He ultimately helped to measure and interpret some of the LHC’s first collisions — highly anticipated analyses that Lee, who credits his military training for helping him stay focused, took to readily.

“There were several thousand collaborators, everyone was interested in this physics, and I was one of the first to get to understand the data,” Lee says. “For me, the excitement of these first measurements was so much bigger than the pressure.”

Since those early days, Lee has continued searching for clues to the universe’s beginnings, using data from the LHC. At MIT, where he is now a tenured associate professor of physics, he is looking for patterns and interactions in the extreme aftermath of particle collisions that might tell us something about how the universe came into existence. These experiments might also reveal the inner workings of other extreme environments, such as neutron stars.

“Every time we collect a small piece of information, we understand a little bit more about the early universe,” he says. “That makes me want to know even more.”

“The law of nature”

Lee was born in Taichung City, an industrial municipality in west-central Taiwan. Growing up, he remembers being drawn to math and physics, though in high school he rarely attended class. A busy schedule of science competitions often kept him out of school, as he was chosen regularly to represent his high school in national science fairs and problem-solving contests in math, physics, chemistry, and computation.

“It was like an education for me,” he says.

After competing across multiple subjects, Lee realized that he was most interested in one: physics. When he enrolled in National University of Taiwan as an undergraduate, he spent his first year taking on a range of physics internships, including working in an optics lab, assisting in a study of superconductors, and camping out in an observatory to track the stars. It was an internship in experimental particle physics that set his academic career in motion.

Lee worked as an intern on the Belle experiment, a particle physics experiment that ran out of the KEKB particle accelerator in Tsukuba, Japan. The accelerator was designed to collide electrons with positrons — the antimatter counterparts to electrons. As they collided, electrons and positrons annihilated in a shower of subparticles. Scientists including Lee looked for signs of exotic particles and tracked the decay of rare particles in the annihilation’s aftermath.

“I had a lot of fun with this very simple system,” says Lee, who based his undergraduate and master’s theses on Belle experiment data. “It made me want to learn the law of nature, and whether we can find new physics and new phenomena involving particle detection.”

After completing his military service in Taiwan, Lee came to MIT and joined his advisor Busza on work at the LHC, where the accelerator was preparing to collide heavy ions to produce a mix of particles far more complicated and exotic than collisions between electrons and positrons.

“Heavy-ion collisions create an environment that’s around 5 trillion degrees, and we can watch as this system cools down,” Lee says. “It’s basically the same path of the early universe, 10 microseconds after the Big Bang.”

Lee was keen to probe the fallout of heavy-ion collisions, though at the time initial experiments involved less complicated collisions between protons. As it happens, Lee was positioned in the research team to write the first physics paper reporting the results from these initial proton-proton experiments.

The LHC began running its first heavy-ion experiments toward the end of Lee’s PhD, and he was able to analyze some of the first data from these much-anticipated runs. Through those analyses, he discovered fast-moving quarks produced in the collisions, that streaked through the resulting plasma in jets.

“It’s like watching a bullet shot through water,” Lee says. “We can see the wake trailing the bullet, and can use that to learn about water’s sound propagation. It’s the same with these jets, where we can use quarks to learn about the sound of the early universe.”

In 2013, Lee accepted an offer to join MIT’s physics faculty as a member of the Relativistic Heavy Ion Group, where he has continued to lead analyses of heavy-ion data from the LHC, and is developing new techniques to look for exotic particles and new, unpredictable phenomena.

“At MIT, the pressure is very high, and there are moments of excitement and moments when you feel you are doing not as well as you hoped,” Lee says. “But colleagues in our group, Gunther Roland and Bolek Wyslouch, have constructed a very supportive environment. I am very grateful for this.”

Something he is also thankful for has been the chance to see the world through his career in physics. He has given talks and attended conferences in more than 30 countries, and has taken extended stays in many, to experience new perspectives.

“When visiting other countries, I would try to stay for one or two months, to learn how different people live their daily life,” Lee says. “Before, I didn’t think I would go out of Taiwan. I’ve been so lucky to experience so many differences.”