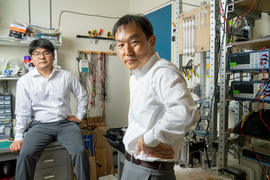 ↓ Download Image
Caption: MIT researchers have created a portable desalination unit that can automatically remove particles and salts simultaneously to generate drinking water. “This is really the culmination of a 10-year journey that I and my group have been on,” says senior author Jongyoon Han, right, pictured with Junghyo Yoon, seated.
Credits: Photo: M. Scott Brauer 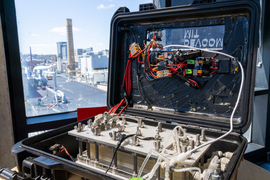 ↓ Download Image
Caption: The user-friendly unit, which weighs less than 10 kilograms and does not require the use of filters, can be powered by a small, portable solar panel.
Credits: Photo: M. Scott Brauer 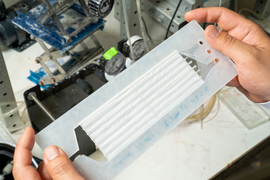 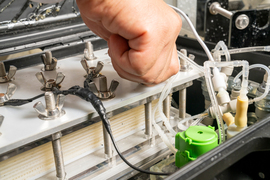 Caption:
MIT researchers have created a portable desalination unit that can automatically remove particles and salts simultaneously to generate drinking water. “This is really the culmination of a 10-year journey that I and my group have been on,” says senior author Jongyoon Han, right, pictured with Junghyo Yoon, seated.
Credits:
Photo: M. Scott Brauer

Caption:
The user-friendly unit, which weighs less than 10 kilograms and does not require the use of filters, can be powered by a small, portable solar panel.
Credits:
Photo: M. Scott Brauer

Caption:
The setup includes a two-stage ion concentration polarization (ICP) process, with water flowing through six modules in the first stage then through three in the second stage, followed by a single electrodialysis process.
Credits:
Photo: M. Scott Brauer

MIT researchers have developed a portable desalination unit, weighing less than 10 kilograms, that can remove particles and salts to generate drinking water.

The suitcase-sized device, which requires less power to operate than a cell phone charger, can also be driven by a small, portable solar panel, which can be purchased online for around $50. It automatically generates drinking water that exceeds World Health Organization quality standards. The technology is packaged into a user-friendly device that runs with the push of one button.

Unlike other portable desalination units that require water to pass through filters, this device utilizes electrical power to remove particles from drinking water. Eliminating the need for replacement filters greatly reduces the long-term maintenance requirements.

This could enable the unit to be deployed in remote and severely resource-limited areas, such as communities on small islands or aboard seafaring cargo ships. It could also be used to aid refugees fleeing natural disasters or by soldiers carrying out long-term military operations.

“This is really the culmination of a 10-year journey that I and my group have been on. We worked for years on the physics behind individual desalination processes, but pushing all those advances into a box, building a system, and demonstrating it in the ocean, that was a really meaningful and rewarding experience for me,” says senior author Jongyoon Han, a professor of electrical engineering and computer science and of biological engineering, and a member of the Research Laboratory of Electronics (RLE).

Joining Han on the paper are first author Junghyo Yoon, a research scientist in RLE; Hyukjin J. Kwon, a former postdoc; SungKu Kang, a postdoc at Northeastern University; and Eric Brack of the U.S. Army Combat Capabilities Development Command (DEVCOM). The research has been published online in Environmental Science and Technology. 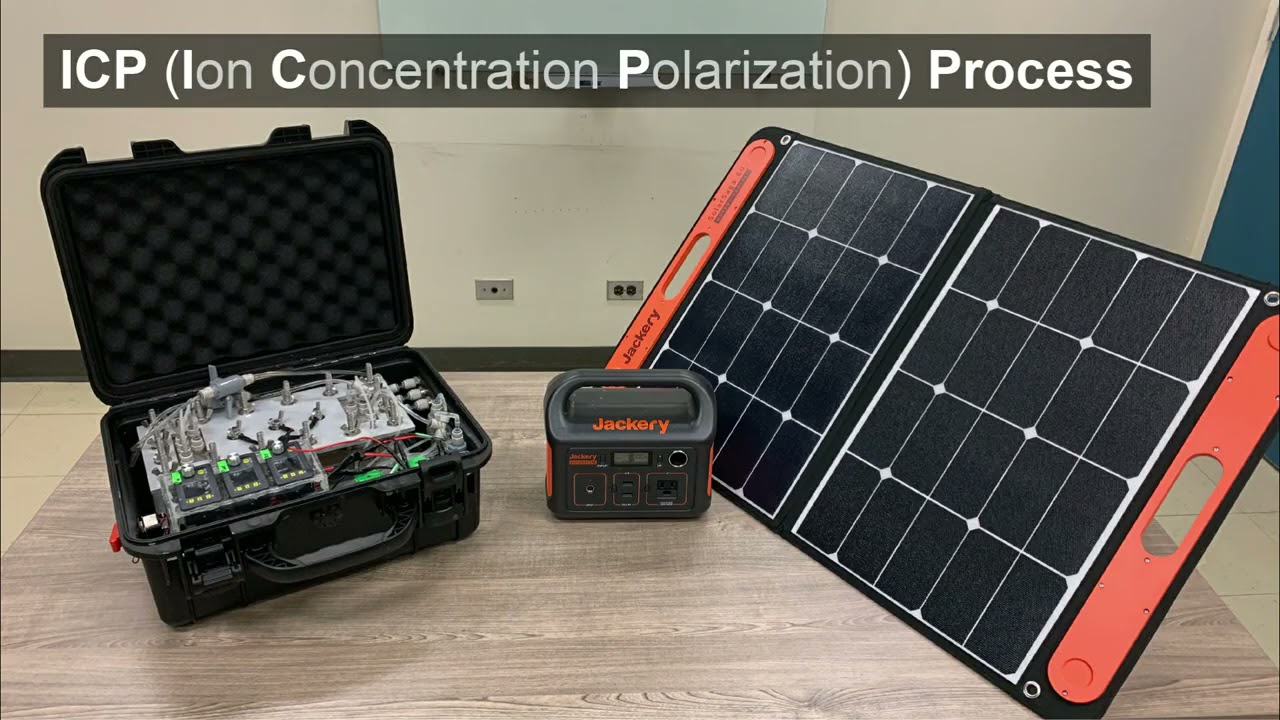 Commercially available portable desalination units typically require high-pressure pumps to push water through filters, which are very difficult to miniaturize without compromising the energy-efficiency of the device, explains Yoon.

Instead, their unit relies on a technique called ion concentration polarization (ICP), which was pioneered by Han’s group more than 10 years ago. Rather than filtering water, the ICP process applies an electrical field to membranes placed above and below a channel of water. The membranes repel positively or negatively charged particles — including salt molecules, bacteria, and viruses — as they flow past. The charged particles are funneled into a second stream of water that is eventually discharged.

The process removes both dissolved and suspended solids, allowing clean water to pass through the channel. Since it only requires a low-pressure pump, ICP uses less energy than other techniques.

But ICP does not always remove all the salts floating in the middle of the channel. So the researchers incorporated a second process, known as electrodialysis, to remove remaining salt ions.

Yoon and Kang used machine learning to find the ideal combination of ICP and electrodialysis modules. The optimal setup includes a two-stage ICP process, with water flowing through six modules in the first stage then through three in the second stage, followed by a single electrodialysis process. This minimized energy usage while ensuring the process remains self-cleaning.

They shrunk and stacked the ICP and electrodialysis modules to improve their energy efficiency and enable them to fit inside a portable device. The researchers designed the device for nonexperts, with just one button to launch the automatic desalination and purification process. Once the salinity level and the number of particles decrease to specific thresholds, the device notifies the user that the water is drinkable.

The researchers also created a smartphone app that can control the unit wirelessly and report real-time data on power consumption and water salinity.

Yoon and Kwon set the box near the shore and tossed the feed tube into the water. In about half an hour, the device had filled a plastic drinking cup with clear, drinkable water.

“It was successful even in its first run, which was quite exciting and surprising. But I think the main reason we were successful is the accumulation of all these little advances that we made along the way,” Han says.

The resulting water exceeded World Health Organization quality guidelines, and the unit reduced the amount of suspended solids by at least a factor of 10. Their prototype generates drinking water at a rate of 0.3 liters per hour, and requires only 20 watt-hours per liter.

“Right now, we are pushing our research to scale up that production rate,” Yoon says.

One of the biggest challenges of designing the portable system was engineering an intuitive device that could be used by anyone, Han says.

Yoon hopes to make the device more user-friendly and improve its energy efficiency and production rate through a startup he plans to launch to commercialize the technology.

In the lab, Han wants to apply the lessons he’s learned over the past decade to water-quality issues that go beyond desalination, such as rapidly detecting contaminants in drinking water.

“This is definitely an exciting project, and I am proud of the progress we have made so far, but there is still a lot of work to do,” he says.

For example, while “development of portable systems using electro-membrane processes is an original and exciting direction in off-grid, small-scale desalination,” the effects of fouling, especially if the water has high turbidity, could significantly increase maintenance requirements and energy costs, notes Nidal Hilal, professor of engineering and director of the New York University Abu Dhabi Water research center, who was not involved with this research.

“Another limitation is the use of expensive materials,” he adds. “It would be interesting to see similar systems with low-cost materials in place.”

The research was funded, in part, by the DEVCOM Soldier Center, the Abdul Latif Jameel Water and Food Systems Lab (J-WAFS), the Experimental AI Postdoc Fellowship Program of Northeastern University, and the Roux AI Institute.

MIT researchers have “developed a free-floating desalination unit consisting of a multilayer evaporator that recycles the heat generated when the water vapor condenses, boosting its overall efficiency,” reports Nell Lewis for CNN. “Researchers suggested it could be configured as a floating panel on the sea, delivering freshwater through pipes to the shore, or it could be designed to serve a single household, using it atop a tank of seawater,” writes Lewis.

MIT researchers developed a suitcase-sized, portable desalination device that can turn salt water into drinking water with the push of a button, reports Elissaveta M. Brandon for Fast Company. Brandon writes that the device could be a “vital tool for remote island communities, seafaring cargo ships, and even refugee camps located near water.”

Motherboard reporter Audrey Carleton writes that MIT researchers have developed a “filter-less portable desalination device that uses an electrical field generated by solar energy to repel charged particles like salt, bacteria, and viruses.” Research Scientist Junghyo Yoon explains that: “All indicators tell us that water scarcity is a growing problem for everyone due to rising sea levels. We don’t hope for a grim future, but we want to help people be prepared for it.”

A new portable, solar-powered desalination device developed by MIT researchers can create potable drinking water with the push of a button, reports Tony Ho Tran for The Daily Beast. “The device doesn’t rely on any filters like traditional desalination machines,” writes Tran. “Instead, it zaps the water with electric currents to remove minerals such as salt particles from the water.”