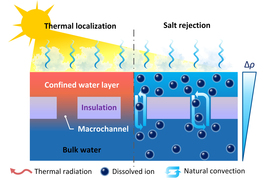 ↓ Download Image
Caption: MIT researchers have developed a solar-powered desalination system that is more efficient and less expensive than previous methods. In this schematic, a confined water layer above the floating thermal insulation enables the simultaneous thermal localization and salt rejection.
Credits: Image: Courtesy of the researchers 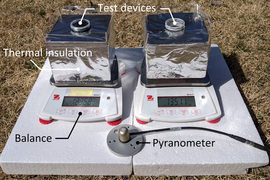 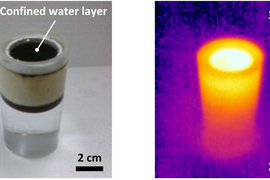 Caption:
MIT researchers have developed a solar-powered desalination system that is more efficient and less expensive than previous methods. In this schematic, a confined water layer above the floating thermal insulation enables the simultaneous thermal localization and salt rejection.
Credits:
Image: Courtesy of the researchers

Caption:
Researchers test two identical outdoor experimental setups placed next to each other.
Credits:
Image: Courtesy of the researchers

An estimated two-thirds of humanity is affected by shortages of water, and many such areas in the developing world also face a lack of dependable electricity. Widespread research efforts have thus focused on ways to desalinate seawater or brackish water using just solar heat. Many such efforts have run into problems with fouling of equipment caused by salt buildup, however, which often adds complexity and expense.

Now, a team of researchers at MIT and in China has come up with a solution to the problem of salt accumulation — and in the process developed a desalination system that is both more efficient and less expensive than previous solar desalination methods. The process could also be used to treat contaminated wastewater or to generate steam for sterilizing medical instruments, all without requiring any power source other than sunlight itself.

The findings are described today in the journal Nature Communications, in a paper by MIT graduate student Lenan Zhang, postdoc Xiangyu Li, professor of mechanical engineering Evelyn Wang, and four others.

“There have been a lot of demonstrations of really high-performing, salt-rejecting, solar-based evaporation designs of various devices,” Wang says. “The challenge has been the salt fouling issue, that people haven’t really addressed. So, we see these very attractive performance numbers, but they’re often limited because of longevity. Over time, things will foul.”

Many attempts at solar desalination systems rely on some kind of wick to draw the saline water through the device, but these wicks are vulnerable to salt accumulation and relatively difficult to clean. The team focused on developing a wick-free system instead. The result is a layered system, with dark material at the top to absorb the sun’s heat, then a thin layer of water above a perforated layer of material, sitting atop a deep reservoir of the salty water such as a tank or a pond. After careful calculations and experiments, the researchers determined the optimal size for the holes drilled through the perforated material, which in their tests was made of polyurethane. At 2.5 millimeters across, these holes can be easily made using commonly available waterjets.

The holes are large enough to allow for a natural convective circulation between the warmer upper layer of water and the colder reservoir below. That circulation naturally draws the salt from the thin layer above down into the much larger body of water below, where it becomes well-diluted and no longer a problem. “It allows us to achieve high performance and yet also prevent this salt accumulation,” says Wang, who is the Ford Professor of Engineering and head of the Department of Mechanical Engineering.

Li says that the advantages of this system are “both the high performance and the reliable operation, especially under extreme conditions, where we can actually work with near-saturation saline water. And that means it’s also very useful for wastewater treatment.”

He adds that much work on such solar-powered desalination has focused on novel materials. “But in our case, we use really low-cost, almost household materials.” The key was analyzing and understanding the convective flow that drives this entirely passive system, he says. “People say you always need new materials, expensive ones, or complicated structures or wicking structures to do that. And this is, I believe, the first one that does this without wicking structures.”

This new approach “provides a promising and efficient path for desalination of high salinity solutions, and could be a game changer in solar water desalination,” says Hadi Ghasemi, a professor of chemical and biomolecular engineering at the University of Houston, who was not associated with this work. “Further work is required for assessment of this concept in large settings and in long runs,” he adds.

Just as hot air rises and cold air falls, Zhang explains, natural convection drives the desalination process in this device. In the confined water layer near the top, “the evaporation happens at the very top interface. Because of the salt, the density of water at the very top interface is higher, and the bottom water has lower density. So, this is an original driving force for this natural convection because the higher density at the top drives the salty liquid to go down.” The water evaporated from the top of the system can then be collected on a condensing surface, providing pure fresh water.

The rejection of salt to the water below could also cause heat to be lost in the process, so preventing that required careful engineering, including making the perforated layer out of highly insulating material to keep the heat concentrated above. The solar heating at the top is accomplished through a simple layer of black paint.

So far, the team has proven the concept using small benchtop devices, so the next step will be starting to scale up to devices that could have practical applications. Based on their calculations, a system with just 1 square meter (about a square yard) of collecting area should be sufficient to provide a family’s daily needs for drinking water, they say. Zhang says they calculated that the necessary materials for a 1-square-meter device would cost only about $4.

Their test apparatus operated for a week with no signs of any salt accumulation, Li says. And the device is remarkably stable. “Even if we apply some extreme perturbation, like waves on the seawater or the lake,” where such a device could be installed as a floating platform, “it can return to its original equilibrium position very fast,” he says.

The necessary work to translate this lab-scale proof of concept into workable commercial devices, and to improve the overall water production rate, should be possible within a few years, Zhang says. The first applications are likely to be providing safe water in remote off-grid locations, or for disaster relief after hurricanes, earthquakes, or other disruptions of normal water supplies.

Zhang adds that “if we can concentrate the sunlight a little bit, we could use this passive device to generate high-temperature steam to do medical sterilization” for off-grid rural areas.

“I think a real opportunity is the developing world,” Wang says. “I think that is where there's most probable impact near-term, because of the simplicity of the design.” But, she adds, “if we really want to get it out there, we also need to work with the end users, to really be able to adopt the way we design it so that they’re willing to use it.”

“This is a new strategy toward solving the salt accumulation problem in solar evaporation,” says Peng Wang, a professor at King Abdullah University of Science and Technology in Saudi Arabia, who was not associated with this research. “This elegant design will inspire new innovations in the design of advanced solar evaporators. The strategy is very promising due to its high energy efficiency, operation durability, and low cost, which contributes to low-cost and passive water desalination to produce fresh water from various source water with high salinity, e.g., seawater, brine, or brackish groundwater.”

MIT researchers have developed a solar-powered desalination system that “avoids salt buildup and could provide a family with continuous drinking water for only $4,” reports Miriam Fauzia for The Daily Beast. “The researchers hope to develop their device into something that can be mass produced and used by individuals and families, especially for those living in remote communities,” writes Fauzia.