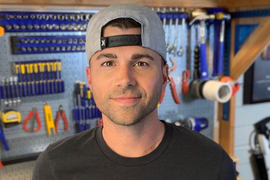 Mark Rober, a NASA engineer-turned-internet celebrity whose hugely popular videos celebrate problem-solving, determination, and having fun while learning, will deliver the address at the OneMIT Commencement Ceremony on Thursday, June 1.

Also an entrepreneur and educator, Rober is best-known for his successful YouTube channel, which hosts videos with title such as “Egg Drop From Space” and “Can You Swim in Jell-O?” While the topics are light-hearted, each video explores some aspect of science or engineering. The approach has found success; the channel has 23 million subscribers and more than 3 billion views.

Rober is the founder of CrunchLabs, which creates educational toy-making kits aimed at encouraging kids to think like engineers; he also teaches a variety of online classes on science and engineering topics. Recently, Rober teamed up with another YouTuber, Jimmy Donaldson, also known as MrBeast, leveraging their popular platforms to combat climate change.

“The greatest teachers bring a subject to life in an irresistible way,” says MIT President L. Rafael Reif. “For millions of young learners (and a few older ones, too), Mark Rober is making science and engineering inspiring, engaging, accessible, and most importantly, fun. His videos and build-box kits brim with creativity and energy — hands-on learning at its finest. We are delighted to welcome Mark to campus for this spring’s ceremony. And we are so grateful that he has at last settled a question that has troubled scientists and first graders for years: What would it look like to bellyflop on Jell-O?”

“My passion is getting people, especially young people, stoked about science, education, and engineering,” says Rober. “I’m also such a believer in hands-on, practical engineering solutions to real-world problems, and I can’t think of a school that has a better reputation for that than MIT. I’m excited to come out and meet the Class of 2023 and celebrate all the amazing, positive change they’re going to bring to the world.”

After studying mechanical engineering at Brigham Young University and the University of Southern California, Rober spent nine years as a mechanical engineer at NASA’s Jet Propulsion Laboratory. That included seven years on the Mars Curiosity rover team, working on the jet pack that lowered the rover to the surface and on other hardware used for collecting dirt samples.

Rober then moved to Silicon Valley and worked for five years on product design in Apple’s Special Projects group. In 2011, his iPad-based Halloween costume inadvertently helped launch his YouTube channel.

“Mark’s technical expertise, along with his extraordinary talent for communication, has enabled him to showcase the practical power of science and engineering,” says James Poterba, the Mitsui Professor of Economics and the chair of the Commencement Committee. “His capacity to make complex concepts not just relevant, but fun, has played an important part in advancing both public understanding of science and STEM education.”

“I love taking science and engineering to make it interesting enough so that kids want to click on it and it becomes aspirational,” Rober said in a recent interview with CNBC. “I try to hide the vegetables with getting the science and engineering message out there.” He does this, in part, through making compelling engineering builds, such as the world’s largest Nerf gun or an obstacle course in his backyard to protect his bird feeder from squirrels.

In 2019, Rober and Donaldson launched Team Trees, an initiative with the goal of planting 20 million trees. They followed this with Team Seas, which aims to remove 30 million pounds of plastics from oceans, rivers, and beaches. Both efforts quickly achieved their goals, with participation from numerous volunteers, demonstrating the power of social media to engage people in environmental causes.

“I am so excited to have Mark Rober speak at commencement. As an ex-NASA rocket scientist turned YouTuber, he inspires our youth to engage with science through objectively delightful videos and introduces a world of magic that one can understand through science and technology,” says Anna Sun, president of MIT’s Class of 2023. “Accurately described as the ‘Willy Wonka of engineering,’ Rober has an acumen for innovation and serves as an inspiration for redefining how we students can use our knowledge to impact those around us. I can’t wait to learn more from his experiences.”

“Bringing individuals from all walks of life into an educational environment is a feature of MIT, and Mark Rober captures this MIT quality through outreach videos that spark imagination and innovation in the minds of learners across the globe,” says David Spicer, president of the Undergraduate Association. “Science and engineering are not static. Education is not stagnant. Rober is a fresh example of the importance of bringing the new generation of learners into STEM education through pioneering methods.”

“Mark Rober is a great exemplar of the quirky, creative energy for engineering we so highly and uniquely value at MIT, and I can’t wait to hear him speak at Commencement,” says AJ Miller, president of the Graduate Student Council. “I love how he makes building and communicating science fun and accessible to everyone and inspires so many young people to pursue education and careers in technology.”

“Zoom out”: Kealoha Wong ’99 calls on MIT graduates to consider their lives within the enormity of the universe