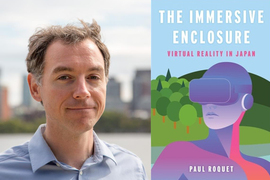 What is virtual reality? On a technical level, it is a headset-enabled system using images and sounds to make the user feel as if they are in another place altogether. But in terms of the content and essence of virtual reality — well, that may depend on where you are.

In the U.S., for instance, virtual reality (VR) has its deep roots as a form of military training technology. Later it took on a “techno-utopian” air when it started getting more attention in the 1980s and 1990s, as MIT Professor Paul Roquet observes in a new book about the subject. But in Japan, virtual reality has become heavily oriented around “isekai,” or “other world” fantasies, including scenarios where the VR user enters a portal to another world and must find their way back.

“Part of my goal, in pulling out these different senses of virtual reality, is that it can mean different things in different parts of the world, and is changing a lot over time,” says Roquet, an associate professor of media studies and Japan studies in MIT’s Comparative Media Studies/Writing program.

As such, VR constitutes a useful case study in the interactions of society and technology, and the way innovations can evolve in relation to the cultures that adopt them. Roquet details these differences in the new book, “The Immersive Enclosure: Virtual reality in Japan,” published this week by Columbia University Press.

As Roquet notes in the book, virtual reality has a lengthy lineage of precursor innovations, dating at least to early 20th-century military flight simulators. A 1960s stereoscopic arcade machine, the Sensorama, is regarded as the first commercial VR device. Later in the decade, Ivan Sutherland, a computer scientist with an MIT PhD, developed a pioneering computerized head-mounted display.

By the 1980s in the U.S., however, virtual reality, often linked with technologist Jaron Lanier, had veered off in a different direction, being cast as a liberatory tool, “more pure than what came before,” as Roquet puts it. He adds: “It goes back to the Platonic ideal of the world that can be separated from everyday materiality. And in the popular imagination, VR becomes this space where we can fix things like sexism, racism, discrimination, and inequality. There’s a lot of promises being made in the U.S. context.”

In Japan, though, VR has a different trajectory. Partly because Japan’s postwar constitution prohibited most military activities, virtual reality developed more in relation to forms of popular entertainment such as manga, anime, and video games. Roquet believes its Japanese technological lineage also includes the Sony Walkman, which created private space for media consumption.

“It’s going in different directions,” Roquet says. “The technology moves away from the kind of military and industrial uses promised in the U.S.”

As Roquet details in the book, different Japanese phrases for virtual reality reflect this. One term, “bacharu riariti,” reflects the more idealistic notion that a virtual space could functionally substitute for a real one; another, “kaso genjitsu,” situates virtual reality more as entertainment where the “feeling matters as much as technology itself.”

The actual content of VR entertainment can vary, from multiplayer battle games to other kinds of fantasy-world activities. As Roquet examines in the book, Japanese virtual reality also has a distinct gender profile: One survey in Japan showed that 87 percent of social virtual reality users were male, but 88 percent of them were embodying female lead characters, and not necessarily in scenarios that are empowering to women. Men are thus “everywhere in control yet nowhere to be seen,” Roquet writes, while “covertly reinscribing gender norms.”

A rather different potential application for virtual reality is telework. As Roquet also details, considerable research has been applied to the idea of using VR to control robots for use in numerous settings, from health care to industrial tasks. This is something Japanese technologists share with, say, Mark Zuckerberg of Meta, whose company has become the leading U.S. backer of virtual reality.

“It’s not so much that there’s an absolute divide [between the U.S. and Japan], Roquet says; instead, he notes, there is a different emphasis in terms of “what virtual reality is about.”

Other scholars have praised “The Immersive Enclosure.” Yuriko Furuhata, an associate professor at McGill University, has called the book “a refreshing new take on VR  as a consumer technology.” James J. Hodge, an associate professor at Northwestern University, has called the book “a must-read for scholars in media studies and general readers alike fascinated by the flawed revolutionary potential of VR.”

Ultimately, as Roquet concludes as the end of the book, virtual reality still faces key political, commercial, and social questions. One of them, he writes, is “how to envision a VR future governed by something other than a small set of corporate landlords and the same old geopolitical struggles.” Another, as the book notes, is “what it means for a media interface to assert control over someone’s spatial awareness.”

In both matters, that means understanding virtual reality — and technology broadly — as it gets shaped by society. Virtual reality may often present itself as a form of escapism, but there is no escaping the circumstances in which it has been developed and refined.

“You can create a space that’s outside of the social world, but it ends up being highly shaped by whoever is doing the creation,” Roquet says.