Collaboration with Federal Reserve Bank of Boston yields progress in understanding how a digital currency might be developed in the future.
Peter Dizikes | MIT News Office
Publication Date:
Press Inquiries 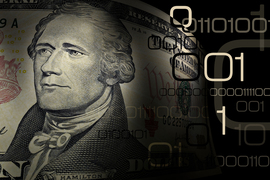 ↓ Download Image
Caption: In collaboration with a team at the Federal Reserve Bank of Boston, MIT experts have begun designing and testing a technical framework through which Central Bank Digital Currency (CBDC) research can be performed in the U.S.
Credits: Image: MIT News, stock image

Caption:
In collaboration with a team at the Federal Reserve Bank of Boston, MIT experts have begun designing and testing a technical framework through which Central Bank Digital Currency (CBDC) research can be performed in the U.S.
Credits:
Image: MIT News, stock image

In collaboration with a team at the Federal Reserve Bank of Boston, MIT experts have begun designing and testing technical research through which further examination of a Central Bank Digital Currency (CBDC) can be performed in the U.S.

The effort, known as Project Hamilton, is in an exploratory phase, and the research is not intended as a pilot or for public deployment. Instead, the researchers have explored two different approaches that could be used to process transactions, and thus could indicate the technical feasibility of a potential CBDC model. In a process involving significant design flexibility, the MIT group tested factors such as the volume and speed of transactions, and the resilience of the systems in general, among other requirements for a viable digital currency.

“The core of what we built is a high-speed transaction processor for a centralized digital currency, to demonstrate the throughput, latency, and resilience of a system that could support a payment economy at the scale of the United States,” says Neha Narula, director of MIT’s Digital Currency Initiative and a research scientist at the MIT Media Lab, who led the effort with the Boston Fed. “It is important to note that this project is not a comment on whether or not the U.S. should issue a CBDC — but work like this is vital to help determine the answer to that question. This project serves as a platform for creating and comparing more viable designs, and provides a place to experiment and collaborate on more advanced digital currency functionality.”

Those findings have been released in a paper titled, “A High Performance Payment Processing System Designed for Central Bank Digital Currencies,” released by MIT and the Federal Reserve Bank of Boston. The Project Hamilton software, called OpenCBDC, has been released under an MIT open-source license as well. It is one piece of work among others being done on CBDC issues in the Federal Reserve system.

To be sure, any steps toward a digital version of currency would involve many additional policy decisions and software features that would need to be settled by the U.S. Congress and other regulatory experts. As the team points out in the paper’s executive summary, “several technical design questions remain open for investigation. The answers to these questions will have meaningful implications and consequences for what options are, or are not, available for policymakers.”

Indeed, Narula emphasizes, “The policy conversation around central bank digital currency is still in its infancy.” And in relation to that, she adds, “There are many research questions left to answer that we haven’t gotten to yet, such as the roles of intermediaries, how to promote access securely, and how to design for those who might not have smartphones or consistent internet access.”

Still, many countries are displaying interest in the concept of a CBDC: The Central Bank of the Bahamas, the Eastern Caribbean Central Bank, and the Central Bank of Nigeria have already issued CBDCs, and China is running a late-stage CBDC pilot project. The new research is a step toward a robust hypothetical CBDC model, at a scale that could be used by an economy the size of the U.S.

The Project Hamilton research collaboration between MIT and the Boston Fed began in August 2020, as an initiative to examine a hypothetical CBDC model. The work conducted so far represents phase one of the project, an evaluation of the fundamentals of transaction processing.

“We believe that even before the policy discussions begin in earnest, it is important to dive deeply into the technology questions, and this research was designed with that in mind,” says Jim Cunha, executive vice president of the Federal Reserve Bank of Boston. “While policy decisions impact system design, we also believe groundbreaking research can inform policy makers on what is possible.”

In each of the two digital currency designs the MIT and Boston Fed teams tested, users interact with a centrally administered transaction processor, using digital wallets with individual, cryptographic signatures that authorize the movement of funds. One ledger, which keeps a complete record of transactions in the order they were processed, turned out to be the slower of the two systems. “We found that it had pretty significant bottlenecks,” Narula says.

The researchers also note that the faster system, the one processing 1.7 million transactions per second, the transaction quantity “appears to scale linearly with the addition of more servers,” which would sustain an even larger volume of activity.

The team was aware that consumer privacy would likely be an essential consideration in the design of a working U.S. digital currency, and they designed relatively streamlined systems with that issue in mind.

“We created architectures where the central bank didn’t necessarily need to see or store [much] user information,” Narula says, while noting that ultimately CBDC privacy practices would be informed by policy choices.

The question of system resilience is also critical to any CBDC. In this case, modeling by the Project Hamilton researchers showed that if two large regions of the U.S. lost connectivity, the digital currency system could continue to operate elsewhere and would not suffer any data loss or system disruption.

Officials with the Boston Fed say the work represents an important step in evaluating the potential of a CBDC.

“Researching a hypothetical U.S. CBDC means you need to think about the highest possible stakes,” says Robert Bench, assistant vice president in the Secure Payments group of the Boston Fed. “The technical stress on a theoretical future digital dollar would be immense. We’re proud of the work by our team and MIT to build a processing engine which provides both the functionality and flexibility to understand how money may work for decades to come.”

As Narula emphasizes, there remains a wide array of questions about a CBDC that would need to be discussed among government officials, in public policy forums, and among software engineers, to determine the viability of a central bank digital currency and whether it could be built in a way that satisfies concerns about accessibility and inclusion.

The technical research can support different CBDC approaches, including direct-to-consumer models, while the government would likely have to determine whether financial institutions would play a role as well. And, as Narula pointed out in testimony last June before the U.S. House of Representatives Committee on Financial Services, about 36 percent of people in the U.S. who do not have bank accounts also do not own smartphones. In this and other areas, policy decisions and technology design are overlapping matters.

“It’s clearly an important way to build, implement, and potentially launch, in large part because monetary systems benefit from transparency and verifiability, and open-source offers those two things,” Narula says.

The researchers involved in Project Hamilton are now pursuing another phase of their research, in which they will analyze additional types of functionality related to a hypothetical digital currency. These could potentially include the tools needed for both privacy and compliance, matters relating to smart contracts and numerous other specified uses, auditability, and more.

“There are many important design questions that have not yet been resolved, and we look forward to doing more research to address those issues,” Narula says.

Researchers from MIT and the Federal Reserve Bank of Boston have developed a theoretical, high-performance transaction processor for a Central Bank Digital Currency using open-source software, reports Jason Brett for Forbes. "What is clear is that open-source software provides an important way to collaborate, experiment, and implement,” says Neha Narula, director of MIT’s Digital Currency Initiative. “In addition to supporting collaboration, monetary systems benefit from transparency and verifiability, which open-source offers."

Bloomberg reporter Allyson Versprille spotlights how researchers from MIT and the Federal Reserve Bank of Boston have released a new paper and open-source code, called OpenCBDC, aimed at furthering understanding of how a hypothetical central bank digital currency might be developed. Of the importance of making the software open-source, Neha Narula, director of the MIT Digital Currency Initiative, explains that “we believe that this is the best way to ensure that OpenCBDC is vetted by a large number of people--all of whom will bring unique knowledge, skills, and ideas for improvement.”

Reuters reporter Jonnelle Marte writes that researchers from MIT’s Digital Currency Initiative and the Federal Reserve Bank of Boston have developed two different approaches to processing transactions in a hypothetical digital currency. “The first phase of the multi-year project, dubbed ‘Project Hamilton,’ resulted in code that is capable of handling 1.7 million transactions per second,” writes Marte. “Researchers also found the ‘vast majority’ of transactions settled in under two seconds.”

Researchers from MIT and the Federal Reserve Bank of Boston have released a new paper and open-source code to help further understanding of how a hypothetical central bank digital currency might be developed, writes Tory Newmyer for The Washington Post. Neha Narula, director of the Digital Currency Initiative, explains that they aimed to “create a flexible system that can work with a variety of models.”

Unlocking the potential of blockchain technology