Thirty-six million people in the U.S. use an energy system developed by a handful of activists in the 1990s. An MIT scholar examines this unusual story.
Peter Dizikes | MIT News Office
Publication Date:
Press Inquiries 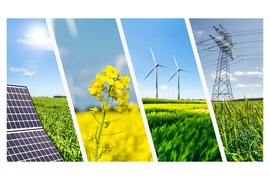 ↓ Download Image
Caption: In the mid-1990s, a few energy activists in Massachusetts had a vision: What if consumers had choice about the energy they consumed? Instead of being force-fed electricity sources selected by a utility company, what if cities, towns, and groups of individuals could purchase power that was cleaner and cheaper?
Credits: Image: stock image

Caption:
In the mid-1990s, a few energy activists in Massachusetts had a vision: What if consumers had choice about the energy they consumed? Instead of being force-fed electricity sources selected by a utility company, what if cities, towns, and groups of individuals could purchase power that was cleaner and cheaper?
Credits:
Image: stock image

In the mid-1990s, a few energy activists in Massachusetts had a vision: What if citizens had choice about the energy they consumed? Instead of being force-fed electricity sources selected by a utility company, what if cities, towns, and groups of individuals could purchase power that was cleaner and cheaper?

The small group of activists — including a journalist, the head of a small nonprofit, a local county official, and a legislative aide — drafted model legislation along these lines that reached the state Senate in 1995. The measure stalled out. In 1997, they tried again. Massachusetts legislators were busy passing a bill to reform the state power industry in other ways, and this time the activists got their low-profile policy idea included in it — as a provision so marginal it only got a brief mention in The Boston Globe’s coverage of the bill.

Today, this idea, often known as Community Choice Aggregation (CCA), is used by roughly 36 million people in the U.S., or 11 percent of the population. Local residents, as a bloc, purchase energy with certain specifications attached, and over 1,800 communities have adopted CCA in six states, with others testing CCA pilot programs. From such modest beginnings, CCA has become a big deal.

“It started small, then had a profound impact,” says David Hsu, an associate professor at MIT who studies energy policy issues. Indeed, the trajectory of CCA is so striking that Hsu has researched its origins, combing through a variety of archival sources and interviewing the principals. He has now written a journal article examining the lessons and implications of this episode.

Hsu’s paper, “Straight out of Cape Cod: The origin of community choice aggregation and its spread to other states,” appears in advance online form in the journal Energy Research and Social Science, and in the April print edition of the publication.

“I wanted to show people that a small idea could take off into something big,” Hsu says. “For me that’s a really hopeful democratic story, where people could do something without feeling they had to take on a whole giant system that wouldn’t immediately respond to only one person.”

Aggregating consumers to purchase energy was not a novelty in the 1990s. Companies within many industries have long joined forces to gain purchasing power for energy. And Rhode Island tried a form of CCA slightly earlier than Massachusetts did.

However, it is the Massachusetts model that has been adopted widely: Cities or towns can require power purchases from, say, renewable sources, while individual citizens can opt out of those agreements. More state funding (for things like efficiency improvements) is redirected to cities and towns as well.

For cities and towns, Hsu says, “Maybe you don’t own outright the whole energy system, but let’s take away one particular function of the utility, which is procurement.”

That vision motivated a handful of Massachusetts activists and policy experts in the 1990s, including journalist Scott Ridley, who co-wrote a 1986 book, “Power Struggle,” with the University of Massachusetts historian Richard Rudolph and had spent years thinking about ways to reconfigure the energy system; Matt Patrick, chair of a local nonprofit focused on energy efficiency; Rob O’Leary, a local official in Barnstable County, on Cape Cod; and Paul Fenn, a staff aide to the state senator who chaired the legislature’s energy committee.

“It started with these political activists,” Hsu says.

Hsu’s research emphasizes several lessons to be learned from the fact the legislation first failed in 1995, before unexpectedly passing in 1997. Ridley remained an author and public figure; Patrick and O’Leary would each eventually be elected to the state legislature, but only after 2000; and Fenn had left his staff position by 1995 and worked with the group long-distance from California (where he became a long-term advocate about the issue). Thus, at the time CCA passed in 1997, none of its main advocates held an insider position in state politics. How did it succeed?

Lessons of the legislation

In the first place, Hsu believes, a legislative process resembles what the political theorist John Kingdon has called a “multiple streams framework,” in which “many elements of the policymaking process are separate, meandering, and uncertain.” Legislation isn’t entirely controlled by big donors or other interest groups, and “policy entrepreneurs” can find success in unpredictable windows of opportunity.

Second, Hsu emphasizes, finding allies is crucial. In the case of CCA, that came about in a few ways. Many towns in Massachusetts have a town-level legislature known as Town Meeting; the activists got those bodies in about 20 towns to pass nonbinding resolutions in favor of community choice. O’Leary helped create a regional county commission in Barnstable County, while Patrick crafted an energy plan for it. High electricity rates were affecting all of Cape Cod at the time, so community choice also served as an economic benefit for Cape Cod’s working-class service-industry employees. The activists also found that adding an opt-out clause to the 1997 version appealed to legislators, who would support CCA if their constituents were not all bound to it.

“You really have to stick with it, and you have to look for coalition partners,” Hsu says. “It’s fun to hear them [the activists] talk about going to Town Meetings, and how they tried to build grassroots support. If you look for allies, you can get things done. [I hope] the people can see [themselves] in other people’s activism even if they’re not exactly the same as you are.”

By 1997, the CCA legislation had more geographic support, was understood as both an economic and environmental benefit for voters, and would not force membership upon anyone. The activists, while giving media interviews, and holding conferences, had found additional traction in the principle of citizen choice.

“It’s interesting to me how the rhetoric of [citizen] choice and the rhetoric of democracy proves to be effective,” Hsu says. “Legislators feel like they have to give everyone some choice. And it expresses a collective desire for a choice that the utilities take away by being monopolies.”

One last element in CCA passage was good timing. The governor and legislature in Massachusetts were already seeking a “grand bargain” to restructure electricity delivery and loosen the grip of utilities; the CCA fit in as part of this larger reform movement. Still, CCA adoption has been gradual; about one-third of Massachusetts towns with CCA have only adopted it within the last five years.

CCA’s growth does not mean it’s invulnerable to repeal or utility-funded opposition efforts — “In California there’s been pretty intense pushback,” Hsu notes. Still, Hsu concludes, the fact that a handful of activists could start a national energy-policy movement is a useful reminder that everyone’s actions can make a difference.

“It wasn’t like they went charging through a barricade, they just found a way around it,” Hsu says. “I want my students to know you can organize and rethink the future. It takes some commitment and work over a long time.”

Paper: “Straight out of Cape Cod: The origin of community choice aggregation and its spread to other states”

How cities can fight climate change most effectively