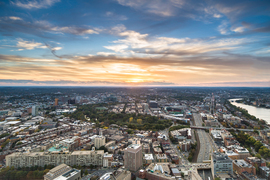 What explains how often people travel to a particular place? Your intuition might suggest that distance is a key factor, but empirical evidence can help urban studies researchers answer the question more definitively.

A new paper by an MIT team, drawing on global data, finds that people visit places more frequently when they have to travel shorter distances to get there.

“What we have found is that there is a very clear inverse relationship between how far you go and how frequently you go there,” says Paolo Santi, a research scientist at the Senseable City Lab at MIT and a co-author of the new paper. “You only seldom go to faraway places, and usually you tend to visit places close to you more often. It tells us how we organize our lives.”

By examining cellphone data on four continents, the researchers were able to arrive at a distinctive new finding in the urban studies literature.

“We might shop every day at a bakery a few hundred meters away, but we’ll only go once a month to the fancy boutique miles away from our neighborhood. This kind of intuitive notion had never been empirically tested. When we did it we found an incredibly regular and robust law — which we have called the visitation law,” says Carlo Ratti, a co-author of the paper and director of the Senseable City Lab, which led the research project.

The paper, “The universal visitation law of human mobility,” is published today in Nature.

To conduct the study, the researchers used anonymized cellphone data from large communications providers to track the movement of people in the metro areas of Abidjan, Ivory Coast; Boston; Braga, Lisbon, and Porto, Portugal; Dakar, Senegal; and Singapore.

Cellphone data are ideal for this kind of study because they establish both the residence area of people and the destinations they travel to. In some cases, the researchers defined areas visited by using grid spaces as small as 500 square meters. Overall, the researchers charted over 8 billion location-indicating pieces of data generated by over 4 million people, charting movement for a period of months in each location.

And, in each case, from city to city, the same “inverse law” of visitation held up, with the charted data following a similar pattern: The frequency of visits declined over longer distances, and higher-density areas were filled with people who had, on aggregate, taken shorter trips. To the extent that there was some variation from this pattern, the largest deviations involved sites with atypical functions, such as ports and theme parks.

The paper itself both measures the data and presents a model of movement, in which people seek out the closest locations that offer particular kinds of activity. Both of those buttress “central place theory,” an idea developed in the 1930s by German scholar Walter Christaller, which seeks to describe the location of cities and towns in terms of the functions they offer to people in a region.

The scholars note that the similarity in movement observed in very different urban areas helps reinforce the overall finding.

“This generalized behavior is not just something you observe in Boston,” Santi says. “From a scientific viewpoint, we are adding evidence about a generalized pattern of behavior.”

The researchers also hope the finding, and the methods behind it, can be usefully applied to urban planning. Santi suggests this type of study can help predict how substantial changes in the physical layout of a city will affect movement within it. The method also makes it possible to examine how changes in urban geography affect human movement over time.

“The visitation law could have many practical applications — from the design of new infrastructure to urban planning,” adds Ratti. “For instance, it could help implement the concept of the ‘Fifteen-Minute City,’ which aims to reorganize physical space around walkable neighborhoods and which has become very popular during the Covid-19 pandemic. Our law suggests that we can indeed capture a large fraction of all urban trips within a fifteen-minute radius, while leaving the rest — perhaps 10 percent — further away.”

Researchers from the MIT Senseable City Lab have uncovered a new travel pattern in human mobility that remains consistent across four continents, reports Beck Ferreira for Motherboard. “The notion that distance and frequency of visitation are related is in accordance with intuition,” the researchers explain. “What is surprising is that the relationship between these two quantities can be described by a simple and clean mathematical law.”

UPI reporter Brooks Hays writes that a new study by MIT researchers finds that people tend to follow a predictable travel pattern that remains consistent in countries around the world. The findings could help urban planners “better understand how populations interact with their surroundings, as well as assist city planners with zoning, infrastructure and other development decisions,” writes Hays.