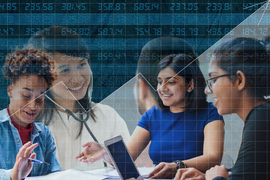 The stock market is a staple of business news, but it is unclear how meaningful stock prices are to the larger economy. Do changes in stock prices directly affect shorter-term consumption, or are they just leading indicators for subsequent economic activity? The U.S. Federal Reserve, for its part, usually seems to act as if stock-based wealth does help drive spending and employment. But is this correct?

A new study co-authored by an MIT economist brings data to the discussion and finds that increased stock market wealth has moderate but clear economic effects. After looking at the U.S. on a county-by-county basis, the study finds that after large market shifts, people spend about 3.2 cents per year out of each increased dollar of stock wealth they possess. There are also distinct employment effects in “nontradable” — that is, place-situated — industries.

“We found that the empirical effect is clear,” says Alp Simsek, an associate professor of economics at MIT and a co-author of a new paper detailing the study’s results. “Nontradable industry activities go up, including labor compensation in these nontradable industries. That provides direct evidence policymakers should care about.”

The paper, “Stock Market Wealth and the Real Economy: A Local Labor Market Approach,” appears in this month’s issue of the American Economic Review. The authors are Gabriel Chodorow-Reich, an associate professor of economics at Harvard University; Plamen T. Nenov, an associate professor at the Norwegian Business School in Oslo; and Simsek, the Rudi Dornbusch Career Development Associate Professor in MIT’s Department of Economics.

To conduct the study, the scholars examined multiple data sources, including IRS records from 1989 to 2015; stock market data from the Center for Research in Security Prices, affiliated with the University of Chicago Booth School of Business; county-level demographic and wealth information from the Federal Reserve Board’s Survey of Consumer Finances; and county-level employment and payroll information from the Bureau of Labor Statistics.

The paper’s county-level analysis helps disentangle whether the relationship between increased stock wealth and economic activity is to an extent causal, or whether stock-price increases are merely foretelling economic activity occurring independently.

Because not all counties have the same levels of stock wealth, tracking the differences in their levels of economic activity after the same changes in the markets helps pinpoint how much of that activity is driven by portfolio changes.

“Take Florida as an example,” Simsek says. “There are counties like Palm Beach and Miami that have very high stock wealth, and others, like those in the Florida panhandle, that do not. The stock wealth effect predicts that in Miami and Palm Beach, after a stock market boom, activity should be above average. … And that’s what we find in the data.”

Simsek, Chodorow-Reich, and Nenov also found this change almost entirely in nontradable industries, where location matters. The restaurant industry is nontradable, as are construction and many services; a lot of manufacturing activity, however, can be tradable.

Combining their county-level empirical analysis with a theoretical model of the U.S. economy, the scholars concluded that — absent countervailing actions by the U.S. Federal Reserve — a sustained 20 percent increase in stock valuations increases the nationwide labor bill by around 1.7 percent and increases nationwide hours worked by around 0.7 percent within two years.

The research also shows that it takes time for stock-market wealth to translate into spending, with changes starting to occur within a quarter of the market event but tending to peak from one to two years afterward.

“We do find a time lag,” Simsek says. “Which is natural, because financial markets move fast, but the real economy is slower. Perhaps it takes time for people to realize their wealth has changed or for their consumption habits to adjust. Or, once people start spending, restaurants take a while to adjust labor hours or compensation. It’s a demand-driven mechanism.”

“One of the things the Fed can do, if they want to stimulate economic activity, is cut the rate and increase stock wealth, and that will support economic activity,” Simsek says. To be sure, the U.S. Federal Reserve has seemingly acted to shore up market wealth many times in the past. The so-called “Greenspan put” or “Fed put” was the name given to U.S. Federal Reserve rate cuts halting market slides. (Alan Greenspan is a former Fed chair, and a “put” is a financial hedge designed to limit portfolio losses.)

Those moves drew some criticism from observers who felt Federal Reserve policies may have been too investor-friendly, although, as Simsek says, “It’s not so obvious that it’s a bad thing. If you don’t do that, according to our evidence, it would be a negative economic shock, and the Fed is not [necessarily] doing it to bail out the stockholders, but is doing it to support economic activity.”

To be sure, Simsek notes, there are still-larger moral debates about whether or not society has too much wealth tied up in stocks as opposed to other kinds of assets, or whether, just in terms of growth, too much wealth goes to stockholders as opposed to workers, who might spend more of their income relative to well-off investors. But whether the object of analysis is central-bank policy or structural issues about wealth, he notes, “We are providing empirical evidence for that.”

The research was supported, in part, by the National Science Foundation and the Molly and Dominic Ferrante Economics Research Fund.

States of growth: When and where entrepreneurship has thrived

Does free flow of capital make the economy more efficient?