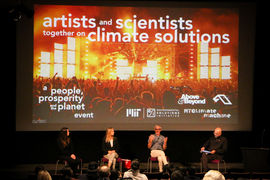 Audiences may travel long distances to see their favorite musical acts in concert or to attend large music festivals, which can add to their personal carbon footprint of emissions that are steadily warming the planet. But these same audiences, and the performers they follow, are often quite aware of the dangers of climate change and eager to contribute to ways of curbing those emissions.

How should the industry reconcile these two perspectives, and how should it harness the enormous influence that musicians have on their fans to help promote action on climate change?

That was the focus of a wide-ranging discussion on Monday hosted by MIT’s Environmental Solutions Initiative, titled “Artists and scientists together on climate solutions.” The event, which was held live at the Media Lab’s Bartos Theater and streamed online, featured John Fernandez, director of ESI; Dava Newman, director of the Media Lab; Tony McGuinness, a musician with the group Above and Beyond; and Anna Johnson, the sustainability and environment officer at Involved Group, an organization dedicated to embedding sustainability in business operations in the arts and culture fields.

Fernandez pointed out in opening the discussion that when it comes to influencing people’s attitudes and behavior, changes tend to come about not just through information from a particular field, but rather from a whole culture. “We started thinking about how we might work with artists, how to have scientists and engineers, inventors, and designers working with artists on the challenges that we really need to face,” he said.

Newman, who is also a professor in MIT’s Department of Aeronautics and Astronautics and has served as a NASA deputy administrator, said that while scientists and engineers can produce vast amounts of useful data that clearly demonstrate the dramatic changes the Earth’s climate is undergoing, communicating that information effectively is often a challenge for these specialists. “That data is just the data, but that doesn't change the hearts and minds,” she said.

“As scientists, having the data from our satellites, looking down, but also flying airplanes into the atmosphere, … we have the sensors, and then what can we do with it all? … How do we change human behavior? That's the part I don't know how to do,” Newman said. “I can have the technology, I can get precision measurements, I can study it, but really at the end of the day, we have to change human behavior, and that is so hard.”

And that’s where the world of art and music can play a part, she said. “The best way that I know how to do it is with artistic experiences. You can have one moving experience and when you wake up tomorrow, maybe you're going to do something a little different.” To help generate the compassion and empathy needed to affect behavior positively, she said, “that’s where we turn to the storytellers. We turn to the visionaries.”

McGuinness, whose electronic music trio has performed for millions of people around the world, said that his own awareness of the urgency of the climate issue came from his passion for scuba diving, and the dramatic changes he has seen over the last two decades. In diving at a coral reef off Palau in the South Pacific, he returned to what had been a lush, brightly colored ecosystem, and found that “immediately when you put your face under the water, you're looking at the surface of the moon. It was a horrible shock to see this.”

After this and other similar diving experiences, he said, “I just came away shocked and stunned,” and realizing the kinds of underwater experiences he had enjoyed would no longer exist for his children. After reading more on the subject of global warming,  “that really sort of tipped me over the edge. And I was like, this is probably the most important thing for living beings now. And that's sort of where I've remained ever since.”

While his group Above and Beyond has performed one song specifically related to global warming, he doesn’t expect that to be the most impactful way of using their influence. Rather, they’re trying to lead by example, he said, by paying more attention to everything from the supply chains of the merchandise sold at concerts to the emissions generated by travel to the concerts. They’re also being selective about concert venues and making an effort to find performance spaces that are making a significant effort to curb their emissions.

“If people start voting with their wallets,” McGuinness said, “and there are companies that are doing better than others and are doing the right thing, maybe it’ll catch on. I guess that’s what we can hope for.”

Understanding these kinds of issues, involving supply chains, transportation, and facilities associated within the music industry, has been the focus of much of Johnson’s work, through the organization Involved Group, which has entered into a collaboration with MIT through the Environmental Solutions Initiative. “It's these kinds of novel partnerships that have so much potential to catalyze the change that we need to see at an incredible pace,” she said. Already, her group has worked with MIT on mapping out where emissions occur throughout the various aspects of the music industry.

At a recent music festival in London, she said, the group interviewed hundreds of participants, including audience members, band members, and the crew. “We explored people's level of awareness of the issues around climate change and environmental degradation,” she said. “And what was really interesting was that there was clearly a lot of awareness of the issue across those different stakeholders, and what felt like a real, genuine level of concern and also of motivation, to want to deepen their understanding of what their contribution on a personal level really meant.”

Working together across the boundaries of different disciplines and areas of expertise could be crucial to winning the battle against global warming, Newman said. “That’s usually how breakthroughs work,” she said. “If we’re really looking to have impact, it’s going to be from teams of people who are trained across the disciplines.” She pointed out that 90 percent of MIT students are also musicians: “It does go together!” she said. “I think going forward, we have to create new academia, new opportunities that are truly multidisciplinary.”