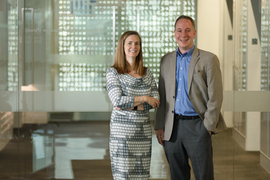 For all the progress that’s been made in the field of artificial intelligence, the world’s most flexible, efficient information processor remains the human brain. Although we can quickly make decisions based on incomplete and changing information, many of today’s artificial intelligence systems only work after being trained on well-labeled data, and when new information is available, a complete retraining is often required to incorporate it.

Now the startup Nara Logics, co-founded by an MIT alumnus, is trying to take artificial intelligence to the next level by more closely mimicking the brain. The company’s AI engine uses recent discoveries in neuroscience to replicate brain structure and function at the circuit level.

The result is an AI platform that holds a number of advantages over traditional neural network-based systems. While other systems use meticulously tuned, fixed algorithms, users can interact with Nara Logics’ platform, changing variables and goals to further explore their data. The platform can also begin working without labeled training data, and can incorporate new datasets as they become available. Perhaps most importantly, Nara Logics’ platform can provide the reasons behind every recommendation it makes — a key driver of adoption in sectors like health care.

“A lot of our health care customers say they’ve had AI systems that give the likelihood of somebody being readmitted to the hospital, for example, but they’ve never had those ‘but why?’ reasons to be able to know what they can do about it,” says Nara Logics CEO Jana Eggers, who leads the company with CTO and founder Nathan Wilson PhD ’05.

Nara Logics’ AI is currently being used by health care organizations, consumer companies, manufacturers, and the federal government to do things like lower costs and better engage with customers.

“It’s for people whose decisions are getting complicated because there’s more factors [and data] being added, and for people that are looking at complex decisions differently because there's novel information available,” Eggers says.

The platform’s architecture is the result of Wilson’s decision to embrace the complexities of neuroscience rather than abstract away from them. He developed that approach over more than a decade working in MIT’s Department of Brain and Cognitive Sciences, which has long held the mission of reverse engineering the human mind.

“At Nara Logics, we think neuroscience is on a really good track that’s going to lead to really exciting ways to make decisions that we haven't seen before,” Wilson says.

Wilson attended Cornell University for his undergraduate and master’s degrees, but once he got to MIT in 2000, he stuck around. Over the course of a five-year PhD and a seven-year postdoc, he created mathematical frameworks to simulate brain function.

“The community at MIT is really focused on coming up with new models of computation that go beyond what computer science offers,” Wilson says. “The work is connected with computer science, but also considers what our brain is doing that could teach us how computers work, or how computers could work.”

On nights and weekends during the final years of his postdoc, from 2010 to 2012, Wilson was also beginning to translate his algorithms into a commercial system in work that would be the foundation of Nara Logics. In 2014, his work caught the attention of Eggers, who had led a number of successful businesses but had grown jaded about the hype around artificial intelligence.

Eggers became convinced Nara Logics’ AI engine offered a superior way to help businesses. Even back then the engine, which the company refers to as Nara Logics Synaptic Intelligence, had properties that made it unique in the field.

In the engine, objects in customers’ data, such as patients and treatments, organize into matrices based on features they share with other objects, in a structure similar to what has been observed in biological systems. Relationships between objects also form through a series of local functions the company calls synaptic learning rules, adapted from cell- and circuit-based neuroscience studies.

“What we do is catalog all the metadata and what we call our Connectomes go in and mine the database of unstructured data and build links across all of it that relate these things,” Wilson explains. “Once you have that background, you can go in and say, ‘I like this, this, and this,’ and you let the engine crunch the data and give you matches to those parameters. What you didn’t have to do is have any notion of what the right answer was for lots of similar people. You skip that whole step.”

Each object in Nara Logics’ Synaptic Intelligence stores its properties and rules locally, allowing the platform to adjust to new data by updating only a small number of associated objects. The bottom-up approach is believed to be used by the brain.

“That’s totally different than deep learning or other approaches that just say, ‘We’re going to globally optimize everything, and each cell does what the global algorithm tells it,’” Wilson explains. “Neuroscientists are telling us each cell is making decisions on its own accord to an extent.”

The design allows users to explore relationships in data by “activating” certain objects or features and seeing what else gets activated or suppressed.

To give an answer, Nara Logics’ engine only activates a small number of objects in its dataset. The company says this is similar to the “sparse coding” believed to be used in higher brain regions, in which only a small number of neurons are activated in any given moment. The sparse coding principal allows the company to retrace its platform’s path and give users the reasons behind its decisions.

As the company has matured, Wilson has stayed plugged in to the MIT community’s research, and Nara Logics participated in the STEX25 startup accelerator, run by the MIT Startup Exchange.

Manufacturers are already using Nara Logics’ platform to better understand data from internet-of-things devices, consumer companies are using it to better connect with customers, and health care groups are using it to make better treatment decisions.

As Covid-19 disrupted industries and underscored the need for organizations to invest in adaptive software tools, Nara Logics nearly doubled its customer base. The founders are thrilled to be scaling a solution they feel is more collaborative and responsive to humans than other AI systems.

“We think the most important difference we’re contributing to is building an AI where people participate and people are in the loop — they’re cognizant and understanding and aware of what it’s doing,” Wilson says. “That helps them make smarter decisions every day, and those add up to make a big difference.”