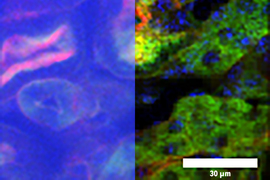 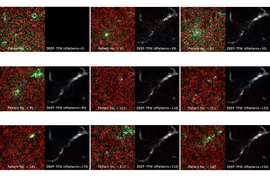 ↓ Download Image
Caption: These video stills show DEEP-TFM imaging of cortical vasculature. In the left-side panels, DEEP-TFM illumination is shown in red and acquired images are shown in green. The reconstruction is shown in the right panels. The reconstruction improves with the increasing number of illumination patterns, as in the bottom right.
Credits: Courtesy of the researchers

To create high-resolution, 3D images of tissues such as the brain, researchers often use two-photon microscopy, which involves aiming a high-intensity laser at the specimen to induce fluorescence excitation. However, scanning deep within the brain can be difficult because light scatters off of tissues as it goes deeper, making images blurry.

Two-photon imaging is also time-consuming, as it usually requires scanning individual pixels one at a time. A team of MIT and Harvard University researchers has now developed a modified version of two-photon imaging that can image deeper within tissue and perform the imaging much more quickly than what was previously possible.

This kind of imaging could allow scientists to more rapidly obtain high-resolution images of structures such as blood vessels and individual neurons within the brain, the researchers say.

“By modifying the laser beam coming into the tissue, we showed that we can go deeper and we can do finer imaging than the previous techniques,” says Murat Yildirim, an MIT research scientist and one of the authors of the new study.

MIT graduate student Cheng Zheng and former postdoc Jong Kang Park are the lead authors of the paper, which appears today in Science Advances. Dushan N. Wadduwage, a former MIT postdoc who is now a John Harvard Distinguished Science Fellow in Imaging at the Center for Advanced Imaging at Harvard University, is the paper’s senior author. Other authors include Josiah Boivin, an MIT postdoc; Yi Xue, a former MIT graduate student; Mriganka Sur, the Newton Professor of Neuroscience at MIT; and Peter So, an MIT professor of mechanical engineering and of biological engineering.

Two-photon microscopy works by shining an intense beam of near-infrared light onto a single point within a sample, inducing simultaneous absorption of two photons at the focal point, where the intensity is the highest. This long-wavelength, low-energy light can penetrate deeper into tissue without damaging it, allowing for imaging below the surface.

However, two-photon excitation generates images by fluorescence, and the fluorescent signal is in the visible spectral region. When imaging deeper into tissue samples, the fluorescent light scatters more and the image becomes blurry. Imaging many layers of tissue is also very time-consuming. Using wide-field imaging, in which an entire plane of tissue is illuminated at once, can speed up the process, but the resolution of this approach is not as great as that of point-by-point scanning.

The MIT team wanted to develop a method that would allow them to image a large tissue sample all at once, while still maintaining the high resolution of point-by-point scanning. To achieve that, they came up with a way to manipulate the light that they shine onto the sample. They use a form of wide-field microscopy, shining a plane of light onto the tissue, but modify the amplitude of the light so that they can turn each pixel on or off at different times. Some pixels are lit up while nearby pixels remain dark, and this predesigned pattern can be detected in the light scattered by the tissue.

“We can turn each pixel on or off by this kind of modulation,” Zheng says. “If we turn off some of the spots, that creates space around each pixel, so now we can know what is happening in each of the individual spots.”

After the researchers obtain the raw images, they reconstruct each pixel using a computer algorithm that they created.

“We control the shape of the light and we get the response from the tissue. From these responses, we try to resolve what kind of scattering the tissue has. As we do the reconstructions from our raw images, we can get a lot of information that you cannot see in the raw images,” Yildirim says.

Using this technique, the researchers showed that they could image about 200 microns deep into slices of muscle and kidney tissue, and about 300 microns into the brains of mice. That is about twice as deep as was possible without this patterned excitation and computational reconstruction, Yildirim says. The technique can also generate images about 100 to 1,000 times faster than conventional two-photon microscopy.

This type of imaging should allow researchers to more rapidly obtain high-resolution images of neurons in the brain, as well as other structures such as blood vessels. Imaging blood vessels in the brains of mice could be particularly useful for learning more about how blood flow is affected by neurodegenerative diseases such as Alzheimer’s, Yildirim says.

The technique could also lend itself to measuring neuronal activity, by adding voltage-sensitive fluorescent dyes or fluorescent calcium probes that light up when neurons are excited. It could also be useful for analyzing other types of tissue, including tumors, where it could be used to help determine the edges of a tumor.

The research was funded by the National Institutes of Health, including the National Institute of Biomedical Imaging and Bioengineering P41 program and the NIBIB Pathway to Independence Award, the Hamamatsu Corporation, the Samsung Advanced Institute of Technology, the Singapore-MIT Alliance for Research and Technology (SMART), the Center for Advanced Imaging at Harvard University, and the John Harvard Distinguished Science Fellowship Program.