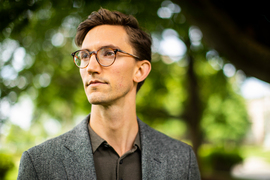 After a summer of billionaires in space, many people have begun to wonder when they will get their turn. The cost of entering space is currently too high for the average citizen, but the work of PhD candidate Martin Nisser may help change that. His work on self-assembling robots could be key to reducing the costs that help determine the price of a ticket.

Nisser’s fascination with engineering has been a consistent theme throughout a life filled with change. Born to Swedish parents, he spent a decade in Greece before moving to the UAE, and eventually to Scotland for his undergraduate degree. No matter what new school he attended, his favorite subjects remained the same. “The idea of using math and physics to build something tangible always clicked with me,” says Nisser. “As a kid, I had always wanted to be an inventor.”

By the time he completed his undergraduate degree, Nisser knew what he aspired to invent. His senior capstone project had drawn upon multiple disciplines and provided the perfect introduction to robotics. “We had to sift through all of the different things we learned in college and combine them to do something interesting. Multidisciplinarity is often essential in robotics and part of what makes it so alluring to me,” he says.

After discovering his love for robotics, Nisser enrolled in a master’s program in robotics, systems, and control at ETH Zurich, during which time he met a Harvard professor who directed the Harvard Microrobotics Laboratory and invited Nisser to write his thesis there. His thesis involved building robots that could fold to assemble themselves. “We used layers of materials including shape memory polymers, which are smart materials that can be programmed to changed their shape under different temperature conditions,” says Nisser. “This allowed us to program 2D multilayer sheets to fold in particular ways in order to acquire targeted 3D configurations.”

The experience brought Nisser to his current interest in exporing how robots can be automatically fabricated using both top-down processes like 3D printing and bottom-up processes like self-assembly. He notes that this engineering goal opens a wide door of academic questions. “The multidisciplinarity required to build these engineering systems — from mechanical and electrical engineering to computer science — means you’re always learning something new. Every once in a while, you get to apply a technique you’ve learned in one discipline to another, in a way it hasn’t been used before,” he says. “That’s usually when something interesting happens.”

Prior to beginning his PhD, Nisser also researched reconfigurable robots at the European Space Agency. This project helped him realize he could combine his passion for robotics with his interest in space. “Because every system launched into space has to fit within the confines of a rocket firing, space agencies are interested in structures that can self-reconfigure between smaller and larger shapes,” he says. “I saw a great opportunity to build on what I’d learned about self-folding robotics. I developed algorithms that would allow large numbers of spacecraft modules to move together, attach to one another, and then reconfigure together into a target shape.”

Now a PhD student in the HCI Engineering Group at MIT’s Computer Science and Artificial Intelligence Laboratory, Nisser has partnered with the MIT Space Exploration Initiative to continue studying self-assembly in space. His team is developing a new kind of 3D printing technique adapted to the space environment, allowing them to create novel structures without the constraints of gravity. He recently tested his work on a parabolic flight, which allowed him to experience weightlessness for several intervals of 20 seconds. This December, the project will be launched to the International Space Station with SpaceX for a 30-day science mission.

To Nisser, studying self-configuration and self-assembly is also key to addressing important social issues. He is particularly interested in how his research can improve sustainability and make advanced technology more affordable. “We typically build systems to perform a specific task, like a chair or a car. However the long-term vision is to be able to create systems from modular, smart components that let the system reconfigure and adjust its functionality to diverse needs,” Nisser says. “By addressing core challenges along the way, we aim to develop technology for the short term too.”

Nisser has already begun to address this challenge by constructing LaserFactory, an add-on device for only $150 that connects to laser cutters and produces custom-designed devices ranging from electronic wearables to functional drones. The fabrication process requires no further instructions to operate — finished drones can fly straight off the assembly line. The device has already been featured by the BBC and other outlets for its ingenuity. “The ability to print fully functional robots is also important for space, where creating on-demand electromechanical devices without any human intervention is paramount to enabling long-duration missions,” he adds.

In his free time, Nisser furthers his goal of democratizing technology by teaching introductory programming to incarcerated women. His lessons are through Brave Behind Bars, a program he and grad student Marisa Gaetz created last year after learning about the U.S. mass incarceration rate.  “Almost one in a hundred people in the U.S. today are incarcerated, and more than 80 percent of those will return to prison within a few years of release” he says. “Providing incarcerated people with educational opportunities that promote success in today’s digital world is one of the most effective ways to help reduce this recidivism.”

After graduating, Nisser hopes to continue teaching and conducting robotics research by pursuing a career as a professor. He looks forward to doing more projects related to space and hardware accessibility. “The closer we get toward automating assembly, the sooner we can reduce costs and increase accessibility to all kinds of advanced hardware systems,” says Nisser.

“Initiatives like One Laptop Per Child helped increase awareness of the tremendous benefits of connecting people to the internet by letting people share and create things digitally. The same analogy translates to hardware,”  he says. “By distributing fabrication via inexpensive printers or self-assembling hardware that remove the need for engineering expertise, we create an opportunity for people to share and create things physically. And that’s good for everyone.”