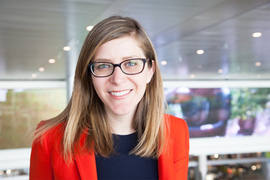 Katherine “Katie” Hammer, who is currently the chief deputy CFO for the City of Detroit, will become MIT’s next vice president for finance (VPF), effective Feb. 16. Before moving to Michigan, Hammer served in leading public finance roles for the City of Boston and the Commonwealth of Massachusetts.

Executive Vice President and Treasurer Glen Shor announced the appointment today in an email to MIT faculty and staff.

“With her strong financial and operational skills, commitment to service, and collaborative leadership style, Katie is very well-suited to take on this important role at the Institute,” wrote Shor, who served as VPF for nearly six years before being elected as executive vice president and treasurer last October.

As VPF, Hammer will oversee the delivery of financial and administrative services to the Institute. She will be responsible for treasury and planning, budget, financial analysis, accounting, tax, insurance, gift recording, and strategic sourcing and contracts, and financial systems, as well as financial operations, which include procurement, travel, accounts payable, merchant services, and payroll. The VPF also plays a critical role in ensuring the integrity of the Institute’s financial reporting and compliance functions.

“I love the work that MIT does both on a global scale to develop world-changing innovations, and locally to foster a school community that welcomes members from diverse backgrounds. My career trajectory has been very mission-driven, and I see that continuing with this move to MIT,” Hammer says.

“We’re thrilled to be coming back to Boston and rejoining the MIT community,” adds Hammer, whose husband completed MIT’s Leaders in Global Operations graduate program in 2017. She recalls that the program’s students and their families formed a tight-knit group that supported each other and gathered for meals in each others’ homes.

Hammer joined the City of Detroit in 2017, first as deputy chief operating officer and then as chief deputy CFO. During her tenure, she was a lead member of the team that designed and executed a financial roadmap to address the city’s pandemic-driven revenue shortfalls while maintaining critical services for residents. She also led a strategy to secure and maximize use of over $300 million in federal stimulus to support Covid-19 testing, case investigation, safety on public transportation, personal protective equipment, facility sanitization, public safety hazard pay, and other public health and safety activities in response to the pandemic.

From 2015 to 2017, Hammer was the budget director for the City of Boston, where she led development and implementation of a $3 billion operating budget and a $2 billion capital budget. Those budgets included targeted investments to advance early education, extend the school day for students, reduce homelessness, and improve public safety, along with thoughtful reforms to achieve city department savings and improve utilization of existing funds.

Hammer holds a bachelor’s degree in political science and economics from Washington University in St. Louis and a master’s degree in public affairs from Princeton University. She will be relocating this spring to Boston with her husband Michael and two daughters, ages 2.5 years and 11 months.

“I’m so looking forward to meeting the VPF team, learning from them, growing together, and finding opportunities to continue to support the priorities and goals of the Institute,” she says.