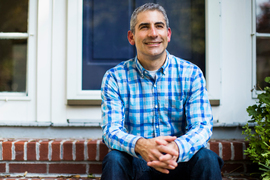 ↓ Download Image
Caption: Glen Shor was elected to the role of executive vice president and treasurer, effective immediately. He has served as the Institute’s vice president for finance since 2015.
Credits: Image: Adam Glanzman

Caption:
Glen Shor was elected to the role of executive vice president and treasurer, effective immediately. He has served as the Institute’s vice president for finance since 2015.
Credits:
Image: Adam Glanzman

The MIT Corporation today elected Glen Shor to the role of executive vice president and treasurer, effective immediately. He has served as the Institute’s vice president for finance since 2015.

Shor succeeds Israel Ruiz, who stepped down earlier this year. The executive vice president and treasurer (EVPT) leads the administrative and financial functions at MIT, working with the president, the Corporation, and members of MIT’s senior leadership team to support the Institute’s academic mission of education and research.

Since he joined MIT, “Glen has demonstrated again and again the skills and qualities that make him exceptionally well suited to the EVPT role, including his astute financial judgment and deep operational expertise; his gifts as a leader and mentor; his patient, engaging, collaborative style; and his enthusiasm for MIT’s mission,” President L. Rafael Reif wrote in an email to the MIT community today. “If you know MIT, you will appreciate his observation that the Institute is ‘delightfully complex,’ and Glen thrives in that atmosphere.

As EVPT, Shor will be the chief steward of the Institute’s $24.2 billion in financial assets and $4.0 billion operating budget, and will share responsibility for administering MIT’s capital plan. He will oversee the operating units under the EVPT umbrella, including Human Resources, Information Systems and Technology, MIT Medical, the Office of Public Safety and MIT Police, the Office of the Vice President for Finance, and the campus services and stewardship unit, which comprises MIT Facilities, the Office of Sustainability, and the Environment, Health, and Safety Office.

“The breadth of the EVPT’s responsibilities is energizing to me,” Shor says. “I love working in this community and am ready to take on this new role with the passion and commitment that is a hallmark of MIT.”

As vice president for finance, Shor was a lead member of a team that bolstered MIT’s financial resilience, conserving the Institute’s endowment while also enabling strategic initiatives, contributing to central reserves, and proactively planning for budget stresses — actions that have allowed MIT to respond to the challenges of Covid-19 from a position of strength.

He has also been dedicated to improving administrative operations, enhancing procurement systems, payroll timing, expense reimbursement, and more, to make doing business at MIT “more streamlined and intuitive, and with less red tape,” he says.

Before joining MIT in 2015, Shor served for eight years in Gov. Deval Patrick’s administration. From 2013 to 2014, he was the secretary of administration and finance for the Commonwealth of Massachusetts, where he managed a $46 billion state budget and 17 agencies. Prior to that he was the executive director of the Massachusetts Health Connector, overseeing the programs, operations, and staff of the Commonwealth’s public health insurance exchange.

Reflecting on his experience working for the commonwealth and MIT, Shor says he has found that having both the patience for broad-based engagement and an affinity for complexity is essential for leaders in his field, including the EVPT.

“At MIT, the way to get things done thoughtfully and successfully is to engage a lot of different components of our community. It’s only through this robust engagement that we can come up with the right solutions and ensure our community feels vested in the trajectory of MIT,” he says.

Before serving in the Patrick administration, Shor was senior policy counsel and assistant attorney general in the Office of the Attorney General of Massachusetts, a senior policy aide to former U.S. Rep. Martin T. Meehan, chief counsel to U.S. Sen. Charles E. Schumer, and a public interest attorney.

Shor holds a BA in history from Yale University and a law degree from Harvard Law School.