Secretary for administration and finance for the Commonwealth of Massachusetts will join MIT in January.
MIT News Office
Publication Date:
Press Inquiries 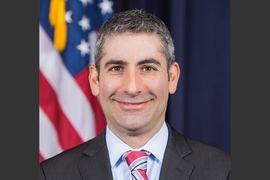 Credits:
Photo: Commonwealth of Massachusetts, Office of the Governor

Glen Shor, who is now secretary of administration and finance for the Commonwealth of Massachusetts, will join MIT in January as its next vice president for finance (VPF). Israel Ruiz, executive vice president and treasurer, announced the news today in an email to MIT faculty and staff.

Shor has worked for Gov. Deval Patrick’s administration since 2007. Before assuming his current role in 2013, he served as executive director of the Massachusetts Health Connector, overseeing the Commonwealth’s public health insurance exchange from 2010 to 2012; as assistant secretary for health care policy and deputy general counsel; and as policy director in the Commonwealth’s Executive Office for Administration and Finance from 2007 to 2010.

“Glen brings exceptional financial, operational, and leadership skills to the position of VPF. He has a deep commitment to service and a collaborative leadership style that resonate with the MIT culture,” Ruiz wrote.” I have the greatest enthusiasm for the contributions Glen will make to the Institute.”

In his new role, Shor will lead a team that is charged with delivering effective financial and administrative services to the Institute. As VPF, he will have responsibility for budget, financial analysis, accounting, and tax functions, as well as financial operations, which include procurement, sourcing, travel, accounts payable, and payroll. The VPF also plays a critical role in ensuring the integrity of the Institute’s financial reporting and compliance functions.

“The vice president for finance plays a vital role as a strategic steward of MIT’s resources,” MIT President L. Rafael Reif says. “With the breadth and intensity of his past experience, Glen Shor will be a tremendous addition in this post.”

“I am excited to join MIT as vice president for finance,” Shor says. “I look forward to joining an exceptional finance team in supporting MIT’s mission of advancing knowledge and progress through world-class academics and research.”

As secretary of administration and finance, Shor was responsible for managing state finances and budgetary activities, including development of the Commonwealth’s operating and capital budgets. He oversaw 17 state agencies with more than 3,300 employees providing core administrative services, including state-tax collection, information technology services, and human resource management. As chair of the Board of the Massachusetts Health Connector, Shor continued to lead health coverage expansion in the Commonwealth; he also served on the boards of the Health Policy Commission and Massachusetts Life Sciences Center. Previously, as assistant secretary for health care policy, he was a lead policy person for implementing health care reform in Massachusetts, and was profiled in the Boston Globe Magazine in 2012 for his leadership.

Shor holds a BA in history from Yale University, awarded in 1993, and earned a law degree from Harvard University in 1996. He lives in Needham, Mass., with his wife, Ellen, and two children.