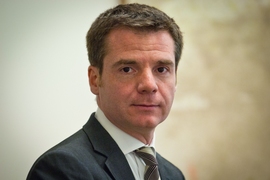 Israel Ruiz will step down next year as MIT’s executive vice president and treasurer, a position he has held since 2011. President L. Rafael Reif announced the news today in a letter to MIT faculty and staff.

“Widely respected across MIT, Israel is a brilliant strategic thinker whose commitment to excellence has advanced innovative solutions to complex challenges while earning broad support along the way,” Reif wrote. “His efforts have transformed many aspects of our campus to better serve and support the MIT community. Since my earliest days as provost, he has been among my most important advisors.”

Ruiz, who has played a key role over the past decade in numerous MIT initiatives to advance innovation and entrepreneurship — efforts ranging from MIT’s Kendall Square Initiative to the launches of MITx, edX, and The Engine — plans to devote the next chapter of his career to efforts outside of academia in which he can more directly drive innovation and impact.

“I am immensely proud of my work to help launch these transformative initiatives,” Ruiz says. “At the same time, considering the accomplishments of the last decade and my career at MIT, I’ve been contemplating a change over the last couple of years. I feel it is time for me to focus firsthand on opportunities that accelerate innovation in the way this community has inspired me to do.”

Ruiz expects to transition out of his role at MIT during the spring semester. In his letter to the community, President Reif indicated that he will work in the coming months with members of Ruiz’s senior team — including Vice President for Finance Glen Shor and Vice President for Campus Services and Stewardship Joe Higgins — to determine how best to allocate Ruiz’s responsibilities.

Ruiz arrived at MIT as a master’s student in the MIT Sloan School of Management. After completing his degree in 2001, he became a consultant to MIT, serving former president Charles Vest and former provost Robert Brown. In 2002, Ruiz formally joined MIT as manager of financial planning and analysis, becoming associate director of the Office of Budget and Financial Planning in 2003. He was named director of finance in 2005, leading an Institute-wide rebalancing that several years later yielded the first balanced general unrestricted budget in 15 years.

Ruiz was named vice president for finance in 2007; in his letter to the community, President Reif noted that MIT has not had an operating loss since then. Ruiz became MIT’s executive vice president and treasurer in 2011.

In addition to strengthening MIT’s financial position, Ruiz has played an instrumental part in many of MIT’s major initiatives of the past decade. For instance, guided by President Reif’s vision of a new model for driving innovation from the lab to commercial reality, Ruiz led the development of The Engine, an accelerator for “tough tech” entrepreneurs from MIT and across the Boston area.

Launched in 2016, The Engine has since provided selected startups with specialized lab infrastructure and substantial capital — as well as an experienced support network. Ruiz brought in significant commitments for The Engine’s first $205 million venture fund and recruited Katie Rae as The Engine’s founding president and CEO. To date, The Engine has supported 20 companies.

Ruiz’s efforts to foster innovation in Cambridge have also included his extensive work with Provost Martin Schmidt and the MIT Investment Management Company (MITIMCo) to reshape Kendall Square, enhancing the dynamism of what has become home to one of the world’s greatest concentrations of innovative companies. He was central to MIT’s 2017 agreement with the federal government to redevelop the John A. Volpe National Transportation Systems Center, starting a process to turn a 14-acre parcel in Kendall Square into a more vibrant mixed-use site that will benefit MIT’s mission and the Cambridge community.

“Israel’s quiet leadership and trusted partnership have produced a dramatic change in and around Kendall Square,” says MITIMCo President Seth Alexander. “His vision has transformed MIT’s neighborhood into one of the most dynamic innovation districts anywhere in the world.”

In 2018, Ruiz played the key role in developing financial models and funding strategies to underpin the MIT Stephen A. Schwarzman College of Computing, MIT’s most significant structural change since the 1950s. He also played a critical role in negotiating the college’s $350 million foundational gift.

“I feel incredibly fortunate to have worked with Israel on several projects including The Engine and the MIT Schwarzman College of Computing,” says Dean of Engineering Anantha Chandrakasan. “He is highly collaborative, has always engaged energetically with our community in launching new initiatives, and has consistently offered me excellent advice. I continue to be grateful for his extraordinary work and leadership in creating a robust strategy during the 2008 financial crisis, and in keeping MIT on sound financial footing ever since.”

“What Israel has led and executed has been amazing to watch,” Chancellor Cynthia Barnhart says. “Through his leadership, vision, and partnership, we are seeing a transformation of our student residences, and of our student life and academic facilities. His deep commitment to our students has been reflected in his sustained support for key elements of the MIT student experience and education, including financial aid, student well-being, MindHandHeart, and MITx.”

Ruiz has also focused on improving services for the broader MIT community. Other accomplishments, working with Executive Director Robin Elices, have included the digital platform MIT Atlas and the MIT Atlas Service Center, as well as a new MIT Welcome Center expected to open in Kendall Square next summer. With Ruiz’s guidance, MIT has also become a leader in providing options and incentives to help employees improve their commutes while reducing vehicles on the road. According to a recent Boston Globe series, “No other major Boston-area employers … offer commuter incentives with the scale and sophistication of MIT’s.”

“I have been inspired by MIT for over two decades, since the very first day I arrived on campus as an admitted student and met Professor Paul Samuelson,” Ruiz says. “I am still mesmerized by what MIT and its brilliant people accomplish for the world.”

An engine for game-changing innovation