An engine for game-changing innovation 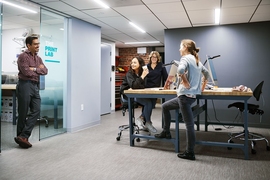 ↓ Download Image
Caption: The Engine’s team of 21 full time employees combines deep technical knowledge with entrepreneurial expertise to help the entrepreneurs it invests in commercialize their transformative technologies.
Credits: Courtesy of The Engine

Caption:
The Engine’s team of 21 full time employees helps the entrepreneurs it invests in commercialize their transformative technologies.
Credits:
Courtesy of The Engine

In 2016, MIT launched The Engine as a new way to fund and support Boston-area entrepreneurs who are using transformative technologies to address the world’s most pressing problems.

By definition, these entrepreneurs’ plans for impact were as ambitious as they were uncertain; each would need to overcome fundamental technical and business challenges as they readied their breakthrough innovations to compete with legacy systems and technologies.

Such uncertainty is often a deal breaker for venture capitalists, who prefer to invest in companies with easier paths to profitability than many startups working with cutting-edge technologies can promise. But The Engine, as MIT President L. Rafael Reif announced, would prioritize “breakthrough ideas over early profit, helping to shorten the time it takes these startups to become ‘VC-ready,’ providing comprehensive support in the meantime, and creating an enthusiastic community of inventors and supporters who share a focus on making a better world.”

In the three years since its inception, The Engine has bridged the gap between “tough tech” companies and venture capital with remarkable success. It has invested in 20 startups to date — companies working on quantum computing, long-term energy storage, cancer therapies, nuclear fusion, and more. Those companies have raised more than $300 million in total venture capital to date and collectively employ more than 280 people.

And much of The Engine’s early success lies beyond the numbers. Even as the firm’s team immerses itself in some of the hardest problems of science and engineering, its main focus remains on people. A core tenet of The Engine’s mission is to turn technical pioneers into leaders. Its emphasis on community and networking is also reflected in the Tough Tech Summit it hosts each year.

Consequently, The Engine’s footprints are all over the world-changing paths its founders are traveling. Now, with its recently announced plans to add 200,000 square feet of work and lab space — enough to accommodate 1,000 entrepreneurs — that footprint is about to get a lot bigger.

“It’s so inspiring to see the transformational innovations coming out of The Engine,” says MIT Executive Vice President and Treasurer Israel Ruiz, who also serves as chair of The Engine’s board of directors. “We’re all excited to see the original expansion plans come to reality, and I can’t wait to see how The Engine and its portfolio companies impact the region and the world.”

Founded around a mission

The Engine provides “patient” funding, mentoring, work and lab space, specialized equipment, and an extensive network to entrepreneurs working on transformative technologies. As a for-profit, public-benefit corporation, it has a unique structure, particularly in academia. But its creation didn’t surprise Katie Rae, who became its CEO and managing partner in 2017.

“MIT is very willing to break new ground and try something unusual if it will tackle a big problem or impact the world,” Rae says.

From the beginning, The Engine has sought out radically different approaches to some of the world’s most intractable problems — the kinds of ideas that might send more risk-averse investors running.

Among the first seven startups The Engine invested in were Form Energy, which is using inexpensive alternatives to lithium to develop a new battery capable of storing energy from renewable sources for months at a time; Analytical Space, which is deploying a network of small satellites in low Earth orbit to improve the tracking of things like agricultural production, industrial assets, and weather; and Kytopen, which is developing an electric cell-engineering tool capable of delivering DNA to bacterial cells up to 10,000 times faster than current methods.

“We want to create really important, breakthrough companies that last 100 years,” Rae says. “They have to be going after really big change, really big markets, and we want to give them an advantage; that’s our infrastructure, that’s our network.”

The approach has allowed many innovators in the Boston area to pursue the full potential of their technologies in an environment that keeps them focused on the real-world problems they’re trying to solve.

“I think a lot of the companies The Engine has invested in would not have been funded, or teams wouldn’t have formed, without significant pre-seed or seed capital,” says Adam Behrens, the CEO of Cambridge Crops, which has developed a natural, edible coating capable of dramatically extending the shelf life of food.

When The Engine made its first financial commitment to the company in 2018, Cambridge Crops consisted of Behrens and co-founder Sezin Yigit dipping pineapples into its coating in the back of a warehouse. This summer, the company raised a $4 million seed round and hopes to earn approvals from the Food and Drug Administration next year.

Cambridge Crops’ progress is not unique. In fact, all seven of The Engine’s first investments have raised additional funding in the form of investments or grants since The Engine’s early support. The companies have used that money to move into their own work spaces, hire local talent, and deploy their technologies in the areas that need them most.

Those technologies are not limited to the physical realm. New approaches in artificial intelligence and other kinds of “deep software” have also featured prominently in The Engine’s investment strategy.

Another one of The Engine’s early investments was iSee, which is developing humanistic AI to advance the capabilities of autonomous vehicles. Co-founders Yibiao Zhao and Chris Baker based the technology on theory of mind, or the ability to infer the intents and beliefs of others. The technology enables vehicles to deal with uncertainty by considering context and discerning the intentions of other drivers.

Zhao, fresh off a postdoctoral research stint in the lab of MIT Professor Josh Tenenbaum, faced a steep learning curve when he began serving as the company’s chief executive in 2017. Since then, iSee has recruited a team of full stack engineers, deployed iSee’s software on roads in pilots with Fortune 400 companies, and, most recently, raised a $15 million funding round led by the well-known VC firm Founders Fund.

Rae thinks the success of The Engine’s portfolio has made tough tech companies more attractive investments for corporations and venture capitalists.

“We've uncovered many very important companies and brought them to market,” Rae says. “We've gathered a phenomenal group of founders, and I think we've excited a lot of people about this area of investment.”

Leveraging its ties across industry, academia, and government, The Engine has also helped facilitate entirely new kinds of collaborations, like the one that formed around Commonwealth Fusion Systems (CFS), a company pursuing what has been called the holy grail of energy.

The company is working to develop a potentially unlimited, carbon-free energy source based on nuclear fusion, the reaction that powers stars like our sun. CFS was launched as part of a collaboration with MIT’s Plasma Science and Fusion Center and with funding from the Italian energy corporation Eni.

“In the very beginning of CFS, there were a lot of people around who really loved the idea and wanted to see it happen, but didn't really want to take the first steps,” CFS co-founder and CEO Bob Mumgaard SM ’15 PhD ’15 says of early 2018, before his company had raised funding. “Those first steps are really hard to get when the idea is really big. It's sort of a standoff; everyone's ready to go, but who will be the first person to move? The Engine was really the first one to say, ‘We're going to jump in,’ and as soon as they did that, it broke the ice. It was so important to have The Engine in the room.”

A pillar for progress

The Engine’s expansion plans, announced in August, will increase its space sevenfold and place it squarely between Kendall Square and MIT’s campus. That should only enhance what is already a deeply collaborative environment.

“It’s a like-minded community that expects excellence from one another,” Behrens says. “We’re all doing really good things, and trying to do big things; that takes diligence and execution, but it also takes support.”

“Sometimes, entrepreneurs’ first decision when they start a company is to move to the [San Francisco] Bay Area,” Zhao says. “The Engine is the type of investor that wants to provide an environment for the founders from Boston to stay here and grow their team here. It’s working hard to be the influencer that makes the Boston area really tech friendly.”

Engine CEO Katie Rae speaks with Arielle Pardes of Wired about the need to invest in companies that are tackling the world’s most urgent problems. “We back transformational technology that could shape a market and solve a huge world problem all in a go,” says Rae. “But it requires patience, it requires capital and it requires imagination on how to get these types of companies to market.”

The Engine expands, responding to rapid growth of “tough tech”