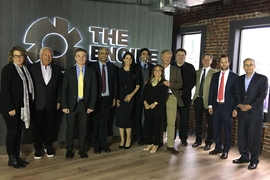 Just months after its launch, MIT’s new startup accelerator The Engine yesterday closed its first investment fund for over $150 million, which will support startups developing breakthrough scientific and technological innovations with potential for societal impact.

With funding secured and leadership in place, The Engine is now focusing on selecting its first group of investments this year.

Announced at a launch event last October, The Engine combines an accelerator, an open network of technical facilities, and a fund, which together will provide stable financial support and access to costly resources for startups. Focus will be given to startups developing “tough” technologies — breakthrough ideas that require time to commercialize — in a range of sectors including robotics, manufacturing, health tech, biotechnology, and energy.

“From the beginning, our vision for The Engine has been to foster the success of ‘tough-tech’ startups with great potential for positive impact for humanity,” MIT President L. Rafael Reif says. “By enabling crucial investments in The Engine’s first portfolio of companies, the funds announced today will also strengthen the local innovation ecosystem and the regional economy.”

Of the total capital raised for the fund — officially named The Engine Accelerator Fund I, L.P. — MIT invested $25 million. The remainder came from a small group of investors aligned with the fund’s mission.

In February, The Engine named Katie Rae, a veteran tech entrepreneur and investor, as its president and CEO and as managing partner of its first investment fund. In that announcement, The Engine also announced membership of its Board of Directors and Investment Advisory Committee, which includes MIT and business leaders, seasoned entrepreneurs, and experienced venture capitalists.

“Now that we have the funding in place and our space is opening, we can begin to select our first startups. I can’t wait to get started working with the entrepreneurs,” says Rae. “Helping entrepreneurs achieve their visions is what I’m most passionate about, and we’re going to create a community where founders help each other succeed.”

Closing The Engine’s first fund so soon after its public announcement shows great promise, says Rae, who previously served as managing director of the popular startup accelerator Techstars Boston. “There is strong interest, and people are bullish on what’s coming out of MIT and Boston. We’re looking for startups with breakout technologies and great founding teams that want to build their companies in the New England region,” she says.

“Thanks to a small group of investors deeply committed to realizing The Engine’s vision, we’ve already reached our goal of $150 million for this first fund,” says MIT Executive Vice President and Treasurer Israel Ruiz, who serves as chair of The Engine’s Board of Directors. “But we may be able to consider additional contributions from investors that are highly aligned with The Engine’s mission.”