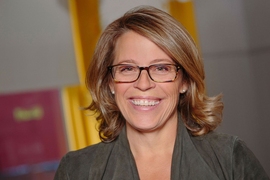 ↓ Download Image
Caption: Katie Rae has been named The Engine's president and CEO and managing partner of its first investment fund.
Credits: Courtesy of Katie Rae

Caption:
Katie Rae has been named The Engine's president and CEO and managing partner of its first investment fund.
Credits:
Courtesy of Katie Rae

MIT’s new startup accelerator The Engine today named Katie Rae, a veteran tech innovator, entrepreneur, and investor, as its president and CEO and as managing partner of its first investment fund.

“We launched The Engine to offer ‘tough-tech’ innovators working on solutions to serious and difficult challenges a realistic pathway to the marketplace,” MIT President L. Rafael Reif says. “By filling this need, The Engine is poised to become a key factor in the success of our innovation ecosystem. With her exceptional network and depth of experience, her infectious optimism, and her vision of what it takes to help ambitious startups achieve lasting success, Katie Rae will make sure that The Engine lives up to its potential.”

In today’s announcement, The Engine also announced the membership of its Board of Directors and Investment Advisory Committee, which includes MIT and business leaders, seasoned innovators and entrepreneurs, and experienced venture capitalists.

Announced last October, The Engine will support startups developing breakthrough scientific and technological innovations aimed at transformative societal impact. Designed to meet an underserved need, it combines an accelerator, an open network of technical facilities, and a fund, which together aim to provide stable financial support and access to costly resources for startups creating capital- and time-intensive technologies.

With leadership in place, The Engine will now focus on selecting the first group of startups for the accelerator. An information session is planned for Feb. 28, where startups can learn more about The Engine.

“The hiring of Katie Rae as The Engine’s CEO and managing partner marks an inflection point, and now The Engine will really begin to take shape,” says MIT Executive Vice President and Treasurer Israel Ruiz, who serves as the chair of The Engine’s Board of Directors. “Katie will build an extraordinary team that will include scientific and technical expertise. We are well on the path to help accelerate the most transformative ideas through to commercialization, and help make a better world.”

The “ringmaster” of Boston’s startup scene

In her role as president and CEO, Rae will help start and lead The Engine, which includes a shared-services component and an investment component. The shared-services component provides access to legal, technology licensing, technical, and administrative services, and capital-intensive equipment; the investment component includes a $150 million fund that will provide early-stage financial support to startups in the accelerator.

This is familiar territory for Rae, who comes to The Engine with a strong background in managing startup accelerators and business-innovation programs in Boston and Cambridge — two of which she co-founded. A 2012 Boston Globe article, in fact, labeled Rae as the “high-profile ringmaster of Boston’s start-up circus.”

“I couldn’t be more thrilled to be part of The Engine,” Rae says. “Ten years from now, this will be seen as a ground-breaking model, recognized around the world for creating both a vibrant set of funds and the programs that founders need to create high-impact companies. I can’t wait to get started.”

From 2010 to 2014, Rae served as managing director of Techstars Boston, a popular startup accelerator that provides mentorship and seed-stage investments for technology-oriented companies, and received wide praise for her work.

While there, Rae raised and managed two funds to support more than 70 startups that have gone on to raise more than $400 million total. She also hired and managed a team of mentors, and helped better connect Techstars with universities, industry, and other accelerators. In 2013, Fast Company named Rae one of the most creative people in business for her work in turning Techstars “into a thriving innovation hub.” Rae still serves as chair for the accelerator, providing guidance to current leadership.

Currently, Rae is co-founder and managing director of Project 11 Ventures, a pre-seed venture fund headquartered in Boston that invests in tech-driven startups. Launched in 2014, the firm now supports 19 actively growing startups focused on hardware, cloud services, the Internet of Things, materials sciences, and software. She also co-founded Startup Institute in 2012 and currently serves as chairperson. With offices in Boston and New York, Startup Institute provides students with skills, networks, and other resources necessary to find careers at high-growth startups. So far, the program has graduated more than 1,500 students, with a 90 percent job-placement rate three months after graduation.

From 2007 to 2010, Rae was senior director of products for Microsoft Startup Labs in Cambridge (now Microsoft Research Fuse Labs), where she guided teams in developing 20 new technologies and projects for the corporation and established Microsoft’s ongoing relationship with the MIT $100K Entrepreneurship Competition.

Since 2015, Rae has served as an entrepreneur-in-residence at the Harvard Business School. She also co-created 6.898 (Linked Data Ventures) for the MIT Sloan School of Management and co-taught the course from 2010 to 2014.

Rae was elected by The Engine’s Board of Directors after a lengthy search process. Criteria for the position included strong experience in leading startup accelerators and in venture capital firms, as well as a deep knowledge of the local innovation and entrepreneurial ecosystem, among other conditions.

“The board elected Katie Rae to this position because of her bold vision for The Engine and her passion to support entrepreneurs with breakthrough ideas,” says Sue Siegel, CEO of GE Ventures and a member of The Engine’s Board of Directors. “Having a woman entrepreneur and innovator leading The Engine will truly be an inspiration for young women scientists, engineers, and technologists.”

“We are fortunate to have identified such an outstanding individual to lead The Engine,” adds MIT Provost Martin Schmidt, who helped launch The Engine. “Katie brings broad experience in running accelerators as well as investment expertise, having advised hundreds of founders and invested in nearly 100 companies at the earliest stages of formation. She is deeply committed and connected to the innovation ecosystem in and around Kendall Square and the surrounding region.”

Managing and guiding The Engine

In today’s announcement, The Engine also named all members of its Board of Directors and Investment Advisory Committee. The members are:

The Board of Directors is responsible for the general management of The Engine and aligning The Engine’s public benefit purpose and activities with MIT’s mission. The Investment Advisory Committee, appointed by the Board of Directors, provides guidance to the board and president on the strategic direction and investment policy for the fund.

Chandrakasan is also leading a series of MIT internal working groups, charged by Schmidt, that are composed of faculty, postdocs, students, and staff with specialized expertise. Their work is aimed at guiding policy development and simplifying procedures to make it easier for MIT students to become involved with The Engine and to create a model for other universities. “Katie will provide deep connections between the internal MIT ecosystem, The Engine, and the surrounding Boston entrepreneurial ecosystem,” Chandrakasan says. “This is an exciting moment for The Engine, for MIT, and for the region.”

Katie Rae, CEO and managing partner of The Engine, speaks with Fortune reporter Renae Reints about The Engine’s commitment to nurturing startups that require more time and patient capital. Rae explains that The Engine “has an investing horizon of up to 18 years, which allows us to think about bigger, longer-term bets—and these could be world-changing.”

WBUR reporter Asma Khalid reports on how The Engine could help the Boston-area innovation ecosystem. Katie Rae, president and CEO of The Engine, explains that The Engine will support startups focused on tough technologies, which “take longer than most venture capital firms want to take bets on."

Katie Rae, president and CEO of The Engine, speaks with Meghna Chakrabarti of Radio Boston about her new role and why The Engine is aimed at addressing the gap between science and commercialization. Rae explains that The Engine will be focused on “investing very early into the translational stage for science-oriented startups.”

Katie Rae, CEO and president of The Engine, speaks with Boston Globe reporter Scott Kirsner about the new venture, which is aimed at supporting startups focused on “tough tech.” Rae says The Engine is “a very hopeful project in my mind — investing in important ideas over the long-term.”

Community forum gives insight into how The Engine will run