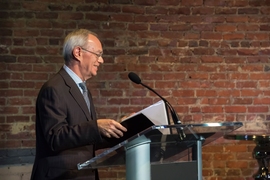 ↓ Download Image
Caption: “If we hope for serious solutions to the world’s great challenges, we need to make sure the innovators working on those problems see a realistic pathway to the marketplace,” MIT President L. Rafael Reif said at an Oct. 26 event celebrating the launch of The Engine.
Credits: Photo: Andy Ryan 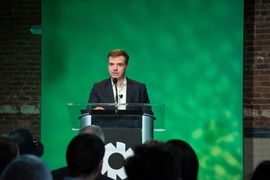 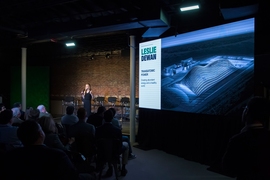 ↓ Download Image
Caption: Leslie Dewan, co-founder and CEO of Transatomic Power, pictured here, and other panelists discussed how the initiative could benefit their work and the region, and offered advice on fine-tuning The Engine.
Credits: Photo: Andy Ryan 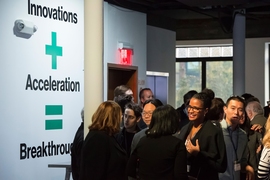 Caption:
“If we hope for serious solutions to the world’s great challenges, we need to make sure the innovators working on those problems see a realistic pathway to the marketplace,” MIT President L. Rafael Reif said at an Oct. 26 event celebrating the launch of The Engine.

Caption:
Leslie Dewan, co-founder and CEO of Transatomic Power, pictured here, and other panelists discussed how the initiative could benefit their work and the region, and offered advice on fine-tuning The Engine.

At the recent launch event for The Engine — MIT’s new enterprise that aims to support local startups working on transformative technologies — MIT President L. Rafael Reif and other speakers discussed the numerous benefits the initiative promises for innovation in the region, and for society as a whole.

“At MIT, it is our duty to bring transformative innovation to the world,” MIT President L. Rafael Reif said, opening the event for a capacity crowd of entrepreneurs, business leaders, investors, and MIT community members gathered at The Engine’s new headquarters at 501 Massachusetts Avenue, in Cambridge, Massachusetts.

Announced Wednesday, The Engine is a startup accelerator and innovation hub that will support 60 locally based companies at any one time, with a focus on “tough” technologies — breakthrough ideas that require time to commercialize — in a range of sectors including biotechnology, robotics, manufacturing, medical devices, and energy.

“What truly sets The Engine apart,” Reif added, “is its emphasis on impact. In assessing candidate companies, it will prioritize breakthrough answers to big questions and to big problems, over early profits.”

Reif penned an op-ed in the Boston Globe discussing The Engine’s mission to solve the world’s most pressing challenges. 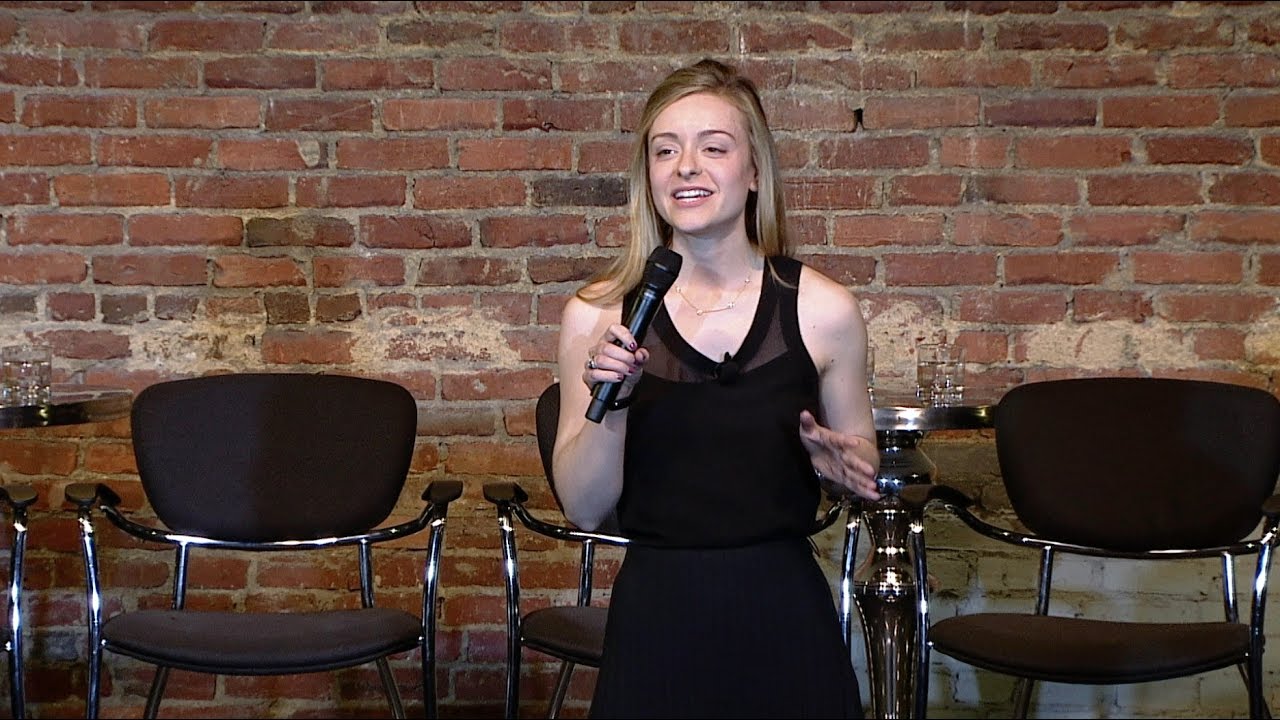 The Engine’s support for entrepreneurs will include a “distinctive package of resources,” Reif said: “patient” capital, affordable local space, access to highly specialized equipment, streamlined business services, and expertise. The Engine will also connect entrepreneurs to MIT alumni, like-minded entrepreneurs, and major corporations in the region and beyond.

The Engine seeks to raise $150 million for a first investment fund; MIT will invest $25 million in that fund as a limited partner. The Engine will also offer 26,000 square feet at its headquarters, with aims to make available to entrepreneurs more than 200,000 square feet in Kendall Square and nearby neighborhoods. The new initiative also includes The Engine Room, an online marketplace that will enable entrepreneurs to use or rent specialized resources from each other and from MIT, including office and conference spaces, clean rooms, and other facilities and equipment.

“Innovators are finding it very difficult to secure funding, space, equipment, expertise, and networks to fully develop their technologies. Many of them are working on solutions to humanity’s most pressing problems, so if they cannot get their ideas to market, society loses as well,” he said. “The Engine will help deliver important answers for addressing such intractable problems — answers that may otherwise never leave the lab.”

In closing the event, MIT Executive Vice President and Treasurer Israel Ruiz, who led the launch of The Engine, said MIT will begin recruiting knowledgeable leadership, among other tasks, to get The Engine running efficiently by next spring. “We want to make sure that what we have is an engine that runs for the long run,” he said.

In a discussion moderated by MIT Media Lab Director Joi Ito, panelists discussed how the initiative could benefit their work and the region, and offered advice on fine-tuning The Engine.

Venture capitalist Antonio Rodriguez, a general partner at Matrix Partners, said that giving startups resources to validate their transformative — and sometimes risky — technologies early on could encourage more venture capitalists to invest. Moreover, he added, The Engine could help keep startups in Boston.

Venture capitalist firms are like hammers seeking nails that sometimes aren’t there, Rodriguez said: “I think the thing an organization like this can do is make sure those nails are there to be hit … across industries that are going to solve these big, hard problems.”

Jay Bradner, president of the Novartis Institutes for BioMedical Research, said Novartis could be a “powerful neighbor” for The Engine, noting some of Novartis’ previous collaborations with MIT in developing new therapeutics. Addressing MIT leadership, he said, “We really need to organize around how we plan to use this sandbox together.”

Echoing Bradner’s sentiments about stronger collaboration was Sue Siegel, CEO of GE Ventures, who said her firm could find ways to potentially support The Engine’s startups with expertise, capital, and methods of distribution. “It’s a remarkable overlap in terms of the innovation possibilities that we can have with MIT and The Engine,” she said.

Panelist Leslie Dewan ’06, PhD ’13, founder and CEO of MIT spinout Transatomic Power, which is developing an advanced reactor that generates clean and low-cost nuclear power, said The Engine could help bring related startups to Boston, where few are located. “One of the things I’m so excited about … is the prospect of having more peers,” she said. “Cambridge is uniquely positioned to be a hub of advanced nuclear reactor development.”

Institute Professor Phillip Sharp, co-founder of Biogen, which launched in Kendall Square in the 1970s, told MIT leadership to “take on the challenge of being the meeting place, of bringing the entrepreneurs, the venture capitalists, the students, the postdocs together in a form where you can talk about entrepreneurship, creativity, finance, all the other issues. That’s very hard to do on a campus. But it is something The Engine could use in creating the future.”

Panelist Guru Banavar, vice president and chief science officer for cognitive computing at IBM, also spoke about the potential for collaboration between his company and The Engine.

Six startups founded by MIT students, alumni, and professors delivered brief presentations about their businesses, which could benefit from The Engine. They were: Raptor Maps, Spyce, Confer Health, Humon, Cambridge Mobile Telematics, and Transatomic Power.

Nikhil Vadhavkar, co-founder and CEO of Raptor Maps, told MIT News that The Engine’s value is bringing MIT’s “financial support and intellectual capital” to young startups. Raptor Maps did most of its research and development out of the co-founders’ dorm room. “So having a place like this would have been remarkable early on,” Vadhavkar said.

In a video announcing The Engine Room, Natalya Brikner PhD ’15, co-founder and CEO of MIT spinout Accion Systems, which is developing molten-salt thrusters for satellites, praised the online marketplace, which they plan to use. “We’re excited to have a resource like this going forward,” she said. “Because as we grow our product line, we’re going to venture into new areas of R&D. We’re only going to need more access to tools, and prototyping, and experts.”

David Garber, a first-year student in the MIT Sloan School of Management, hopes to launch a company based on a transformative technology, while in school. After the event, he told MIT News that the most exciting part of The Engine for him was the concept of patient capital. “It’s great to have investors and the Institute willing to take a risk on a technology that may not [yet] have a market [or] business viability, but could be something transformative,” he said.