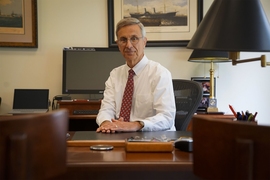 Tony Sharon, who has served as deputy executive vice president since 2013, will retire from MIT at the end of the current calendar year, concluding 20 years of service to the Institute.

Executive Vice President and Treasurer Israel Ruiz announced the news today in a letter to MIT faculty and staff.

“Tony has been one of my closest and most trusted advisors,” Ruiz wrote. “He has created bridges and strengthened relationships across MIT, while partnering with me to lead our senior management team and oversee the operations of MIT’s administrative areas.”

“Tony has also been pivotal in attracting talent to a number of important leadership positions,” Ruiz added. “He has played a key role in building and mentoring the next generation of administrative leaders for the Institute.”

Sharon led the execution of the MIT2030 framework for capital projects, helping to balance new construction with renewal of older buildings and developing a staff to maintain these buildings for future generations of faculty and students. He helped guide an unprecedented period of capital renewal on campus, Ruiz noted in his letter, addressing deferred maintenance projects and advancing new dormitory construction for both undergraduate and graduate students.

“Every day, Tony Sharon proves it is somehow possible to combine a humble, gentle, easy-going manner with military precision and uncanny efficiency,” says President L. Rafael Reif. “As he has demonstrated over and over at MIT, Tony has a remarkable ability to get big things done while making everyone around him feel that they are vital to the team’s success. For his practical accomplishments and his personal example, we will always be in his debt.”

Sharon joined MIT in 1999, spending his first 14 years at Lincoln Laboratory, a federally funded R&D center managed by MIT for the Department of Defense. His first role at MIT was as research group leader of the 70-person Advanced Satellite Communications Engineering and Operations Group, which develops and tests satellite communications systems.

In 2003, Sharon became Lincoln Laboratory’s executive officer, with responsibility for strategic planning for internal operations and investments. From 2006 to 2013, he was Lincoln Laboratory’s assistant director for operations, serving as the chief operating officer for a facility with 3,600 employees on a 75-acre campus with 1.7 million square feet of research, fabrication, test, and evaluation facilities.

“Tony was a quick study when he arrived on campus in 2013,” Provost Martin Schmidt says. “He embraced MIT’s distinctive culture, figuring out how his work could complement and enhance that of MIT’s schools and academic departments. He was remarkably effective in these interactions, and I will miss having him as a colleague in these efforts.”

“Someone asked how long I have been at MIT,” Sharon says. “When I answered ‘20 years,’ they remarked that I was fortunate to have had two professions — one in the Air Force, the second at MIT. I am deeply grateful that MIT gave me the opportunity to have two careers.”

Ruiz’s letter to faculty and staff noted that over the coming months, he will work to distribute Sharon’s portfolio of responsibilities across the organization.

The Engine expands, responding to rapid growth of “tough tech”