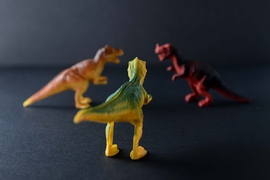 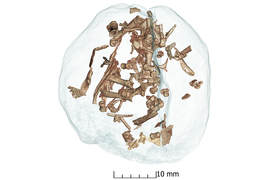 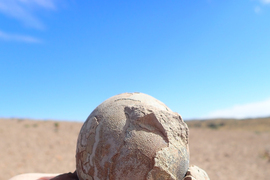 ↓ Download Image
Caption: Paleontologists in Argentina unearthed a community of dinosaurs in Patagonia, including a nest of chicken-sized eggs, such as the one shown here.
Credits: Credit: Roger Smith

Caption:
Paleontologists in Argentina unearthed a community of dinosaurs in Patagonia, including a nest of chicken-sized eggs, such as the one shown here.
Credits:
Credit: Roger Smith

To borrow a line from the movie “Jurassic Park:” Dinosaurs do move in herds. And a new study shows that the prehistoric creatures lived in herds much earlier than previously thought.

In a paper appearing today in Scientific Reports, researchers from MIT, Argentina, and South Africa detail their discovery of an exceptionally preserved group of early dinosaurs that shows signs of complex herd behavior as early as 193 million years ago — 40 million years earlier than other records of dinosaur herding.

Since 2013, members of the team have excavated more than 100 dinosaur eggs (about the size of chicken eggs) and the partial skeletons of 80 juvenile and adult dinosaurs from a rich fossil bed in southern Patagonia.

Using X-ray tomography imaging, they were able to examine the eggs’ contents without breaking them apart, and discovered preserved embryos within, which they used to confirm that the fossils were all members of Mussaurus patagonicus — a plant-eating dinosaur that lived in the early Jurassic period and is classified as a sauropodomorph, a predecessor of the massive, long-necked sauropods that later roamed the Earth.

Surprisingly, the researchers observed that the fossils were grouped by age: Dinosaur eggs and hatchlings were found in one area, while skeletons of juveniles were grouped in a nearby location. Meanwhile, remains of adult dinosaurs were found alone or in pairs throughout the field site. 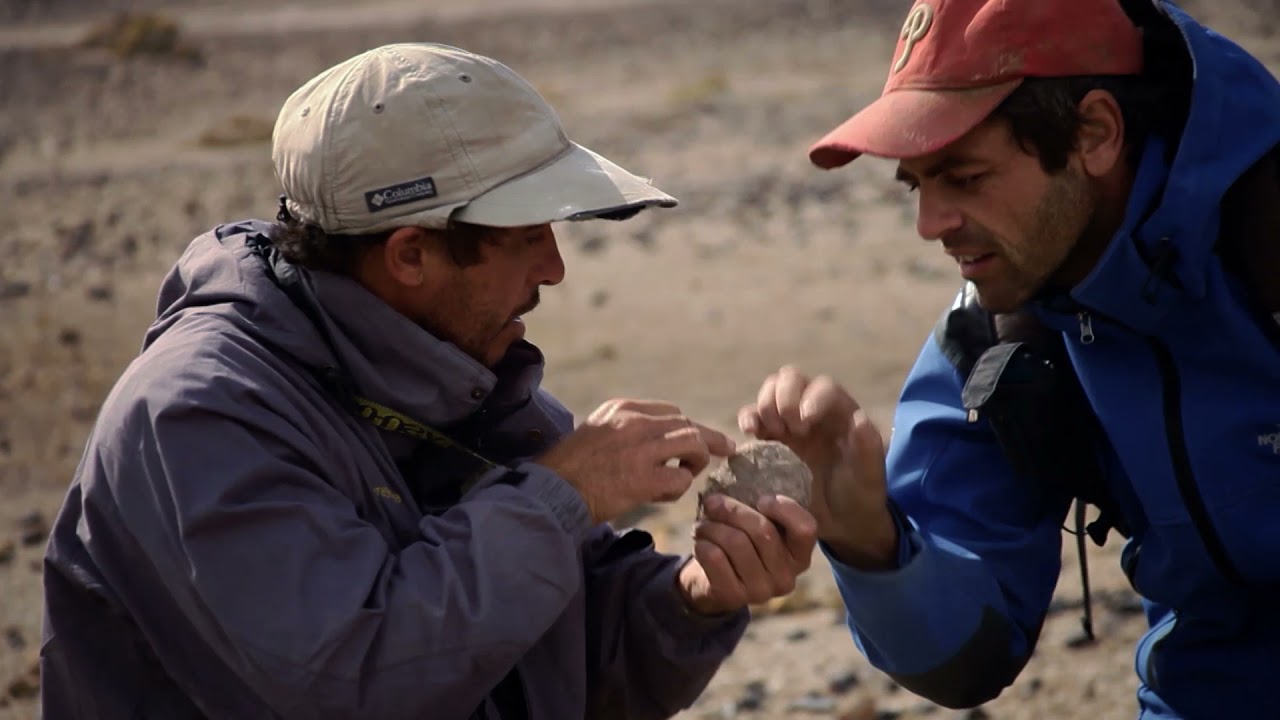 This “age segregation,” the researchers believe, is a strong sign of a complex, herd-like social structure. The dinosaurs likely worked as a community, laying their eggs in a common nesting ground. Juveniles congregated in “schools,” while adults roamed and foraged for the herd.

“This may mean that the young were not following their parents in a small family structure,” says team member Jahandar Ramezani, a research scientist in MIT’s Department of Earth, Atmospheric and Planetary Sciences. “There’s a larger community structure, where adults shared and took part in raising the whole community.”

Ramezani dated ancient sediments among the fossils and determined that the dinosaur herd dates back to around 193 million years ago, during the early Jurassic period. The team’s results represent the earliest evidence of social herding among dinosaurs.

Living in herds may have given Mussaurus and other social sauropodomorphs an evolutionary advantage. These early dinosaurs originated in the late Triassic, shortly before an extinction event wiped out many other animals. For whatever reason, sauropodomorphs held on and eventually dominated the terrestrial ecosystem in the early Jurassic.

“We’ve now observed and documented this earliest social behavior in dinosaurs,” Ramezani says. “This raises the question now of whether living in a herd may have had a major role in dinosaurs’ early evolutionary success. This gives us some clues to how dinosaurs evolved.”

Since 2013, paleontologists on the team have worked in the Laguna Colorada Formation, a site in southern Patagonia that is known for bearing fossils of early sauropodomorphs. When scientists first discovered fossils within this formation in the 1970s, they named them Mussaurus for “mouse lizard,” as they assumed the skeletons were of miniature dinosaurs.

Only much later did scientists, including members of the Argentinian team, discover bigger skeletons, indicating Mussaurus adults were much larger than their rodent namesakes. The name stuck, however, and the team has continued to unearth a rich collection of Mussaurus fossils from a small, square kilometer of the formation.

The fossils they have identified so far were found in three sedimentary layers spaced close together, indicating that the region may have been a common breeding ground where the dinosaurs returned regularly, perhaps to take advantage of favorable seasonal conditions.

Among the fossils they uncovered, the team discovered a group of 11 articulated juvenile skeletons, intertwined and overlapping each other, as if they had been suddenly thrown together. In fact, judging from the remarkably preserved nature of the entire collection, the team believes this particular herd of Mussaurus died “synchronously,” perhaps quickly buried by sediments.

Based on evidence of ancient flora in the nearby outcrops, the Laguna Colorada Formation has long been assumed to be relatively old on the dinosaur timescale. The team wondered: Could these dinosaurs have been herding from early on?

“People already knew that in the late Jurassic and Cretaceous, the large herbivore dinosaurs exhibited social behavior — they lived in herds and had nesting spots,” Ramezani says. “But the question has always been, when was the earliest time for such herding behavior?”

To find out, Diego Pol, a paleontologist at the Egidio Feruglio Paleontological Museum in Argentina who led the study, looked for samples of volcanic ash among the fossils to send to Ramezani’s lab at MIT. Volcanic ash can contain zircon — mineral grains contaning uranium and lead, the isotopic ratios of which Ramezani can precisely measure. Based on uranium’s half-life, or the time it takes for half of the element to decay into lead, he can calculate the age of the zircon and the ash in which it was found. Ramezani successfully identified zircons in two ash samples, all of which he dated to around 193 million years old.

Since the volcanic ash was found in the same sediment layers as the fossils, Ramezani’s analyses strongly suggest that the dinosaurs were buried at the same time the ash was deposited. A likely scenario may have involved drought and wind-blown dust that starved and rapidly buried the herd, while ash from a distant eruption happened to drift over and, luckily for science, deposit zircons in the sediments.

Taken together, the team’s results show that Mussaurus and possibly other dinosaurs evolved to live in complex social herds as early as 193 million years ago, around the dawn of the Jurassic period.

“Evidence suggests that Mussaurus optimized foraging potentials during the early Jurassic via age-based social partitioning — neonates, juveniles, and adults apparently foraged, and perished, in age-based groups,” says Raymond Rogers, a professor of geology at Macalester College, who was not involved in the study. “This type of gregarious behavior is common today in large terrestrial herbivores.  It is amazing to see clear evidence of the same phenomenon in this early dinosaur species.”

Scientists suspect that two other types of early dinosaurs — Massospondylus from South Africa and Lufengosaurus from China — also lived in herds around the same time, although the dating for these dinosaurs has been less precise. If multiple separate lines of dinosaurs lived in herds, the researchers believe the social behavior may have evolved earlier, perhaps as far back as their common ancestor, in the late Triassic.

“Now we know herding was going on 193 million years ago,” Ramezani says. “This is the earliest confirmed evidence of gregarious behavior in dinosaurs. But paleontological understanding says, if you find social behavior in this type of dinosaur at this time, it must have originated earlier.”

This research was supported, in part, by National Science Foundation in the U.S. and the National Scientific and Technical Research Council of Argentina.

Paper: “Earliest evidence of herd-living and age segregation amongst dinosaurs”

HuffPost reporter Mary Papenfuss writes that a team of archeologists and scientists, including Research Scientist Jahandar Ramezani, have uncovered evidence of social behaviors in dinosaurs. “The bones were segregated by age, with eggs in a common nesting ground,” writes Papenfuss. “Juveniles likely were left in ‘schools’ while adults foraged.”

Research scientist Jahandar Ramezani speaks with Scientific American reporter Christopher Intagliata about his new study that provides evidence early dinosaurs exhibited herding behavior. “This is a critical time in the evolution of dinosaurs. This is pretty early on,” says Ramezani. “So the idea is: this type of behavior, this social behavior, may have actually contributed to the evolutionary success of dinosaurs.”

Researchers from MIT and other institutions have uncovered evidence that early dinosaurs may have lived in social herds, reports Kate Baggaley for Popular Science. “People have known for a long time that the more advanced dinosaurs, the ones that lived in the late Jurassic and Cretaceous, especially the large sauropods…moved and lived in herds,” explains research scientist Jahandar Ramezani. “But the question has always been, when did this behavior start?”

Study sheds light on the evolution of the earliest dinosaurs

An extinction without warning