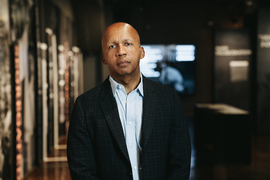 Bryan Stevenson, a civil rights lawyer acclaimed for his work confronting bias against the poor and people of color in the U.S. justice system, will deliver the address at MIT’s 2021 Commencement exercises on Friday, June 4.

Stevenson is the founder and executive director of the Equal Justice Initiative, a human rights organization in Montgomery, Alabama, which has won legal challenges eliminating excessive and unfair sentencing, exonerating innocent death row prisoners, confronting abuse of the incarcerated and the mentally ill, and aiding children prosecuted as adults.

Stevenson has argued and won multiple cases at the United States Supreme Court, including a 2019 ruling protecting condemned prisoners who suffer from dementia and a landmark 2012 ruling that banned mandatory life-imprisonment-without-parole sentences for all children 17 or younger. He and his staff have won reversals, relief, or release from prison for over 135 wrongly condemned prisoners on death row and won relief for hundreds of others wrongly convicted or unfairly sentenced.

“At MIT, our mission calls on us to work for the betterment of humankind. Revealing and overturning societal injustice and inspiring others to join in this essential human struggle has been Professor Stevenson’s life’s work,” says MIT President L. Rafael Reif. “At a moment of such great upheaval, injustice, and suffering in our society, I cannot imagine a more important and motivating voice to address our graduates and our larger community.”

“As we face a future filled with uncertainty, now is the time for a renewed commitment to the idea that our own humanity depends on the humanity of everyone,” says Stevenson. “I look forward to speaking to the Class of 2021 as they prepare to share with the world their own signature blends of the innovation, creativity, and compassion that are celebrated at MIT.”

Many of Stevenson’s achievements are described in his award-winning memoir, “Just Mercy,” which was published in 2014 and adapted into a 2019 movie of the same name. The story is centered on the case of Walter McMillian, a Black man on death row for a murder he didn’t commit. In their years-long fight to have McMillian exonerated, Stevenson and his colleagues uncovered far-reaching systemic bias in the criminal justice system. This case and others galvanized their mission to combat mass incarceration and extreme punishment in the United States.

Stevenson has represented not only the unjustly accused but also people who have committed terrible crimes and yet struggled to recover and find redemption. As he writes in “Just Mercy,” this work “has taught me some basic and humbling truths, including this vital lesson: Each of us is more than the worst thing we’ve ever done.”

In addition to litigation, Stevenson and his team at the Equal Justice Initiative conduct other racial justice and public education projects, and provide research and recommendations for policymakers. In 2018 they established the National Memorial for Peace and Justice, which commemorates the Black victims of lynching in the United States, and the associated Legacy Museum, chronicling the connections from slavery to mass incarceration.

“Stevenson’s National Memorial for Peace and Justice, which I have visited, is a singularly important addition to our national landscape of monuments. It manages to honor the lives lost to lynching, while also capturing the horrors of their slaughter,” says Melissa Nobles, the Kenan Sahin Dean of the School of Humanities, Arts, and Social Sciences, and professor of political science at MIT. Nobles’ research and teaching have focused on the comparative study of racial and ethnic politics, and issues of retrospective justice. Her current research centers on constructing a database of racial killings in the American South from 1930 to 1954.

Stevenson received his bachelor’s degree from Eastern University in 1981, and graduated from Harvard University in 1985 with both a master’s in public policy from the Kennedy School of Government and a JD from the School of Law. He then joined the Southern Center for Human Rights in Atlanta, working out of its chapter in Montgomery, Alabama. He founded the Equal Justice Initiative in 1989 and has been on the faculty of the New York University School of Law since 1998.

Stevenson’s work has won him numerous awards, including the prestigious MacArthur Foundation fellowship; the ABA Medal, the American Bar Association’s highest honor; the National Medal of Liberty from the American Civil Liberties Union after he was nominated by United States Supreme Court Justice John Stevens; the Public Interest Lawyer of the Year by the National Association of Public Interest Lawyers; and the Olaf Palme Prize in Stockholm, for international human rights.

“I’m delighted to hear that Bryan Stevenson will be the commencement speaker for our class,” says Kofi Blake, president of MIT’s Class of 2021. “At a time where our country continues to recognize and confront its systemic racial disparities, I believe Mr. Stevenson will provide a much needed perspective on tackling these issues. Through his work, he has exemplified what it means to be an anti-racist. I’m confident that his words will inspire the MIT Class of 2021 to think critically about racial equity and injustice in all our future endeavors.”

“Bryan Stevenson is an outstanding choice for this year’s commencement,” says Undergraduate Association President Danielle Geathers. “As a trailblazer at the intersection of racial reckoning and criminal justice reform, Stevenson is one of the most compelling and relevant choices for commencement speaker for this year. As we, at MIT, confront our own role in perpetuating systemic racism, I expect Bryan Stevenson’s words will inspire many at the Institute to dedicate their talents to fighting injustice.”

“I was excited to learn that Bryan Stevenson will be our Commencement speaker because graduate students expressed a desire to hear from someone who has faced oppression and made a real difference in the world. I think we will learn a lot from his address,” says Graduate Student Council President Madeleine Sutherland.