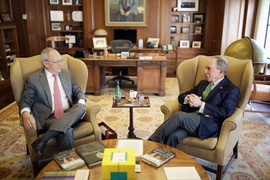 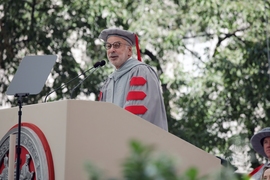 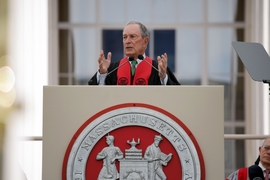 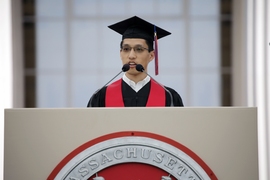 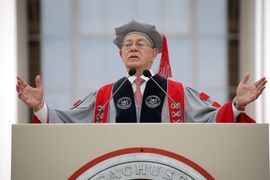 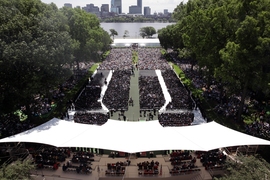 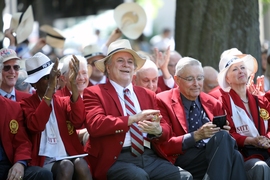 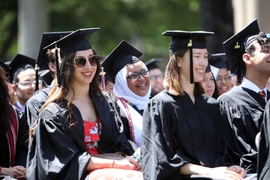 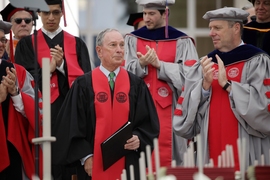 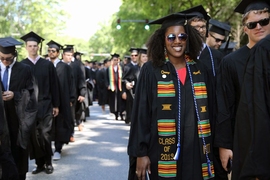 Caption:
Michael Bloomberg, entrepreneur, philanthropist, and three-term New York City mayor, addressed the Class of 2019 during MIT’s commencement ceremony on June 7. ““All of you are part of an amazing institution that has proven — time and time again —that human knowledge and achievement is limitless,” he said.
Credits:
Image: Dominick Reuter

Caption:
Peter Su, president of the MIT Graduate Student Council, emphasized the great variety of people and programs that make up MIT. “If we’re all going to truly build a better world, we’ll need that diversity of perspectives, and the willingness and ability to work together across disciplines,” he told the Class of 2019.
Credits:
Image: Dominick Reuter

Caption:
In his charge to the Class of 2019, MIT President L. Rafael Reif told graduates: “Join the world. Find your calling. Solve the unsolvable. Invent the future. Take the high road. Shoot for the Moon!”
Credits:
Image: Dominick Reuter

Caption:
The graduating class of 1969 sported the signature red jackets worn by those who have celebrated their 50th reunion.
Credits:
Image: Jake Belcher

In his Commencement address to the MIT graduating Class of 2019, entrepreneur, engineer, and former New York mayor Michael Bloomberg announced a landmark pledge to combat climate change: a $500 million investment in a program called Beyond Carbon.

Referring to the 50th anniversary this year of humankind’s first landing on the moon — made possible in part through an MIT-developed guidance system — Bloomberg said his new initiative aims for a total shift to clean energy sources “as expeditiously as possible” and amounts to a kind of moonshot for today’s generation. “I hope that you will all become part of it,” he told the MIT audience.

“All of you are part of an amazing institution that has proven — time and time again —that human knowledge and achievement is limitless. In fact, this is the place that proved moonshots are worth taking,” he said.

Bloomberg added that “I hope you will carry with you MIT’s tradition of taking — and making — moonshots. Be ambitious in every facet of your life. … Because just trying to make the impossible possible can lead to achievements you never dreamed of. And sometimes, you actually do land on the moon.”

He delivered his address under a cloudless sky in MIT’s Killian Court, where this week 1,086 undergraduate students and 1,368 graduate students received their degrees, at the Doctoral Ceremony on June 6 and the Commencement exercises on June 7.

“The challenge that lies before you — stopping climate change — is unlike any other ever faced by humankind,” Bloomberg said. “The stakes could not be higher.”

“First, we will push states and utilities to phase out every last U.S. coal-fired power plant by 2030 — just 11 years from now.” He stressed that he knows this is possible, because the country is already more than halfway there, with 289 coal plants closed since 2011, when he joined with the Sierra Club for an initiative called Beyond Coal. “A decade ago no one would have believed that we could take on the coal industry and close half of all U.S. plants. But we have,” he said.

In places where jobs are being lost, Beyond Carbon intends to support local organizations working to spur economic growth and retrain workers for jobs in growing industries, Bloomberg said.

The initiative’s second component is to stop the construction of new gas plants. “By the time they are built, they will already be out of date — because renewable energy will be cheaper,” he said, noting that in many parts of the country this is already the case. “We don’t want to replace one fossil fuel with another. We want to build a clean energy economy — and we will push more states to do that,” he said.

Third, he said, “we will support our most powerful allies — governors, mayors, and legislators — in their pursuit of ambitious policies and laws, and we will empower the grassroots army of activists and environmental groups that are currently driving progress state-by-state.”

And finally, because climate change is currently a political problem, not a scientific or technological one, Bloomerg said, the initiative will be engaged in elections across the country. “At least for the foreseeable future, winning the battle against climate change will depend less on scientific advancement and more on political activism. … Our message to elected officials will be simple: Face reality on climate change, or face the music on election day,” he said.

While many people think of tackling climate change as something that will require personal and financial sacrifice, Bloomberg took the opposite view: “We intend to succeed not by sacrificing things we need, but by investing in things we want: more good jobs, cleaner air and water, cheaper power, more transportation options, and less-congested roads.”

Bloomberg said that “I believe we will succeed again — but only if one thing happens and that is: You have to help lead the way by raising your voices, by joining an advocacy group, by knocking on doors, by calling your elected officials, by voting, and getting your friends and family to join you.”

Following Bloomberg’s address, Peter Su, president of the MIT Graduate Student Council, gave remarks emphasizing the great variety of people and programs embodied in MIT. He told the graduates that as they go about their new careers, “if we’re all going to truly build a better world, we’ll need that diversity of perspectives, and the willingness and ability to work together across disciplines.”

Su urged the graduates to take time to focus not just on the technical and business aspects of their careers or the projects they are working on, but to “consider also the social and ethical implications, and how your fellow human beings, as both individuals and as society, will react and respond.”

Trevor McMichael, president of the Class of 2019, also addressed the graduates, urging them to keep in touch with each other as they began their new lives after graduation. “If someone is important to you, do not let them go. Call them. Plan to meet them. Go the extra mile for them. Because if they helped you through this wild journey called MIT, that is a person worth holding onto,” he said.

MIT President L. Rafael Reif, in his charge to the graduating class, echoed the importance of taking action to make the world better. “After you depart for your new destinations, I want to ask you to hack the world — until you make the world a little more like MIT: More daring and more passionate. More rigorous, inventive and ambitious. More humble, more respectful, more generous, more kind. And because the people of MIT also like to fix things that are broken, as you strive to hack the world, please try to heal the world, too.”

Reif too alluded to the Apollo 11 moon landing and MIT’s role in it. Referring to the alumni present from MIT’s class of 1969, who were sporting the signature red jackets worn by graduates who have celebrated their 50th reunion, he said, “I believe our 1969 graduates might all agree on the most important wisdom we gained from Apollo: It was the sudden, intense understanding of our shared humanity and of the preciousness and fragility of our blue planet. Fifty years later, those lessons feel more urgent than ever. And I believe that, as members of the great global family of MIT, we must do everything in our power to help make a better world.”

In that spirit, he said, “So now, go out there. Join the world. Find your calling. Solve the unsolvable. Invent the future. Take the high road. Shoot for the moon!”

Boston Globe reporter Alison Kuznitz writes that during MIT’s Commencement, former mayor Michael Bloomberg detailed plans for a new initiative aimed at tackling climate change. “This has gone from a scientific challenge to a political problem,” said Bloomberg, “and it’s time for everyone to recognize that climate change is the challenge of our time.”

Boston Business Journal reporter Hilary Burns spotlights the diligent preparation that goes into the reading of graduates’ names and ensuring that MIT’s Commencement ceremony runs smoothly. “We practice. It can be too slow or too fast,” explains Sarah Gallop, one of eight readers. “There is a magic sweet spot in the pace.”

President L. Rafael Reif’s charge to the Class of 2019

Tim Cook to MIT grads: “How will you serve humanity?”