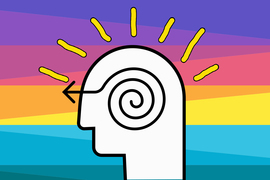 Caption:
“As we age, it's harder to have a get-up-and-go attitude toward things,” says study author Ann Graybiel.
Credits:
Image: Christine Daniloff, MIT

As people age, they often lose their motivation to learn new things or engage in everyday activities. In a study of mice, MIT neuroscientists have now identified a brain circuit that is critical for maintaining this kind of motivation.

This circuit is particularly important for learning to make decisions that require evaluating the cost and reward that come with a particular action. The researchers showed that they could boost older mice’s motivation to engage in this type of learning by reactivating this circuit, and they could also decrease motivation by suppressing the circuit.

“As we age, it’s harder to have a get-up-and-go attitude toward things,” says Ann Graybiel, an Institute Professor at MIT and member of the McGovern Institute for Brain Research. “This get-up-and-go, or engagement, is important for our social well-being and for learning — it’s tough to learn if you aren’t attending and engaged.”

The striatum is part of the basal ganglia — a collection of brain centers linked to habit formation, control of voluntary movement, emotion, and addiction. For several decades, Graybiel’s lab has been studying clusters of cells called striosomes, which are distributed throughout the striatum. Graybiel discovered striosomes many years ago, but their function had remained mysterious, in part because they are so small and deep within the brain that it is difficult to image them with functional magnetic resonance imaging (fMRI).

In recent years, Friedman, Graybiel, and colleagues including MIT research fellow Ken-ichi Amemori have discovered that striosomes play an important role in a type of decision-making known as approach-avoidance conflict. These decisions involve choosing whether to take the good with the bad — or to avoid both — when given options that have both positive and negative elements. An example of this kind of decision is having to choose whether to take a job that pays more but forces a move away from family and friends. Such decisions often provoke great anxiety.

In a related study, Graybiel’s lab found that striosomes connect to cells of the substantia nigra, one of the brain’s major dopamine-producing centers. These studies led the researchers to hypothesize that striosomes may be acting as a gatekeeper that absorbs sensory and emotional information coming from the cortex and integrates it to produce a decision on how to act. These actions can then be invigorated by the dopamine-producing cells.

The researchers later discovered that chronic stress has a major impact on this circuit and on this kind of emotional decision-making. In a 2017 study performed in rats and mice, they showed that stressed animals were far more likely to choose high-risk, high-payoff options, but that they could block this effect by manipulating the circuit.

During the experiments, the mice heard two different tones, one of which was accompanied by a reward (sugar water), and another that was paired with a mildly aversive stimulus (bright light). The mice gradually learned that if they licked a spout more when they heard the first tone, they would get more of the sugar water, and if they licked less during the second, the light would not be as bright.

Learning to perform this kind of task requires assigning value to each cost and each reward. The researchers found that as the mice learned the task, striosomes showed higher activity than other parts of the striatum, and that this activity correlated with the mice’s behavioral responses to both of the tones. This suggests that striosomes could be critical for assigning subjective value to a particular outcome.

“In order to survive, in order to do whatever you are doing, you constantly need to be able to learn. You need to learn what is good for you, and what is bad for you,” Friedman says.

“A person, or this case a mouse, may value a reward so highly that the risk of experiencing a possible cost is overwhelmed, while another may wish to avoid the cost to the exclusion of all rewards. And these may result in reward-driven learning in some and cost-driven learning in others,” Hueske says.

The researchers found that inhibitory neurons that relay signals from the prefrontal cortex help striosomes to enhance their signal-to-noise ratio, which helps to generate the strong signals that are seen when the mice evaluate a high-cost or high-reward option.

Next, the researchers found that in older mice (between 13 and 21 months, roughly equivalent to people in their 60s and older), the mice’s engagement in learning this type of cost-benefit analysis went down. At the same time, their striosomal activity declined compared to that of younger mice. The researchers found a similar loss of motivation in a mouse model of Huntington’s disease, a neurodegenerative disorder that affects the striatum and its striosomes.

When the researchers used genetically targeted drugs to boost activity in the striosomes, they found that the mice became more engaged in performance of the task. Conversely, suppressing striosomal activity led to disengagement.

In addition to normal age-related decline, many mental health disorders can skew the ability to evaluate the costs and rewards of an action, from anxiety and depression to conditions such as PTSD. For example, a depressed person may undervalue potentially rewarding experiences, while someone suffering from addiction may overvalue drugs but undervalue things like their job or their family.

The researchers are now working on possible drug treatments that could stimulate this circuit, and they suggest that training patients to enhance activity in this circuit through biofeedback could offer another potential way to improve their cost-benefit evaluations.

“If you could pinpoint a mechanism which is underlying the subjective evaluation of reward and cost, and use a modern technique that could manipulate it, either psychiatrically or with biofeedback, patients may be able to activate their circuits correctly,” Friedman says.

Neuroscientists get at the roots of pessimism