How many votes will be counted after election night? 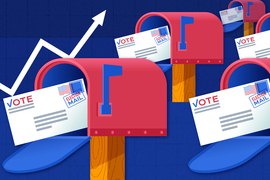 ↓ Download Image
Caption: New research looks at how post-Election Day ballot counts have affected the outcomes of past elections. MIT Professor Charles Stewart and colleagues quantify this “blue shift” or “red shift” effect by state, analyze its causes, and show why the 2020 election might be decided after Nov. 3.
Credits: Image: MIT News

Caption:
New research looks at how post-Election Day ballot counts have affected the outcomes of past elections. MIT Professor Charles Stewart and colleagues quantify this “blue shift” or “red shift” effect by state, analyze its causes, and show why the 2020 election might be decided after Nov. 3.
Credits:
Image: MIT News

This is part 1 of a two-part MIT News series on voting research and the 2020 election. Part 2 focuses on mail-in “lost votes.”

When you watch election returns on Nov. 3, keep this in mind: In some U.S. states, it will take days to count all the ballots, and the winner might only be clear later, rather than sooner.

A study co-authored by an MIT political scientist quantifies this effect by state, analyzes its causes, and shows why the 2020 election might indeed be decided after Nov. 3.

“It’s one of the reasons people are bracing for a bit of a rocky ride after the polls close,” says Charles Stewart, a professor in MIT’s Department of Political Science and co-author of a paper detailing the study’s results.

Moreover, the Covid-19 pandemic seems likely to generate more absentee voting than ever. These factors have led many political commentators to speculate that President Donald Trump, who has been mostly critical of mail-in voting, might verbally claim victory on election night despite an unfinished vote count. This may especially be relevant to Pennsylvania and Michigan, which have little or no advance counting of mail-in ballots.

However, Stewart notes, we do not know what will unfold. Fully 42 states start counting absentee ballots before Election Day, and if voters return mail-in ballots unusually quickly, some absentee vote counts might wrap up routinely. In that case, “There could be more [issues] with Election Day voting than mail voting,” Stewart says.

Additionally, Stewart says, if Democrats are particularly focused on sending in absentee ballots early, “We could have a red shift in 2020 in some of these states, if Democratic ballots [have] already been scanned and preloaded, and if Republican ballots are the last ones, which will get counted on Wednesday or Thursday.”

The paper, “Explaining the Blue Shift in Election Canvassing,” is co-authored by Stewart, the Kenan Sahin Distinguished Professor of Political Science at MIT, and Edward Foley, the Charles W. Ebersold and Florence Whitcomb Ebersold Chair in Constitutional Law, and director of the election law program at Moritz College of Law at Ohio State University. It appeared this summer in the Journal of Political Institutions and Political Economy.

Why more votes are counted later …

To conduct the research, Foley and Stewart examined all presidential elections since 1948. First, to gain an overall sense of the size of the post-Election Day vote count, they compared the vote tabulations appearing in The New York Times on the Thursday after every Election Day with the eventual vote totals (using Dave Leip’s Election Atlas as the source for final results).

From 1948 through 1956, the number of votes counted after Election Day was higher than it is now, above 10 percent, which the researchers attribute to the slower forms of communication (and thus vote reporting) of the time. That number generally stayed under 5 percent for a few decades but ticked up in 1992 and again starting in 2004.

Two main factors likely account for this growth: greater use of provisional ballots and more mail-in voting (also known as absentee voting). In the first case, the Help America Vote Act (HAVA), passed by the U.S. Congress in 2002, modernized voting equipment and required all states to issue provisional ballots to voters.

At the same time, voting by mail has grown in popularity. Using the federal Election Assistance Commission’s Election Administration and Voting Survey (EAVS) and U.S. Census Bureau data, Foley and Stewart conclude in their paper that “there is a correlation between the number of provisional and mail ballots that must be processed by a state’s election officials and the number of overtime votes” — that is, those counted after Election Day.

“The reforms after the 2000 election routinized some of these dynamics,” Stewart says, while state-level changes “removed [the need for] excuses for voting by mail.”

… and why has the shift been blue?

Still, if an increasing number of votes are counted after Election Day, why has that boosted the Democratic Party candidate? The post-Election Day vote count generated a 0.12 percentage point shift in the national popular vote in favor of John Kerry in 2004, a 0.35 point shift for Barack Obama in 2008, and a 0.39 point shift for Obama in 2012, before Clinton’s 0.30 point gain in 2016.

Digging into state-level data, the scholars find the same pattern. In North Carolina, which has the most extensive public data about provisional ballots of any state, 39 percent of voters casting a provisional ballot in 2016 were Democrats, although just 34.6 percent of the state electorate consisted of Democrats.

Stewart suggests another reason, though, which stems from the campaign side of politics.

“Starting in 2008, I think something else happened,” he says. “The Obama campaign recognized the strategic opportunity in some states to lock down the Democratic vote early, so that the election-day get-out-the-vote effort could be more [focused] and less costly. And ever since then Democratic [Party] strategists, more so than Republican [Party] strategists, have looked to mail balloting as a way of getting their votes in.”

Certainly the blue shift has not been constant. Nixon enjoyed a red shift of 0.20 percentage points in 1960, while narrowly losing to John F. Kennedy, and then a smaller red shift while winning in 1968.

Eyes on the Midwest

As Foley and Stewart also detail in the paper, states vary widely in how quickly they process votes. Florida starts counting absentee votes 22 days before the election. Conversely, Pennsylvania and Michigan, key states Trump won narrowly in 2016, have just implemented no-excuses absentee voting — but Pennsylvania will not start processing mail-in ballots until Election Day. Michigan will start processing mail-in ballots — taking them out of their envelopes, marking names off the voter list, and more — the day before the election and will feed them into vote-scanning machines on Election Day.

Those states are not likely to tip the outcome of the 2020 presidential election, and historically some of the biggest post-Election Day shifts have not, either. The single biggest shift the researchers found for any state in the 1948-2016 time period was a 6.9 percentage point shift for George Wallace in his home state of Alabama in 1968, but Nixon won the state anyway.

Still, in a few places, a relatively small shift could change the state and national results.

“When you do the math, you’re not talking about big [numbers of] votes,” Stewart says. “It’s going to be outcome-determinative only under a narrow range of conditions. It’s a game of inches.”

Prof. Charles Stewart III speaks with Guardian reporter Sam Levine about what might happen after the polls close on election night. “In most states, the pace of counting and reporting is going to be slowed by a few hours. In some states, they’re going to be feeding more ballots into scanners after the polls close, and that’s going to take some time,” says Stewart. He adds that he believes we’re going to “know more than you think on election night.”