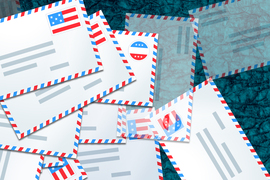 This is part 2 of a two-part MIT News series on voting research and the 2020 election. Part 1 focuses on shifts in post-Election Day vote tallies.

In elections, every vote counts. Or should count. But a new study by an MIT professor indicates that in the 2016 U.S. general election, 4 percent of all mail-in ballots were not counted — about 1.4 million votes, or 1 percent of all votes cast, signaling a significant problem that could grow in 2020.

The study quantifies the range of reasons for this, including late-arriving ballots, problems with ballot signatures and envelopes, and improperly marked ballots, among other things.

“Mail ballots tend to have more mistakes on them,” says Charles Stewart, a professor in MIT’s Department of Political Science and author of a paper detailing the study, which looks at data from all 50 U.S. states.

Voting by mail — the same thing as absentee voting — will probably be more prevalent than ever in 2020, as voters seek to avoid crowds at polling places during the Covid-19 pandemic.

“The likelihood of a vote being lost by mail is, in part, determined by how the state feels about that,” says Stewart, who is the Kenan Sahin Distinguished Professor of Political Science and head of the MIT Election Data and Science Lab. “States can put more or less effort into ensuring that voters don’t make mistakes. … There are different mail-ballot regimes, they handle the ballots differently, they operate under different philosophies of what mail balloting is supposed to achieve, and who bears the risk of mail balloting.”

The paper, “Reconsidering Lost Votes by Mail,” appears as a working paper on the Social Science Research Network, and will be published by the Harvard Data Science Review.

The concept of “lost votes” was first studied comprehensively by the Caltech/MIT Voting Technology Project (VTP) following the contested 2000 U.S. presidential election. The VTP concluded that of 107 million votes cast in 2000 — of all kinds, not just mail-in voting — between 4 million and 6 million went unrecorded. The federal Help America Vote Act of 2003 (HAVA) subsequently reduced that number to between 2 million and 3 million.

The current paper extends that line of analysis to absentee votes, and updates a 2010 Stewart study. Overall, there are three main types of problems with mail-in votes: postal issues, procedural problems involving things like signatures and ballot envelopes, and vote-scanning problems.

In the first case, about 1.1 percent of all mail-in votes are lost because of problems during the mailing process — from unfilled absentee ballot requests to the return of those ballots. Some of those lost votes represent election-administration errors, not postal issues. Stewart does not think recent reductions in U.S. Postal Service capacity will necessarily change that, although many experts are urging voters to mail in their ballots promptly.

“Postal service problems, literally the ballot not arriving, the ballot arriving late, getting lost in the office, that’s one source,” Stewart says. “But it’s probably the least important source of loss, despite all the controversy about the postal service.”

Secondly, votes can also be lost when voters handle the process incorrectly: They fail to sign ballots, are judged to have submitted mismatched signatures, or do not use the ballot’s safety envelope, among other things. About 1.5 percent of mail-in votes suffer from these problems, Stewart estimates.

“The voter can make a mistake in the certification process,” Stewarts says. “They don’t sign the envelope where they’re supposed to, they don’t seal it properly … there are all sorts of things that lead to rejected ballots.” Still, Stewart observes, “Election offices could be less persnickety about technical issues.”

The third type of problem, comprising 1.5 percent of all attempts at absentee voting, occurs when scanning machines in polling places reject ballots.

“The scanning problems, nobody really talks about because it’s the most abstract, but I think it may be the most important,” Stewart says.

This category includes voter mistakes that could be corrected in person, but lead to rejection on absentee ballots. When people “overvote,” selecting too many candidates, scanning machines catch the errors — and HAVA mandates that in-person voters can re-do the ballot.

One frequent type of overvote happens when voters redundantly add their chosen candidate’s name to the write-in line, Stewart says: “The most common reason for overvotes is people will fill in the bubble for their candidate, and then they’ll go down to the bottom and write in the name of their candidate.”

There are other ways a voter can foul up a ballot as well.

“It could be, if you’re making choices and put your pencil down next to every name, that could be picked up as a vote by the scanners,” Stewart says. “There are things you just don’t think about that could go wrong.”

The geography of lost votes

To conduct the study, Stewart used a variety of data sources, including U.S. Postal Service on-time rates, the Survey of the Performance of American Elections, the Cooperative Congressional Election Study, and the Current Population Survey of the U.S. Census Bureau.

That suggests both that voters become more proficient when they have more experience at mail-in voting, and that states may process mail ballots more effectively when it becomes routine for them. Stewart, for one, believes that election officials do an exceptional job overall.

“I’m very sanguine about the integrity of the process, from what I know about election officials,” Stewart says. Still, he acknowledges, absentee voting can be a tricky process, and a significant number of votes may be lost in 2020.

“That’s why we have a lot of voter education going on right now,” Stewart says.

How many votes will be counted after election night?