Leveraging the power of neurodiversity 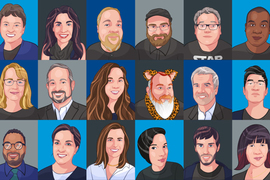 How does a small startup go head to head with the country’s largest IT consulting firms, growing rapidly and securing clients like AIG, Berkshire Hathaway, and WarnerMedia in the process? For the quality engineering startup Ultranauts, the answer lies in the power of its cognitively diverse workforce.

More than 75 percent of the company’s employees are on the autism spectrum, allowing Ultranauts to tap into the unique strengths of each team member as it helps large enterprises and mature startups improve the quality of their data, analytics, and software.

“We’re able to create value for clients in a way that few other teams can through the simple premise of tapping into a much wider range of talent and different approaches to problem solving,” Ultranauts CEO Rajesh Anandan ’95, SM ’96 says.

Now that Ultranauts, which was founded in 2013, has proven the business viability of its approach, it is keen to help other companies build on its progress.

“If you’re trying to figure out how to build more inclusive engineering and data science teams, we’re always happy to share everything we know and the practices we’ve developed,” says Anandan, who co-founded the company with Art Shectman ’95.

Of course, the best way to encourage others to emulate your approach is to have success. Even amidst the disruptions of the Covid-19 pandemic, Anandan says Ultranauts has continued to grow its revenue by 50 percent a year, and it’s currently using a funding round raised last year to accelerate growth.

“Today the organization isn’t really Art and I — we’re the old guys who need to stay out of the way,” Anandan says. “We’ve got incredibly capable colleagues at all levels of the organization. We have autistic colleagues on the leadership team, running the recruiting team, managing engineering teams, and as a result, we have a truly diverse and inclusive group that does great work.”

Proving the value of neurodiversity

Anandan and Shectman were roommates at MIT and became fast friends. Anandan, who grew up in Sri Lanka and had never owned a computer before coming to MIT, said the experience of meeting so many like-minded people was “like finding your tribe.”

After a stint at Microsoft following graduation, Anandan went into consulting at Bain and Company, and then entered the nonprofit space, first with The Global Fund to Fight AIDS, Tuberculosis and Malaria, and then with the United Nations Children’s Fund (UNICEF).

“Inspired by a UNICEF report on children with disabilities, I did some research with [the management consulting firm] Stax Inc. around opportunity and employment for communities being left out because they were perceived to have a disability. I was sharing the findings with Art, around evidence of certain skills or abilities that were going unnoticed, and describing some of the more common strengths associated with individuals on the autism spectrum,” Anandan says. “At the same time, there’s a real societal challenge around this system that continues to penalize humans for being different.”

By 2012, Shectman had been running a software engineering firm, Elephant Ventures, for eight years and was familiar with the challenge of finding good testers for new software rollouts.

“I said, ‘Find two or three people this week and we’ll hire them on Wednesday,’” Shectman recalls.

The founders didn’t have a personal connection with anyone on the spectrum, but they gained a key early ally in the CEOs of the nonprofit autism advocacy groups Integrate Advisors and GRASP, who helped them put together a job description and distributed it through the GRASP network.

Within 72 hours, the founders had 150 applications. Many of those applicants had graduate degrees, but nobody had experience in software testing. Still, the founders brought on three people, committing to learning and supporting them as they worked.

“There were a couple open questions: Could we build a commercially viable business — not a charity — that could grow and be successful?” Shectman says. “The other was could we do it fully virtually? On both fronts, the so-called experts didn’t think it was possible.”

Within a few months it was clear to the founders that the new hires were performing as well as someone who had been in the industry for years. The duo officially launched Ultranauts in the summer of 2013.

Since then the company has developed recruiting processes that evaluate candidates based on assessments and work simulations rather than relying on previous experience. Ultranauts has also focused on making its work environment as supportive as possible by doing things like distributing meeting agendas ahead of time, captioning every video meeting, and asking for daily feedback from employees.

The aspect of the company the founders are most proud of is the “universal workplace” that Ultranauts is creating, based on flexible norms like desired time equivalent work weeks, transparent decision-making including public management dashboards, and inclusive business practices that enable their fully distributed and diverse teams to do their best work.

“As a mission-driven firm, we want to create an environment where everyone can thrive,” Shectman says. “We want to empower capable humans who just haven’t had a shot before to be successful.”

“It’s a really complex ecosystem from ingestion of data into pipelines, into machine learning models, into a software product, into a user interface, and there are failure points all through that journey,” Anandan says. “Our teams are able to come in and understand that complexity and be super surgical about constructing quality checks that we’re able to automate so these disastrous failures are prevented.”

Anandan says Fortune 100 companies have chosen Ultranauts over the global consulting firms they were previously using. The startup was also recently named a finalist for MIT Solve, a social impact initiative for tech entrepreneurs.

“Looking back, I think we could have started any business based on the idea that if we create an environment where we bring different brain types together, with different learning styles and information processing models, to collaborate and focus on attacking the same problem, we’re just going to be better at it,” Anandan says.

For the founders, Ultranauts’ success stems from the company’s ability to create an inclusive work environment for diverse employees.

“That’s the secret sauce: If you can create an environment where you can take a whole bunch of people who are very different, and create conditions where they can truly use their strengths, you end up being better,” Anandan says. “It’s better for the team, it’s better for the business, and it’s better for clients.”