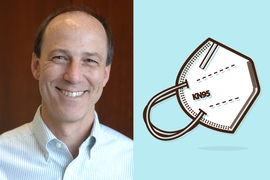 Across Massachusetts, public health officials and others are working to secure personal protective equipment (PPE) to ensure the safety of health care providers and others working directly with Covid-19 patients. N95 respirators and face masks, which are regulated by the U.S. government, have been in short supply, leading some entities and states, including the Commonwealth of Massachusetts, to secure KN95 respirators as an alternative.

KN95 respirators are regulated by the Chinese government under specifications similar to N95 respirators in the U.S., and have been approved for emergency use in some circumstances by the FDA. (N95 respirators seal against the face and protect the wearer from small-particle aerosols in the environment. Face masks are not form-fitting but protect both the wearer and those around them from splashes and exchanges of large droplets.)

To try to gauge the effectiveness of the respirators in the state’s stockpile, public health officials turned to the Massachusetts Manufacturing Emergency Response Team (M-ERT) initiative for help rapidly analyzing materials and products. At MIT, Professor Gregory Rutledge is part of that initiative; he has donated the services of his lab, which includes specialized equipment to generate and analyze aerosols, to test the filtration efficiency and breathability of materials used, or proposed for use, in respirators or masks.

Rutledge spoke with MIT News about the testing his lab is conducting, why he got involved, and the early gap his testing helped to fill. He described how entities may use this kind of data to inform decision-making and guidance, such as that issued by the Massachusetts Department of Public Health (DPH) and the Massachusetts Emergency Management Agency (MEMA) on April 24. However, he cautioned against drawing overly broad conclusions, noting that early analyses such as his involve certain limitations.

Q: Governor Charlie Baker referenced MIT’s testing of KN95 respirators in his briefing on Tuesday, and news reports have referred to those tests. Can you describe the testing your lab conducted and what you found?

A: Our lab has long been interested in the fabrication and application of nanofibrous nonwoven materials prepared by a technique called “electrospinning.” One of the most promising applications of such materials is as high-efficiency particulate air (HEPA) filters. In our research, we had previously shown that such nanofibrous filters could shift the maximum peneterating particle size (MPPS, or size of particle most likely to pass through a filter) below 100 nanometers and remove over 99 percent of  these particulates. To demonstrate this, we generate an airborne aerosol of salt particles between 20 and 300 nanometers, and then measure what percent of them are removed by the filter as the air passes through it, a property called the “filtration efficiency.” At the same time, we measure the pressure drop across the filter, which characterizes the resistance to airflow.

When the Covid-19 crisis first hit the news, there was a lot of concern over the scale of the threat, and the lack of either sufficient stockpiles or domestic manufacturing capacity to meet the demand for PPE, notably N95 respirators, over the coming weeks and months. Almost immediately, hospitals around the area and the nation were scrambling to find enough of these devices to protect their staff and patients. There was a lot of discussion around suitable alternatives, including respirators that had been certified for use elsewhere but not in the U.S., such as KN95 respirators from China.

Like the N95 respirator, KN95s are supposed to remove at least 95 percent of solid particulates below 300 nanometers, exactly the range of aerosols of interest to our lab. Unfortunately, there was also some evidence from Europe, which was a few weeks ahead of the U.S. in the pandemic, that the quality control for some KN95 respirators was not as good as it could be, leading to recalls, such as one in the Netherlands. Nevertheless, the manufacturing capacity for respirators is very strong in China, so in my view it was a logical place for the Commonwealth to look for suitable alternatives.

It soon became apparent that the Commonwealth wanted to do its own quality control of the KN95s it was receiving. In my lab, we were already testing filtration efficiency and pressure drop for alternative filter materials being considered by hospitals as ways to protect health care workers and patients. With the help of AFFOA [a manufacturing innovation institute headquartered in Cambridge] and the M-ERT, we began testing the materials used in the KN95 respirators procured by the Commonwealth from a variety of manufacturers, donations, etc.

To be clear, a respirator like an N95 or a KN95 has to satisfy a number of criteria, including the ability to form a seal against the face, and we are in no position to certify an N95 or equivalent; that full capacity resides with the federal government. However, high filtration efficiency and low pressure drop are essential properties without which the respirator cannot perform. These two criteria are ones my group has been able to review upon request by the Commonwealth.

Over the past two weeks, our lab has tested — in triplicate — over 40 different KN95s from the MEMA stockpile, at the request of the Department of Public Health. We can compare their performance in our test to that of certified N95 respirators and quickly distinguish those that might pass the N95 certification from those that would not. The latter group is still valuable in noncritical situations, but it is important to know that health care workers and first responders on the front line of the pandemic are getting the best available protection. So far, about a third of the KN95s we’ve tested appear to perform as advertised.

Q: Why is your lab at MIT involved in testing materials?

A: The battle against Covid-19 may be a marathon in the end, but in the first few weeks during which the goal was to “flatten the curve,” it has been a race against time. Everyone wants to do their part, but it is difficult to do the right thing in the absence of reliable information. This is the argument for testing. Unfortunately, the organizations that normally certify respirators for N95 performance are few and far between, and they were already experiencing long lead times due to the national scale of the pandemic. It was within this context that we realized the preliminary information we could provide on filtration efficiency and inhalation resistance could help inform the decision-makers and help them to provide the greatest protection to the largest number of people.

We felt it was essential that we ramp up as quickly and responsibly as we could to meet demand in a very dynamic situation, while at the same time ensuring that the results we provided were reliable and validated over time. In doing so, I believe we helped buy time while additional testing capacity has come on-line around the state, at MIT Lincoln Laboratory, the U.S. Army Combat Capabilities Development Command (CCDC) in Natick, and, very soon, at the University of Massachusetts at Lowell. These several labs provide complementary capabilities in testing for filtration efficiency, liquid penetration (for surgical masks), and other requirements of PPE.

I hope to be clear that our testing is not the equivalent of the official national testing conducted by the National Institute for Occupational Safety and Health (NIOSH). Likewise, we do not provide official certification or validation. However, the initial testing data we collect enables public health officials and other decision-makers to proceed with some light while they wait for the NIOSH processes to complete.

Q: What kind of reports do you provide when asked to conduct tests? How might entities use the data or information you provide?

A: MIT, through my lab’s efforts in coordination with colleagues at AFFOA and Lincoln Laboratory, is donating its testing capabilities in response to the Covid-19 pandemic, and the results are provided “as is.” While we cannot reproduce exactly the test protocols specified by NIOSH for filtration efficiency and inhalation resistance, the aerosol generated to challenge the respirator material and the conditions under which the test is performed are designed to mimic as closely as possible that which would be performed by an FDA-approved precertification facility, subject to the constraints of our equipment and the demands of the current crisis.

We only test the filtration material itself, not the design of the respirator or its “fit” to the face, nor any valves or other ancillary components. In the case of fabricated respirators such as the KN95s, our testing serves as a check against faulty or fraudulent materials of construction and offers guidance for the selection, procurement, and distribution of these devices. In other instances, our data have been used by innovation teams to develop new designs for respirators, and by manufacturers to re-engineer their product lines to increase the domestic supply chain for respirators. Such designs often deviate in significant ways from the conventional N95 we know today, and require a longer timeline to develop. We offer the flexibility to analyze such designs under different conditions of use, and we are building a database of materials performance evaluations that may subsequently be mined for filtration and flow resistance characteristics for use by the broader community of PPE developers.

Q: What have you learned from engaging in this voluntary effort over the past couple of weeks?

A: I have been most impressed by the enthusiasm and commitment with which students at MIT and the doctors, clinicians, scientists, and engineers with whom they collaborate dropped what they were doing to address shortfalls in PPE across the board, in very short timeframes. Projects to mass produce components as simple as a face shield or as complex as a ventilator are other examples. The students in the lab, working long hours in uncertain times, are the stars in most of these efforts. This crisis has galvanized a host of grassroots actvities that have moved quickly, often in parallel but toward a common set of goals. To some extent, my role has been to help channel that effort into the most productive avenues.

Q: What do you think public health officials and first responders should be most aware of?

A: Unlike the average academic, those who are on the front lines of this pandemic are trained to make decisions on a daily basis, and to make them quickly. But to make good decisions, they need good information, and they need it rapidly but responsibly. We are here to help inform those decisions as best we can with timely, reliable data.

Prof. Gregory Rutledge speaks with Wall Street Journal reporters Austen Hufford and Mark Maremont about his work testing the effectiveness of different respirator masks. “There are some good masks out there, but not all are as advertised,” says Rutledge.

MIT offers assistance to City of Cambridge during Covid-19 crisis