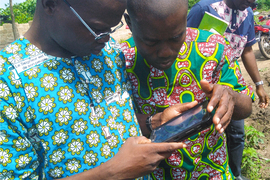 Millions of cocoa farmers live in poverty across western Africa. Over the years, these farmers have been forced to contend with geopolitical instability, predatory loan practices, and a general lack of information that hampers their ability to maximize yields and sell crops at fair prices. Other problems, such as deforestation and child labor, also plague the cocoa industry.

For the last five years, however, cocoa supply chains in villages around the Ivory Coast, Cameroon, and Ghana have been transformed. A suite of digital solutions has improved profitability for more than 200,000 farmers, encouraged sustainable and ethical production practices, and made cocoa supply chains more traceable and efficient.

The progress was enabled by SourceTrace, a company that helps improve agricultural supply chains around the world. SourceTrace offers tools to help manage and sell crops, buy and track goods, and trace products back to the farms where they were made.

Through partnerships with farmer cooperatives, financial institutions, governments, and consumer brands, SourceTrace has impacted more than 1.2 million farmers across 28 countries.

CEO Venkat Maroju MBA ’07 believes the company’s success comes from the idea that the only way to improve one part of agricultural supply chains is to improve every part.

“The whole idea of our platform is to make the agricultural value chain sustainable, predictable, profitable, equitable, and traceable,” Venkat says.

Maroju grew up in a rural region of Telangana in southern India in what he describes as “very humble beginnings.” When it rained, his school was cancelled. He also studied in the local language until 12th grade, adding to the difficulty of his college entrance exam.

Through an affirmative action program, Maroju earned admittance to an engineering university, and his English improved over the next four years. He went on to get his master’s degree at the Indian Institute of Science and later came to the United States to pursue his PhD at Old Dominion University in Virginia.

Following his PhD, Maroju stayed in the U.S., but he became active in the politics of his home region of Telangana, including in that area’s push for statehood, which was achieved in 2014.

During that time, Maroju learned a lot about the hardships associated with small plot farming, the main profession for more than 60 percent of the people in the Telangana region. Over the last two decades, such farmers have had to contend with dramatic changes to agricultural policies following the country’s economic liberalization, as well as predatory lending practices that have led to a large number of farmer suicides.

In 2005, Maroju came to MIT for his MBA with the Sloan Fellows Program. As part of his thesis, he studied microfinance in India and considered how the rise of cell phone ownership offered an unprecedented opportunity to help people in rural areas.

“I always had a lot of passion for social issues,” Maroju says. “Coming from a humble background, I’ve seen the struggles of poverty.”

When Maroju finished his thesis in 2007, it caught the attention of Gray Ghost Ventures, an impact-driven investment firm that was working with the newly formed Legatum Center for Development and Entrepreneurship at MIT. Gray Ghost brought Maroju on as an advisor, where he was introduced to a struggling technology company named SourceTrace, which offered branchless or agent banking solutions. Venkat suggested shifting SourceTrace’s focus to agriculture, and the company’s investors liked the idea.

He became CEO of SourceTrace in 2013, setting out to build new solutions to address each step of the agricultural supply chain.

“In agriculture, you can’t do anything in isolation,” Maroju says. “We always viewed it as an entire value chain, from consumer demand to nutrients used to safety of food. It all has an impact. All the players, from input suppliers to extension organizations, to buyers, processors, logistics, there’s a role to play for all of them, and we’ve always thought to make an impact you have to build end to end.”

Accordingly, SourceTrace’s platform includes features for everyone. Supply chain partners can use SourceTrace to buy crops, coordinate and track handoffs, and monitor storage conditions. Consumers can scan an item’s QR code at supermarkets and retail stores and learn about the farm where it came from, including that farm’s production processes.

Of course, the platform offers the most features to farmers, who can use it to get personalized advice on crop management, obtain fair trade and environmental certifications, monitor weather and pest attacks, and sell crops at fair market prices.

“All these solutions are targeted for businesses, governments, farmer cooperatives, financial institutions, so it’s a [business to business] software,” Maroju says. “But the common denominator is these [businesses] are all working with farmers. We’ve always focused on the farmers. I’ve always been passionate about smallholder farmers and we really want to give back.”

Focusing on the farmers

In addition to SourceTrace’s success with cocoa farmers in West Africa, the company has helped rice and maize farmers in Nigeria, grain farmers in Zimbabwe, organic cotton and spice farmers in India, seed producers in Bangladesh, and others. In total, SourceTrace’s platform is being used to improve production practices for 350 different crops around the world.

Maroju, who has been a mentor at the Legatum Center for the last several years, credits the center for helping the company scale across Africa. Today about 60 percent of SourceTrace’s farmers hail from the continent.

Much of the company’s success comes from leveraging the newly ubiquitous connectivity in developing countries and advances in smartphones. The company also uses remote sensing capabilities, artificial intelligence, blockchain, and QR codes to make its platform more effective.

But Maroju says the technologies are a means to an end: The production improvements they unlock must help farmers secure long-term buyers and higher margins. The ultimate goal of the company is transforming the lives of some of the world’s poorest people.

“It’s all about farmer livelihood,” Maroju says. “With all this technology, we enable the farmers to access the best markets wherever globally available. Then we help them optimize their inputs and make procurement processes more reliable and minimize the risk. It all comes back to the farmers.”