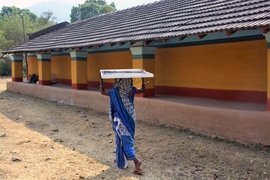 ↓ Download Image
Caption: A woman carrying a Khethworks solar panel. The efficiency of Khethworks' groundwater pump enables it to be powered by smaller panels, making the system portable.
Credits: Image courtesy of Khethworks 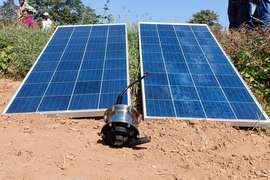 ↓ Download Image
Caption: The Khethworks system includes a submersible centrifugal solar pump, a controller, and two solar panels. To get the pump running, farmers connect the panels, pump, and controller, then connect the pump to the piping in the field, drop the pump into the water, and flip the on switch.
Credits: Image courtesy of Khethworks

Caption:
A woman carrying a Khethworks solar panel. The efficiency of Khethworks' groundwater pump enables it to be powered by smaller panels, making the system portable.
Credits:
Image courtesy of Khethworks

Caption:
The Khethworks system includes a submersible centrifugal solar pump, a controller, and two solar panels. To get the pump running, farmers connect the panels, pump, and controller, then connect the pump to the piping in the field, drop the pump into the water, and flip the on switch.
Credits:
Image courtesy of Khethworks

Toward the end of 2019, startup Khethworks began selling what the team refers to internally as “version one” of its 320-watt solar-powered water pump. The pump allows farmers in India who rely on crop harvests to feed their families to farm year-round instead of being limited to the four-month monsoon season. In just a couple of months, the product has started to change the fortunes of underserved farmers in India, lifting up families and impacting entire villages.

But getting to version one was neither quick nor easy. For Khethworks co-founder and CEO Katie Taylor SM ’15, the first product release is the culmination of an uncompromising journey, begun in 2014, to create a product that fits the lifestyles of farmers and minimizes risk for vulnerable communities.

That approach has forced Khethworks to reject easier paths to commercialization. But now that the pump is available and production processes are in place, the founders, which also include Kevin Simon SM ’15 PhD ’19 and Victor Lesniewski SM ’15, are excited to scale the deployment of a product they know can change lives.

Many farmers in rural areas of eastern India have limited access to electricity, making it difficult to use the groundwater they need to grow crops outside of monsoon season, which runs from June to September. One way to farm during dry months is to rent pumps that run on diesel or kerosene, but Taylor says that option leaves farmers with hardly any profit after the high costs of the rental and fuel.

The situation forces many farmers to leave their villages each year to pursue physically demanding migrant work after monsoon season — separating families at a time when crop prices are at their highest because supply is lower.

Taylor learned all of this during trips to eastern India as an MIT graduate student and Tata Fellow in 2013. At the time, she was working with smallholder farmers to design an inexpensive, low-pressure drip irrigation system. She quickly learned the bigger problem was accessing groundwater, so she partnered with Simon, Lesniewski, and Marcos Esparza ’15 (a co-founder who is no longer with the company), who were classmates in of hers in 2.760 (Global Engineering). The students began working nights and weekends to develop a groundwater pump that ran on the most reliable, abundant resource available to farmers during dry months: the sun.

From the start, the founders made a point of becoming intimately familiar with the existing practices and preferences of smallholder farmers.

“We didn’t create this fancy technology at MIT and then think about where it was applicable,” Taylor says. “We were taking input from farmers from day one.”

Taylor estimates she traveled to India eight times while attending classes at MIT and credits GEAR Lab Director Amos Winter, the Robert N. Noyce Career Development Assistant Professor at MIT, for encouraging students to pursue ideas outside of the classroom.

The trips made for some insightful, if difficult, moments for the founders. Taylor remembers putting the final touches on a prototype at MIT in the middle of a blizzard with a flight scheduled for later that day. The typical route to the villages where the founders conducted testing included a flight to Mumbai, another flight to Kolkata, a seven-hour train ride, and a two-hour car ride. Things rarely went as planned.

“Kevin and I had worked nights and weekends for years leading up to a launch [in February 2015],” Taylor remembers. “We’d spent so much time in the machine shop … and we finally get to this village, all the farmers are very excited — and it didn’t work the whole first day. I remember that hour-and-a-half jeep ride back from the village to our hotel being the most sad and angry I’ve ever been in my life. Since then I’ve had plenty of those ‘fun’ moments.”

From then on, the founders traveled prepared. On another occasion, when they needed to make a change to their pump, they set up a soldering machine in their hotel room with an open door for ventilation. The hotel staff, perplexed, simply pulled up chairs and watched.

After going through delta v, the summer accelerator run out of the Martin Trust Center for MIT Entrepreneurship, Taylor and Lesniewski moved to India in the beginning of 2016, while Simon stayed at MIT to pursue his PhD. Although the challenges didn’t stop when they got to India, Taylor thinks moving was a hugely beneficial decision for the company.

“The whole point of moving to India was so we could spend more time with farmers, get more feedback, manufacture in the country, build up a local team,” Taylor says. “It would be shortsighted to do all that from afar.”

Indeed, the founders have achieved a series of key milestones since moving, including securing early funding, obtaining a patent from the Indian government for their pump design, and setting up a manufacturing base in the west Indian city of Pune. Khethworks is also planning to raise more funding this year.

As the founders prepared to start selling their product, they were careful to go to market in a way that aligns with the company’s mission.

“We’ve had organizations over the years say, ‘This sounds good, give me 10,000 pumps and we’ll take care of the rest,’” Taylor says. “But sometimes, people willing to do that might not care about the execution or the follow up for repairs and things like that. We care so much about it being done responsibly that we refuse to have any risks we take fall upon the backs of the farmers. Perhaps we could have gone faster, but I’m glad we’re proceeding ethically.”

A tool for impact

From a distance, you might guess someone carrying Khethworks’ pump is going to the beach. Up closer, you’d see a farmer with a small tote bag, a controller that looks like a lunch box, and two solar panels, each roughly a quarter of a ping pong table in size.

The tote bag holds what is called a submersible centrifugal solar pump — the key to the system’s portability, low price point, and efficiency. Solar power drives the rotation of the pump’s curved, triangular channels. When the pump is dropped into water, fluid is pushed from the center axis to the ends of the channels, driving water above ground. Compared to other locally available pumps, Taylor says Khethworks’ solution is two to three times more efficient, allowing it to work with smaller, less expensive solar panels.

To get the pump running, farmers connect the panels, pump, and controller, then connect the pump to the piping in the field, drop the pump into the water, and flip the on switch.

The pump weighs under 10 pounds, and Taylor has seen elderly women carrying the solar panels with ease. Portability is essential because, in many villages, farmers sleep with their valuables to avoid theft.

About 60 farmers used the pump during trials, and Khethworks is on track to sell 100 pumps to farmers in the states of Jharkhand and West Bengal by the end of the first quarter of 2020.

For now, the company is only selling to farmers in a few areas of eastern India, where Taylor says early adopters are using the pumps to make thousands more rupees each year, a transformative amount of money for many families. Farmers also often split the cost of the pump with neighbors and share it throughout the dry season, multiplying Khethworks’ impact.

Not bad for version one. The truth is Taylor has lost track of how many versions her team has designed, but puts it somewhere in the 30 to 40 range. Even while acknowledging the hard times, she wouldn’t have it any other way.

“We’ve always had more demand than we could handle, so it’s been exciting getting this to people who have been asking for it for years,” Taylor says. “We just want to help farmers make more money. It’s simple. Now we want to make that happen at greater scales.”

3Q: Robert Armstrong on 10 years of energy research at MIT

Bringing MIT and India closer together