Caption:
The Kyrix-S system developed at MIT CSAIL makes it easier to automatically create visualizations that users can interact with dynamically.
Credits:
Image courtesy of the researchers.

Scatterplots. You might not know them by name, but if you spend more than 10 minutes online you’ll find them everywhere. They’re popular in news articles, in the data science community, and, perhaps most crucially, for internet memes about the digestive quality of pancakes.

By depicting data as a mass of points across two axes, scatterplots are effective in visualizing trends, correlations, and anomalies. But using them for large datasets often leads to overlapping dots that make them more or less unreadable.

Researchers from MIT’s Computer Science and Artificial Intelligence Laboratory (CSAIL) say they’ve solved this with a new open-source system that makes it possible to create interactive scatterplots based on large-scale datasets that have upwards of billions of distinct data points. 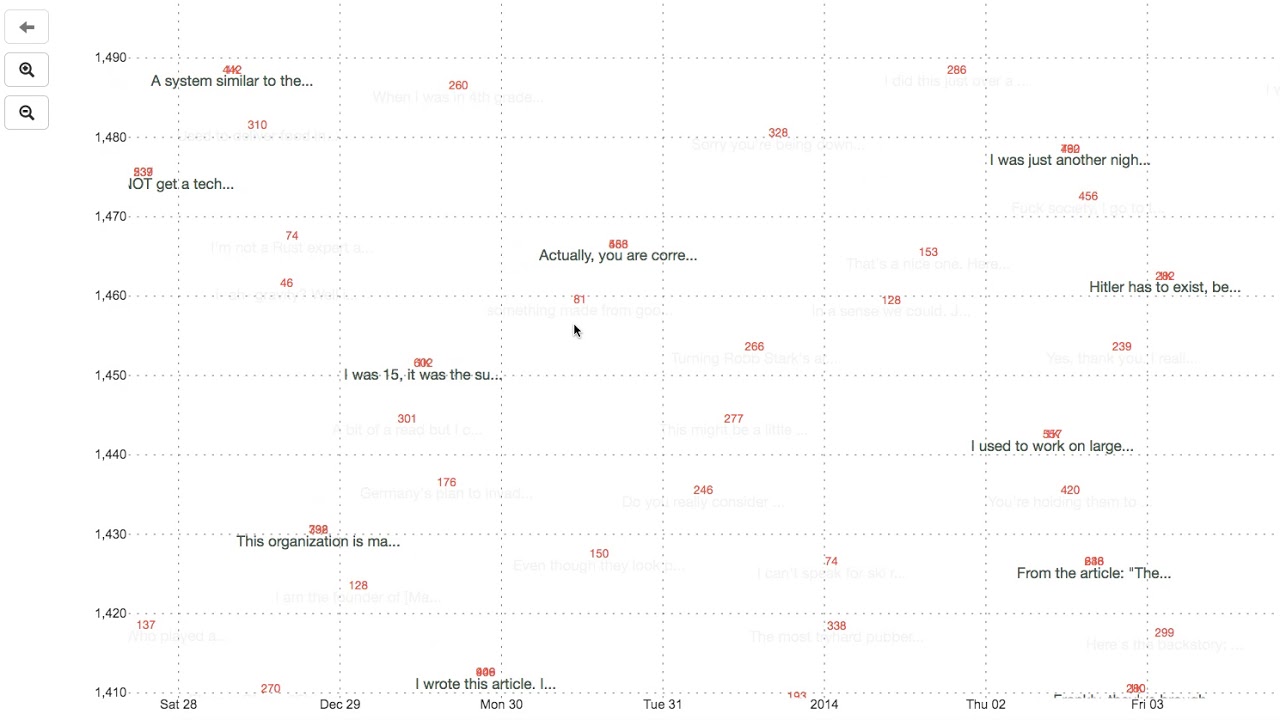 Called “Kyrix-S,” the system has an interface that allows users to pan, zoom, and jump around a scatterplot as if they were looking at directions on Google Maps. Whereas other systems developed for large datasets often focus on very specific applications, Kyrix-S is generalizable enough to work for a wide range of visualization styles, including heat maps, pie charts, and radar-style graphics. (The team showed that the system allows users to create visualizations with 800 percent less code compared to a similar state-of-the-art authoring system.)

Users can produce a scatterplot by just writing a few dozen lines of JSON, a human-readable text format.

Lead developer Wenbo Tao, a PhD student at MIT CSAIL, gives the example of a static New York Times scatterplot that he says would improve by being made interactive via a system like Kyrix-S.

“In these scatterplots, you are able to see overall trends and outliers, but the overplotting and the static nature of the plot limit the user's ability to interact with the chart,” says Tao.

In contrast, Kyrix-S can produce a version (below) that puts data in several zoom levels, enabling interaction with each county. To avoid overplotting, Kyrix-S’ scatterplot also shows only the most important examples, like the most populous counties.

Kyrix-S is currently being used by Data Civilizer 2.0, a data integration platform developed at MIT. An earlier version was also employed to help Massachusetts General Hospital analyze a massive brain activity dataset (EEG) that clocks in at 30 terabytes — the equivalent of more than 50,000 hours of digital music. (The goal of that study was to train a model that predicts seizures, given a series of 2-second EEG segments.)

Moving forward, the researchers will be adapting Kyrix-S to work as part of a graphical user interface. They also plan to add functionality so that the system can handle data that are being continuously updated.