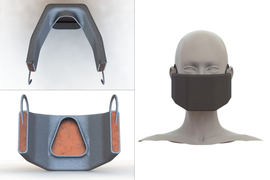 ↓ Download Image
Caption: A team of researchers from MIT now hopes to go one step further than conventional masks that filter out viruses and create a mask that inactivates viruses using heat.
Credits: Image: courtesy of the researchers

Caption:
A team of researchers from MIT now hopes to go one step further than conventional masks that filter out viruses and create a mask that inactivates viruses using heat.
Credits:
Image: courtesy of the researchers

The research described in this article has been published on a preprint server but has not yet been peer-reviewed by scientific or medical experts.

Face masks have been shown to be effective at filtering out viruses such as the SARS-CoV-2 virus, thereby reducing the risk of infection. A team of researchers from MIT now hopes to go one step further and create a mask that inactivates viruses using heat.

The researchers aim to build masks that incorporate a heated copper mesh. As the person wearing the mask breathes in and out, air flows repeatedly across the mesh, and any viral particles in the air are slowed and inactivated by the mesh and high temperatures. Such a mask could be useful for health care professionals, the researchers say, as well as members of the public in situations where social distancing would be difficult to achieve, such as a crowded bus.

“This is a completely new mask concept in that it doesn’t primarily block the virus. It actually lets the virus go through the mask, but slows and inactivates it,” says Michael Strano, the Carbon P. Dubbs Professor of Chemical Engineering at MIT.

The researchers have begun building prototypes and hope to begin testing them soon. They described the new concept and design in a paper that they posted to ArXiv, an online preprint server, and they have also submitted the paper to a peer-reviewed journal.

Strano is the senior author of the paper, and MIT graduate student Samuel Faucher is the lead author. Other authors include MIT graduate students Daniel Lundberg, Xinyao Liang, and Xiaojia Jin; undergraduate Rosalie Phillips; postdoc Dorsa Parviz; and Jacopo Buongiorno, the TEPCO Professor of Nuclear Science and Engineering at MIT.

Strano and Buongiorno started exploring concepts for new types of face masks in March, shortly after MIT ramped down on-campus research operations. They began by digging through existing scientific reports on different types of masks, and found no masks that are designed primarily to kill viruses by heating.

“The masks that we wear now are designed to capture some of the virus. They do offer protection, but there's no one really thinking about inactivating the virus and sterilizing the air. That surprised me,” Strano says.

The team set out to design a mask that would kill viruses using heat. They decided to use copper mesh as the heating and capture element, and performed some mathematical modeling to determine the optimal temperature range they would need to achieve to kill coronaviruses flowing inward or outward from natural breathing.

“The vast majority of masks today function by filtration, filtering particles by size or electric charge,” Faucher says. “This mask relies on a different mechanism and works predominantly by thermal inactivation.”

The researchers calculated how rapidly coronaviruses degrade at different temperatures and trapping conditions, and found that a temperature of about 90 degrees Celsius could achieve between a thousandfold and millionfold reduction in viral particles, depending on the final mask size. They also showed that that temperature can be achieved by running an electrical current across a 0.1-millimeter thick copper mesh or thermoelectric heater, powered by a small battery. The current prototypes include a 9-volt battery, which would provide enough power to heat the mask for a few hours and would cool the air before it is inhaled.

“Of course, we need to be mindful of the safety and comfort of mask users,” Faucher says. “The air will be cooled after viral inactivation to make the mask comfortable and safe to use.”

The researchers were able to enhance the efficiency of virus deactivation by taking advantage of the breath to create a type of reactor known as a reverse-flow reactor. As the person wearing the mask breathes in and out, the air flow continually reverses, allowing any viruses in the mask to pass over the mesh many times and making it more likely that they will be deactivated. Purified air flows out of vents on both sides of the mask.

“This design means you can wear a small mask, something that will fit on your face, but the virus can spend much more time getting deactivated than it would without the reverse flow reactor design,” Strano says.

The copper mesh is surrounded by neoprene, an insulating material that prevents the outside of the mask from becoming too hot to wear.

“Achieving the temperature for virus inactivation while thermally insulating the person’s face and ensuring acceptably cool air inhalation made for an interesting heat transfer challenge, which we resolved with neoprene insulation and regenerative heating,” Buongiorno says.

N95 respirators, surgical masks, and cloth masks are effective and should be used during the pandemic as directed, Strano says, but one potential advantage of heated masks is that because they kill the virus, they don’t need to be decontaminated or thrown away after use. Additionally, they may offer extra protection by eliminating the virus rather than only filtering it.

Heated masks would be more expensive than cloth masks or surgical masks, but they may be useful in situations where exposure risk is high and cost is less of a concern, the researchers say. They have filed for a patent on their mask design, and they plan to begin testing prototypes at MIT with collaborators.

The research was funded as a part of a project sponsored by the Office of Naval Research.

Paper: "A Virucidal Face Mask Based on the Reverse-flow Reactor Concept for Thermal Inactivation of SARS-CoV-2"

7 News reporter Byron Barnett spotlights how MIT researchers are developing new face masks aimed at stopping the spread of Covid-19. Prof. Giovanni Traverso is creating reusable masks with pop-put disposable filters, and Prof. Michael Strano is developing a mask that could “destroy the virus, using a nine-volt battery to heat the mask and kill the virus before the wearer breathes it in.”

Wall Street Journal reporter Suzanne Oliver spotlights two MIT efforts to innovate the face mask. Prof. Giovanni Traverso and his colleagues are developing a reusable, silicon-rubber mask with “sensors that give feedback on fit and functionality,” while Prof. Michael Strano has designed a version that “incorporates a copper mesh heated to about 160 degrees that traps and deactivates the virus.”

MIT researchers have developed a heated, reusable mask that could help filter out viruses such as Covid-19, reports Kayla Rivas for Fox News. “The contraption is said to slow particles down and inactivate viruses in mere seconds by the mesh and temperatures reaching 90°C, or 194°F,” writes Rivas.