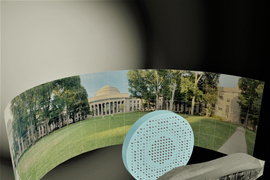 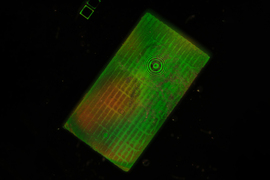 Now engineers at MIT and the University of Massachusetts at Lowell have designed a wide-angle lens that is completely flat. It is the first flat fisheye lens to produce crisp, 180-degree panoramic images. The design is a type of “metalens,” a wafer-thin material patterned with microscopic features that work together to manipulate light in a specific way.

In this case, the new fisheye lens consists of a single flat, millimeter-thin piece of glass covered on one side with tiny structures that precisely scatter incoming light to produce panoramic images, just as a conventional curved, multielement fisheye lens assembly would. The lens works in the infrared part of the spectrum, but the researchers say it could be modified to capture images using visible light as well.

The new design could potentially be adapted for a range of applications, with thin, ultra-wide-angle lenses built directly into smartphones and laptops, rather than physically attached as bulky add-ons. The low-profile lenses might also be integrated into medical imaging devices such as endoscopes, as well as in virtual reality glasses, wearable electronics, and other computer vision devices.

“This design comes as somewhat of a surprise, because some have thought it would be impossible to make a metalens with an ultra-wide-field view,” says Juejun Hu, associate professor in MIT’s Department of Materials Science and Engineering. “The fact that this can actually realize fisheye images is completely outside expectation.

Hu and his colleagues have published their results today in the journal Nano Letters. Hu’s MIT coauthors are Mikhail Shalaginov, Fan Yang, Peter Su, Dominika Lyzwa, Anuradha Agarwal, and Tian Gu, along with Sensong An and Hualiang Zhang of UMass Lowell. 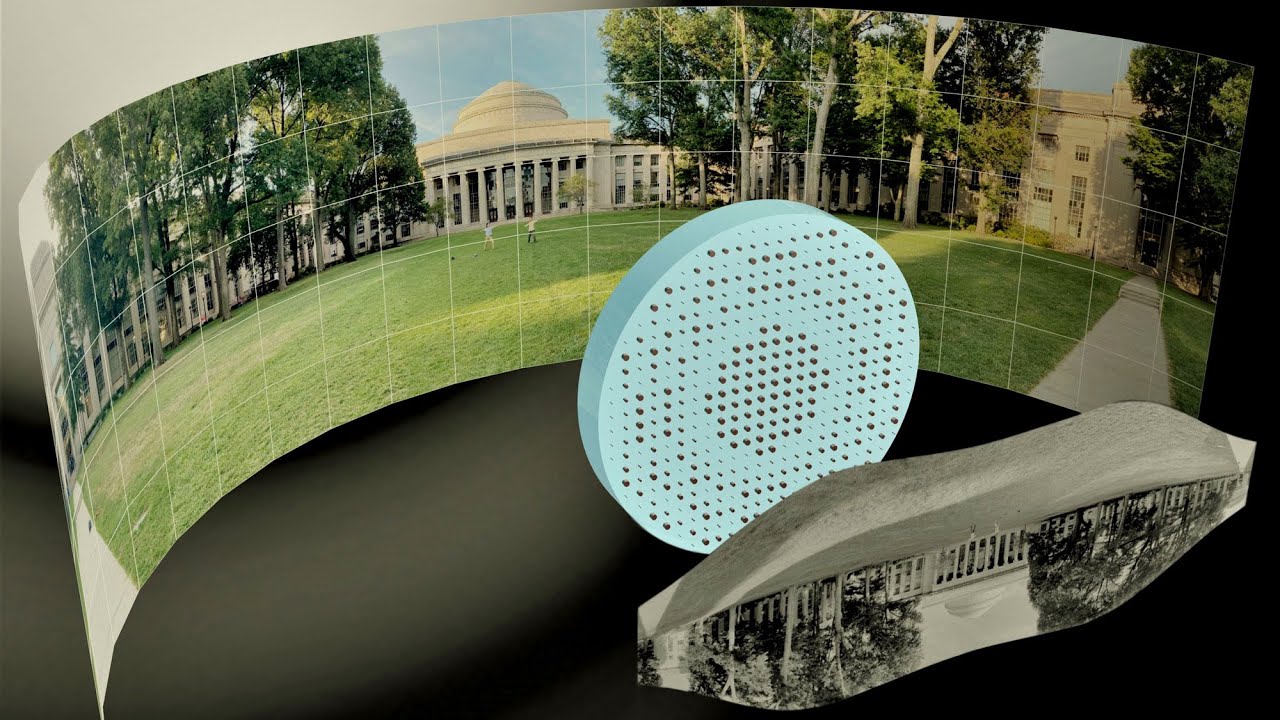 Design on the back side

Metalenses, while still largely at an experimental stage, have the potential to significantly reshape the field of optics. Previously, scientists have designed metalenses that produce high-resolution and relatively wide-angle images of up to 60 degrees. To expand the field of view further would traditionally require additional optical components to correct for aberrations, or blurriness — a workaround that would add bulk to a metalens design.

Hu and his colleagues instead came up with a simple design that does not require additional components and keeps a minimum element count. Their new metalens is a single transparent piece made from calcium fluoride with a thin film of lead telluride deposited on one side. The team then used lithographic techniques to carve a pattern of optical structures into the film.

Each structure, or “meta-atom,” as the team refers to them, is shaped into one of several nanoscale geometries, such as a rectangular or a bone-shaped configuration, that refracts light in a specific way. For instance, light may take longer to scatter, or propagate off one shape versus another — a phenomenon known as phase delay.

In conventional fisheye lenses, the curvature of the glass naturally creates a distribution of phase delays that ultimately produces a panoramic image. The team determined the corresponding pattern of meta-atoms and carved this pattern into the back side of the flat glass.

‘We’ve designed the back side structures in such a way that each part can produce a perfect focus,” Hu says.

On the front side, the team placed an optical aperture, or opening for light.

“When light comes in through this aperture, it will refract at the first surface of the glass, and then will get angularly dispersed,” Shalaginov explains. “The light will then hit different parts of the backside, from different and yet continuous angles. As long as you design the back side properly, you can be sure to achieve high-quality imaging across the entire panoramic view.”

In one demonstration, the new lens is tuned to operate in the mid-infrared region of the spectrum. The team used the imaging setup equipped with the metalens to snap pictures of a striped target. They then compared the quality of pictures taken at various angles across the scene, and found the new lens produced images of the stripes that were crisp and clear, even at the edges of the camera’s view, spanning nearly 180 degrees.

“It shows we can achieve perfect imaging performance across almost the whole 180-degree view, using our methods,” Gu says.

In another study, the team designed the metalens to operate at a near-infrared wavelength using amorphous silicon nanoposts as the meta-atoms. They plugged the metalens into a simulation used to test imaging instruments. Next, they fed the simulation a scene of Paris, composed of black and white images stitched together to make a panoramic view. They then ran the simulation to see what kind of image the new lens would produce.

“The key question was, does the lens cover the entire field of view? And we see that it captures everything across the panorama,” Gu says. “You can see buildings and people, and the resolution is very good, regardless of whether you’re looking at the center or the edges.”

The team says the new lens can be adapted to other wavelengths of light. To make a similar flat fisheye lens for visible light, for instance, Hu says the optical features may have to be made smaller than they are now, to better refract that particular range of wavelengths. The lens material would also have to change. But the general architecture that the team has designed would remain the same.

The researchers are exploring applications for their new lens, not just as compact fisheye cameras, but also as panoramic projectors, as well as depth sensors built directly into smartphones, laptops, and wearable devices.

“Currently, all 3D sensors have a limited field of view, which is why when you put your face away from your smartphone, it won’t recognize you,” Gu says. “What we have here is a new 3D sensor that enables panoramic depth profiling, which could be useful for consumer electronic devices.”

This research was funded in part by DARPA under the EXTREME Program.

Researchers at MIT and UMass Lowell have developed a completely flat fisheye camera lens. These lenses “could be used as depth sensors in smartphones, laptops, and wearables,” writes Victoria Song for Gizmodo. “The team also believes there could be medical applications—think imaging devices like endoscopes.”

MIT researchers have designed a completely flat wide-angle lens that can produce clear, 180-degree images, reports Darrell Etherington for TechCrunch. “The engineers were able to make it work by patterning a thin wafer of glass on one side with microscopic, three-dimensional structures that are positioned very precisely in order to scatter any inbound light in precisely the same way that a curved piece of glass would,” writes Etherington.

Exploring interactions of light and matter