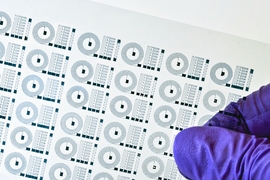 ↓ Download Image
Caption: MIT researchers have 3-D-printed soft electronically active polymers into a number of devices, including a pliable neural electrode, and (shown here) a flexible circuit.
Credits: Images: courtesy of the researchers 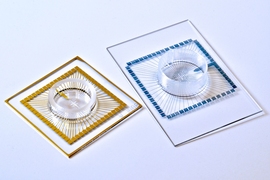 ↓ Download Image
Caption: With their new 3-D-printing technique, the team has also printed soft multi-electrode arrays that can be used to monitor the activity of individual neurons.
Credits: Images: courtesy of the researchers

Caption:
MIT researchers have 3-D-printed soft electronically active polymers into a number of devices, including a pliable neural electrode, and (shown here) a flexible circuit.
Credits:
Images: courtesy of the researchers

Caption:
With their new 3-D-printing technique, the team has also printed soft multi-electrode arrays that can be used to monitor the activity of individual neurons.
Credits:
Images: courtesy of the researchers

The brain is one of our most vulnerable organs, as soft as the softest tofu. Brain implants, on the other hand, are typically made from metal and other rigid materials that over time can cause inflammation and the buildup of scar tissue.

MIT engineers are working on developing soft, flexible neural implants that can gently conform to the brain’s contours and monitor activity over longer periods, without aggravating surrounding tissue. Such flexible electronics could be softer alternatives to existing metal-based electrodes designed to monitor brain activity, and may also be useful in brain implants that stimulate neural regions to ease symptoms of epilepsy, Parkinson’s disease, and severe depression.

Led by Xuanhe Zhao, a professor of mechanical engineering and of civil and environmental engineering, the research team has now developed a way to 3D print neural probes and other electronic devices that are as soft and flexible as rubber.

The devices are made from a type of polymer, or soft plastic, that is electrically conductive. The team transformed this normally liquid-like conducting polymer solution into a substance more like viscous toothpaste — which they could then feed through a conventional 3D printer to make stable, electrically conductive patterns.

The team printed several soft electronic devices, including a small, rubbery electrode, which they implanted in the brain of a mouse. As the mouse moved freely in a controlled environment, the neural probe was able to pick up on the activity from a single neuron. Monitoring this activity can give scientists a higher-resolution picture of the brain’s activity, and can help in tailoring therapies and long-term brain implants for a variety of neurological disorders.

“We hope by demonstrating this proof of concept, people can use this technology to make different devices, quickly,” says Hyunwoo Yuk, a graduate student in Zhao’s group at MIT. “They can change the design, run the printing code, and generate a new design in 30 minutes. Hopefully this will streamline the development of neural interfaces, fully made of soft materials.”

Yuk and Zhao have published their results today in the journal Nature Communications. Their co-authors include Baoyang Lu and Jingkun Xu of the Jiangxi Science and Technology Normal University, along with Shen Lin and Jianhong Luo of Zheijiang University’s School of Medicine.

From soap water to toothpaste

Conducting polymers are a class of materials that scientists have eagerly explored in recent years for their unique combination of plastic-like flexibility and metal-like electrical conductivity. Conducting polymers are used commercially as antistatic coatings, as they can effectively carry away any electrostatic charges that build up on electronics and other static-prone surfaces.

“These polymer solutions are easy to spray on electrical devices like touchscreens,” Yuk says. “But the liquid form is mostly for homogenous coatings, and it’s difficult to use this for any two-dimensional, high-resolution patterning. In 3D, it’s impossible.”

Yuk and his colleagues reasoned that if they could develop a printable conducting polymer, they could then use the material to print a host of soft, intricately patterned electronic devices, such as flexible circuits, and single-neuron electrodes.

In their new study, the team report modifying poly (3,4-ethylenedioxythiophene) polystyrene sulfonate, or PEDOT:PSS, a conducting polymer typically supplied in the form of an inky, dark-blue liquid. The liquid is a mixture of water and nanofibers of PEDOT:PSS. The liquid gets its conductivity from these nanofibers, which, when they come in contact, act as a sort of tunnel through which any electrical charge can flow.

If the researchers were to feed this polymer into a 3D printer in its liquid form, it would simply bleed across the underlying surface. So the team looked for a way to thicken the polymer while retaining the material’s inherent electrical conductivity.

They first freeze-dried the material, removing the liquid and leaving behind a dry matrix, or sponge, of nanofibers. Left alone, these nanofibers would become brittle and crack. So the researchers then remixed the nanofibers with a solution of water and an organic solvent, which they had previously developed, to form a hydrogel — a water-based, rubbery material embedded with nanofibers.

They made hydrogels with various concentrations of nanofibers, and found that a range between 5 to 8 percent by weight of nanofibers produced a toothpaste-like material that was both electrically conductive and suitable for feeding into a 3D printer.

“Initially, it’s like soap water,” Zhao says. “We condense the nanofibers and make it viscous like toothpaste, so we can squeeze it out as a thick, printable liquid.”

The researchers fed the new conducting polymer into a conventional 3D printer and found they could produce intricate patterns that remained stable and electrically conductive.

As a proof of concept, they printed a small, rubbery electrode, about the size of a piece of confetti. The electrode consists of a layer of flexible, transparent polymer, over which they then printed the conducting polymer, in thin, parallel lines that converged at a tip, measuring about 10 microns wide — small enough to pick up electrical signals from a single neuron.

The team implanted the electrode in the brain of a mouse and found it could pick up electrical signals from a single neuron.

“Traditionally, electrodes are rigid metal wires, and once there are vibrations, these metal electrodes could damage tissue,” Zhao says. “We’ve shown now that you could insert a gel probe instead of a needle.”

In contrast, the team’s soft electrode is made from electron-conducting nanofibers, embedded in a hydrogel — a water-based material that ions can freely pass through.

“The beauty of a conducting polymer hydrogel is, on top of its soft mechanical properties, it is made of hydrogel, which is ionically conductive, and also a porous sponge of nanofibers, which the ions can flow in and out of,” Lu says. “Because the electrode’s whole volume is active, its sensitivity is enhanced.”

In addition to the neural probe, the team also fabricated a multielectrode array — a small, Post-it-sized square of plastic, printed with very thin electrodes, over which the researchers also printed a round plastic well. Neuroscientists typically fill the wells of such arrays with cultured  neurons, and can study their activity through the signals that are detected by the device’s underlying electrodes.

For this demonstration, the group showed they could replicate the complex designs of such arrays using 3D printing, versus traditional lithography techniques, which

involve carefully etching metals, such as gold, into prescribed patterns, or masks — a process that can take days to complete a single device.

“We make the same geometry and resolution of this device using 3D printing, in less than an hour,” Yuk says. “This process may replace or supplement lithography techniques, as a simpler and cheaper way to make a variety of neurological devices, on demand.”