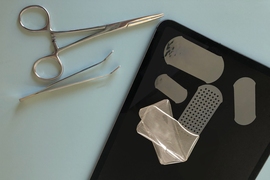 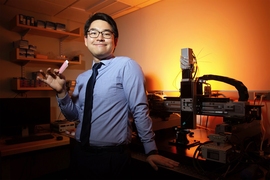 Caption:
MIT engineers have devised a double-sided adhesive that can be used to seal tissues together.
Credits:
Image: Felice Frankel, Christine Daniloff, MIT

Inspired by a sticky substance that spiders use to catch their prey, MIT engineers have designed a double-sided tape that can rapidly seal tissues together.

In tests in rats and pig tissues, the researchers showed that their new tape can tightly bind tissues such as the lungs and intestines within just five seconds. They hope that this tape could eventually be used in place of surgical sutures, which don’t work well in all tissues and can cause complications in some patients.

“There are over 230 million major surgeries all around the world per year, and many of them require sutures to close the wound, which can actually cause stress on the tissues and can cause infections, pain, and scars. We are proposing a fundamentally different approach to sealing tissue,” says Xuanhe Zhao, an associate professor of mechanical engineering and of civil and environmental engineering at MIT and the senior author of the study.

The double-sided tape can also be used to attach implantable medical devices to tissues, including the heart, the researchers showed. In addition, it works much faster than tissue glues, which usually take several minutes to bind tightly and can drip onto other parts of the body. 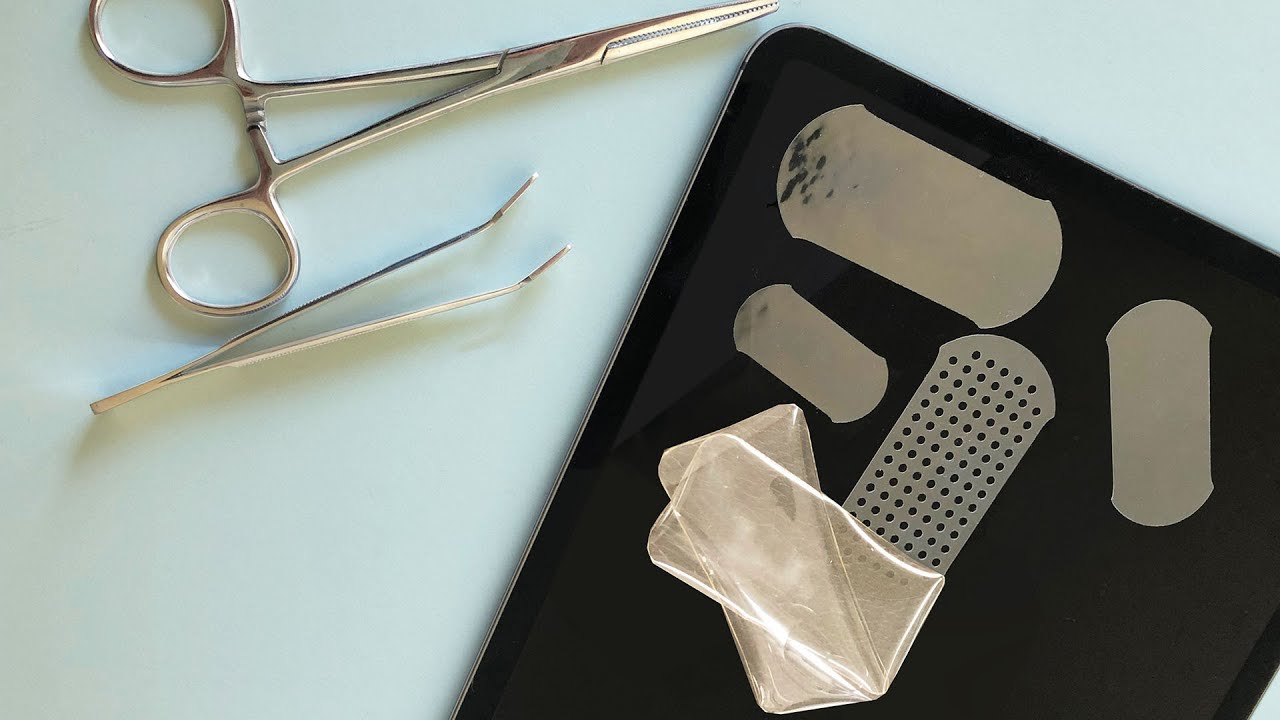 Forming a tight seal between tissues is considered to be very difficult because water on the surface of the tissues interferes with adhesion. Existing tissue glues diffuse adhesive molecules through the water between two tissue surfaces to bind them together, but this process can take several minutes or even longer.

The MIT team wanted to come up with something that would work much faster. Zhao’s group had previously developed other novel adhesives, including a hydrogel superglue that provides tougher adhesion than the sticky materials that occur in nature, such as those that mussels and barnacles use to cling to ships and rocks.

To create a double-sided tape that could rapidly join two wet surfaces together, the team drew inspiration from the natural world — specifically, the sticky material that spiders use to capture their prey in wet conditions. This spider glue includes charged polysaccharides that can absorb water from the surface of an insect almost instantaneously, clearing off a small dry patch that the glue can adhere to.

To mimic this with an engineered adhesive, the researchers designed a material that first absorbs water from wet tissues and then rapidly binds two tissues together. For water absorption, they used polyacrylic acid, a very absorbent material that is used in diapers. As soon as the tape is applied, it sucks up water, allowing the polyacrylic acid to quickly form weak hydrogen bonds with both tissues.

These hydrogen bonds and other weak interactions temporarily hold the tape and tissues in place while chemical groups called NHS esters, which the researchers embedded in the polyacrylic acid, form much stronger bonds, called covalent bonds, with proteins in the tissue. This takes about five seconds.

To make their tape tough enough to last inside the body, the researchers incorporated either gelatin or chitosan (a hard polysaccharide found in insect shells). These polymers allow the adhesive to hold its shape for long periods of time. Depending on the application that the tape is being used for, the researchers can control how fast it breaks down inside the body by varying the ingredients that go into it. Gelatin tends to break down within a few days or weeks in the human body, while chitosan can last longer (a month or even up to a year).

“Combining two innovative concepts, the research team succeeded in adhering quickly and effectively to the wet and soft surface of a tissue, and in maintaining good adhesion and mechanical properties for several days without causing too much inflammatory response,” says Costantino Creton, a research director at ESPCI Paris, who was not involved in the research.

This type of adhesive could have a major impact on surgeons’ ability to seal incisions and heal wounds, Yuk says. To explore possible applications for the new double-sided tape, the researchers tested it in a few different types of pig tissue, including skin, small intestine, stomach, and liver. They also performed tests in pig lungs and trachea, showing that they could rapidly repair damage to those organs.

“It’s very challenging to suture soft or fragile tissues such as the lung and trachea, but with our double-sided tape, within five seconds we can easily seal them,” Yuk says.

The tape also worked well to seal damage to the gastrointestinal tract, which could be very useful in preventing leakage that sometimes occurs following surgery. This leakage can cause sepsis and other potentially fatal complications.

“I anticipate tremendous translational potential of this elegant approach into various clinical practices, as well as basic engineering applications, in particular in situations where surgical operations, such as suturing, are not straightforward,” says Yu Shrike Zhang, an assistant professor of medicine at Harvard Medical School, who was not involved in the research.

Implanting medical devices within the body is another application the MIT team is exploring. Working with Roche’s lab, the researchers showed that the tape could be used to firmly attach a small polyurethane patch to the hearts of living rats, which are about the size of a thumbnail. Normally this kind of procedure is extremely complicated and requires an experienced surgeon to perform, but the research team was able to simply stick the patch on with their tape by pressing for a few seconds, and it stayed in place for several days.

In addition to the polyurethane heart patch, the researchers found that the tape could successfully attach materials such as silicone rubber, titanium, and hydrogels to tissues.

“This provides a more elegant, more straightforward, and more universally applicable way of introducing an implantable monitor or drug delivery device, because we can adhere to many different sites without causing damage or secondary complications from puncturing tissue to affix the devices,” Yuk says.

The researchers are now working with doctors to identify additional applications for this kind of adhesive and to perform more tests in animal models.

The research was funded by the National Science Foundation and the Office of Naval Research. Commercialization of the work is being supported by the MIT Deshpande Center for Technological Innovation.

Inspired by spiderwebs, MIT researchers have developed a new double-sided tape that could be used to suture wounds or surgical incisions within seconds, reports Jason Daley for Smithsonian. The researchers “designed a material that wicks away the moisture from tissues before rapidly creating a bond,” writes Daley. “To absorb water, they chose polyacrylic acid, an absorbent material used in disposable diapers.”

CBS Boston reports that MIT researchers have developed a new double-sided surgical tape inspired by the sticky substance spiders use to catch their prey. Dr. Mallika Marshall explains that the tape “absorbs water from wet tissues and binds them together in just five seconds. Then over time, the tape dissolves.”

MIT researchers have developed a new double-sided tape for tissues that could one day be used to rapidly seal wounds or incision sites after surgery, reports the BBC. The new adhesive was “inspired by the way spiders exude ‘glue’ to catch their prey in the rain.”