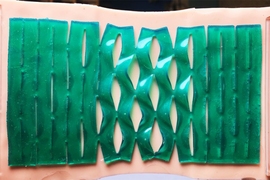 Scraped up knees and elbows are tricky places to securely apply a bandage. More often than not, the adhesive will peel away from the skin with just a few bends of the affected joint.

Now MIT engineers have come up with a stickier solution, in the form of a thin, lightweight, rubber-like film. The adhesive film can stick to highly deformable regions of the body, such as the knee and elbow, and maintain its hold even after 100 bending cycles. The key to the film’s clinginess is a pattern of slits that the researchers have cut into the film, similar to the cuts made in a paper-folding art form known as kirigami.

The researchers attached the “kirigami film” to a volunteer’s knee and found that each time she bent her knee, the film’s slits opened at the center, in the region of the knee with the most pronounced bending, while the slits at the edges remained closed, allowing the film to remain bonded to the skin. The kirigami cuts give the film not only stretch, but also better grip: The cuts that open release tension that would otherwise cause the entire film to peel away from the skin.

To demonstrate potential applications, the group fabricated a kirigami-patterned adhesive bandage, as well as a heat pad consisting of a kirigami film threaded with heating wires. With the application of a 3-volt power supply, the pad maintains a steady temperature of 100 degrees Fahrenheit. The group has also engineered a wearable electronic film outfitted with light-emitting diodes. All three films can function and stick to the skin, even after 100 knee bends.

Small, “kirigami” slits in polymer film enable the material to stick to the skin, even after 100 knee bends, compared to the same film without slits, which debonds after just one bending cycle.

Ruike Zhao, a postdoc in MIT’s Department of Mechanical Engineering, says kirigami-patterned adhesives may enable a whole swath of products, from everyday medical bandages to wearable and soft electronics.

“Currently in the soft electronics field, people mostly attach devices to regions with small deformations, but not in areas with large deformations such as joint regions, because they would detach,” Ruike says. “I think kirigami film is one solution to this problem commonly found in adhesives and soft electronics.”

Ruike is the lead author of a paper published online this month in the journal Soft Matter. Her co-authors are graduate students Shaoting Lin and Hyunwoo Yuk, along with Xuanhe Zhao, the Noyce Career Development Professor in MIT’s Department of Mechanical Engineering.

Adhesion from an art form

In August 2016, Ruike and her colleagues were approached by representatives from a medical supply company in China, who asked the group to develop an improved version of a popular pain-relieving bandage that the company currently manufactures.

“Adhesives like these bandages are very commonly used in our daily life, but when you try to attach them to places that encounter large, inhomogenous bending motion, like elbows and knees, they usually detach,” Ruike says. “It’s a huge problem for the company, which they asked us to solve.”

The team considered kirigami as a potential solution. Originally an Asian folk art, kirigami is the practice of cutting intricate patterns into paper and folding this paper, much like origami, to create beautiful, elaborate three-dimensional structures. More recently, some scientists have been exploring kirigami as a way to develop new, functional materials.

“In most cases, people make cuts in a structure to make it stretchable,” Ruike says. “But we are the first group to find, with a systematic mechanism study, that a kirigami design can improve a material’s adhesion.”

The researchers fabricated thin kirigami films by pouring a liquid elastomer, or rubber solution, into 3-D-printed molds. Each mold was printed with rows of offset grooves of various spacings, which the researchers then filled with the rubber solution. Once cured and lifted out of the molds, the thin elastomer layers were studded with rows of offset slits. The researchers say the film can be made from a wide range of materials, from soft polymers to hard metal sheets.

Ruike applied a thin­­­ adhesive coating, similar to what is applied to bandages, to each film before attaching it to a volunteer’s knee. She took note of each film’s ability to stick to the knee after repeated bending, compared with an elastomer film that had no kirigami patterns. After just one cycle, the plain, continuous film quickly detached, whereas the kirigami film maintained its hold, even after 100 knee bends.

A balance in design

To find out why kirigami cuts enhance a material’s adhesive properties, the researchers first bonded a kirigami film to a polymer surface, then subjected the material to stretch tests. They measured the amount of stretch a kirigami film can undergo before peeling away from the polymer surface — a measurement they used to calculate the material’s  critical “energy-release rate,” a quantity to evaluate detaching.

The researchers stretched kirigami films and measured their “energy release rate,” or the critical amount of stretch a film can handle before peeling away from its surface.

Through these experiments, Ruike identified three main parameters that give kirigami films their adhesive properties: shear-lag, in which shear deformation of film can reduce the strain on other parts of the film; partial debonding, in which the film segments around an open slit maintain a partial bond to the underlying surface; and inhomogenous deformation, in which a film can maintain its overall adhesion, even as parts of its underlying surface may bend and stretch more than others.

Depending on the application, Ruike says researchers can use the team’s findings as a design blueprint to identify the best pattern of cuts and the optimal balance of the three parameters, for a given application.

“These three parameters will help guide the design of soft, advanced materials,” Ruike says. “You can always design other patterns, just like folk art. There are so many solutions that we can think of. Just follow the mechanical guidance for an optimized design, and you can achieve a lot of things.”

Ruike and her colleagues have filed a patent on their technique and are continuing to collaborate with the medical supply company, which is currently making plans to manufacture medicine patches made from kirigami films.

“They make this pain-relieving pad that’s pretty popular in China — even my parents use it,” Ruike says. “So it’s super exciting.”

The team is now branching out to explore other materials on which to pattern kirigami cuts.

“The current films are purely elastomers,” Ruike says. “We want to change the film material to gels, which can directly diffuse medicine into the skin. That’s our next step.”

This research was supported, in part, by the National Science Foundation and the Tibet Cheezheng Tibetan Medicine Co. Ltd.

Researchers at MIT have developed a “kirigami” film, based off of the ancient paper-folding technique of the same name, that can be used for bandaging tricky areas like the knee or elbow, writes David Grossman for Popular Mechanics. “We are the first group to find, with a systematic mechanism study, that a kirigami design can improve a material’s adhesion,” says postdoc and lead researcher Ruike Zhao.