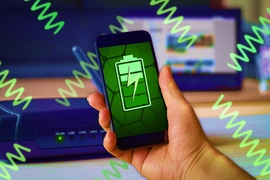 ↓ Download Image
Caption: Terahertz waves are pervasive in our daily lives, and if harnessed, their concentrated power could potentially serve as an alternate energy source.
Credits: Credit: José-Luis Olivares, MIT 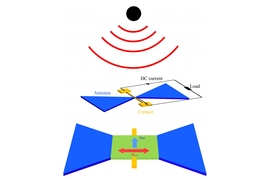 Caption:
Terahertz waves are pervasive in our daily lives, and if harnessed, their concentrated power could potentially serve as an alternate energy source.
Credits:
Credit: José-Luis Olivares, MIT

Note: This story was updated on Dec. 18 to clarify that Wi-Fi signals are in the microwave frequency range, not terahertz, as originally reported. The device described in the article would convert energy in a range of electromagnetic frequencies, including terahertz waves and microwaves, to power electronic devices such as implants. However, this energy would not be enough to charge cellphones.

Terahertz waves are electromagnetic radiation with a frequency somewhere between microwaves and infrared light. Also known as “T-rays,” they are produced by almost anything that registers a temperature, including our own bodies and the inanimate objects around us.

Terahertz waves are pervasive in our daily lives, and if harnessed, their concentrated power could potentially serve as an alternate energy source. However, to date there has been no practical way to capture and convert them into any usable form.

Now physicists at MIT have come up with a blueprint for a device they believe would be able to convert terahertz waves into a direct current, a form of electricity that powers many household electronics.

Their design takes advantage of the quantum mechanical, or atomic behavior of the carbon material graphene. They found that by combining graphene with another material, in this case, boron nitride, the electrons in graphene should skew their motion toward a common direction. Any incoming terahertz waves should “shuttle” graphene’s electrons, like so many tiny air traffic controllers, to flow through the material in a single direction, as a direct current.

The researchers have published their results today in the journal Science Advances, and are working with experimentalists to turn their design into a physical device.

“We are surrounded by electromagnetic waves,” says lead author Hiroki Isobe, a postdoc in MIT’s Materials Research Laboratory. “If we can convert that energy into an energy source we can use for daily life, that would help to address the energy challenges we are facing right now.”

Over the last decade, scientists have looked for ways to harvest and convert ambient energy into usable electrical energy. They have done so mainly through rectifiers, devices that are designed to convert electromagnetic waves from their oscillating (alternating) current to direct current.

Most rectifiers are designed to convert low-frequency waves such as radio waves, using an electrical circuit with diodes to generate an electric field that can steer radio waves through the device as a DC current. These rectifiers only work up to a certain frequency, and have not been able to accommodate the terahertz range.

A few experimental technologies that have been able to convert terahertz waves into DC current do so only at ultracold temperatures — setups that would be difficult to implement in practical applications.

Such a material would have to be very clean, or free of impurities, in order for the electrons in the material to flow through without scattering off irregularities in the material. Graphene, he found, was the ideal starting material.

Looking through the literature, he found that others had experimented with graphene by placing it atop a layer of boron nitride, a similar honeycomb lattice made of two types of atoms — boron and nitrogen. They found that in this arrangement, the forces between graphene’s electrons were knocked out of balance: Electrons closer to boron felt a certain force while electrons closer to nitrogen experienced a different pull. The overall effect was what physicists call “skew scattering,” in which clouds of electrons skew their motion in one direction.

Isobe developed a systematic theoretical study of all the ways electrons in graphene might scatter in combination with an underlying substrate such as boron nitride, and how this electron scattering would affect any incoming electromagnetic waves, particularly in the terahertz frequency range.

He found that electrons were driven by incoming terahertz waves to skew in one direction, and this skew motion generates a DC current, if graphene were relatively pure. If too many impurities did exist in graphene, they would act as obstacles in the path of electron clouds, causing these clouds to scatter in all directions, rather than moving as one.

“With many impurities, this skewed motion just ends up oscillating, and any incoming terahertz energy is lost through this oscillation,” Isobe explains. “So we want a clean sample to effectively get a skewed motion.”

They also found that the stronger the incoming terahertz energy, the more of that energy a device can convert to DC current. This means that any device that converts T-rays should also include a way to concentrate those waves before they enter the device.

With all this in mind, the researchers drew up a blueprint for a terahertz rectifier that consists of a small square of graphene that sits atop a layer of boron nitride and is sandwiched within an antenna that would collect and concentrate ambient terahertz radiation, boosting its signal enough to convert it into a DC current.

“This would work very much like a solar cell, except for a different frequency range, to passively collect and convert ambient energy,” Fu says.

The team has filed a patent for the new “high-frequency rectification” design, and the researchers are working with experimental physicists at MIT to develop a physical device based on their design, which should be able to work at room temperature, versus the ultracold temperatures required for previous terahertz rectifiers and detectors.

“If a device works at room temperature, we can use it for many portable applications,” Isobe says.

He envisions that, in the near future, terahertz rectifiers may be used, for instance, to wirelessly power implants in a patient’s body, without requiring surgery to change an implant’s batteries.

“We are taking a quantum material with some asymmetry at the atomic scale, that can now  be utilized, which opens up a lot of possibilities,” Fu says.

Popular Mechanics reporter Courtney Linder writes that MIT researchers have developed a design for a device that could convert high-frequency tetrahertz waves into a direct current. In the future, the researchers hope such a device “could be used to power implants in the human body, meaning surgery would no longer be required to change its batteries.”

Newsweek reporter Jason Murdock writes that MIT researchers have developed a blueprint for a device that could convert high-frequency terahertz waves into usable energy. "In theory, the energy could be used to power a cell phone by soaking up the ambient T-waves and using them to help charge the device via an add-on,” writes Murdock.

Turning up the heat on thermoelectrics